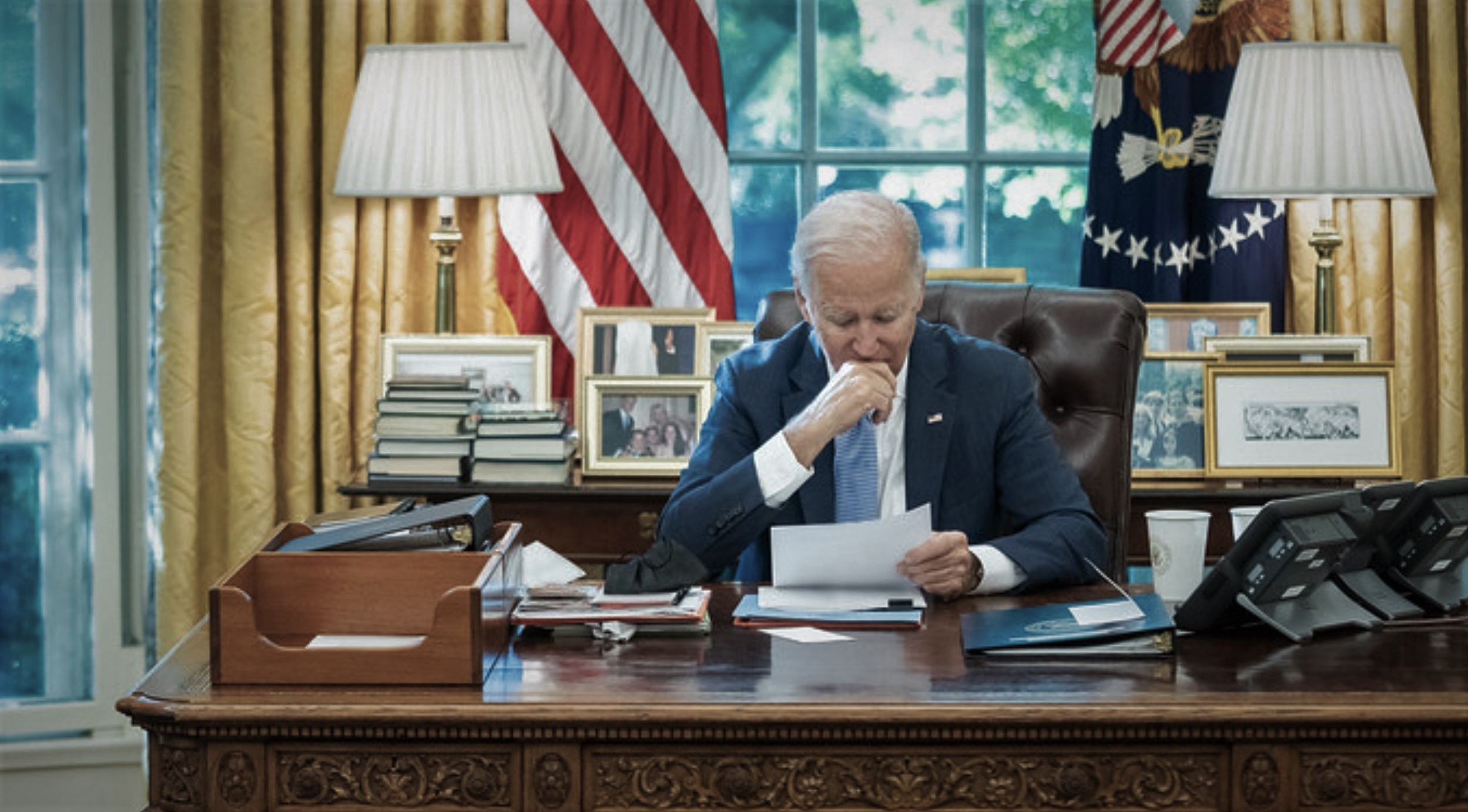 CV NEWS FEED // As President Joe Biden defended himself in a press conference against widespread complaints about his performance, CatholicVote marked the end of Year One of its “Biden Report.”

On the eve of his one-year anniversary in the White House, Biden was “defensive,” hedging against growing complaints from the public about the economy, COVID-19 policies, and inflation, according to ABC News:

With Biden facing the limits of what he can accomplish with an evenly-divided Senate, unable to get either his signature social spending package or major voting rights reform through Congress in recent weeks, and with the pandemic still raging well into its second [year], his approval rating in polls has hit an all-time low. A Jan. 12 Quinnipiac poll found his approval rating to be 33%, a 3-point drop from November.

Meanwhile, CatholicVote today concludes the first year of its “Biden Report,” a regularly-updated overview of the Biden administration’s record on issues of import to Catholic voters.

“The Biden Report: A Timeline for Catholics” launched on January 20th, 2021, the day of Biden’s presidential inauguration. On that day, CatholicVote President Brian Burch highlighted a statement from Archbishop Jose Gomez, the head of the United States Conference of Catholic Bishops:

[A]s pastors, the nation’s bishops are given the duty of proclaiming the Gospel in all its truth and power, in season and out of season, even when that teaching is inconvenient or when the Gospel’s truths run contrary to the directions of the wider society and culture.

So, I must point out that our new President has pledged to pursue certain policies that would advance moral evils and threaten human life and dignity, most seriously in the areas of abortion, contraception, marriage, and gender. Of deep concern is the liberty of the Church and the freedom of believers to live according to their consciences.

Since then, CatholicVote has updated the Biden Report every week with news items about the administration’s actions. As of now, there are over 150 entries in the timeline. Below are some of the stories that stand out.

Biden and other Democrats harshly criticized the Trump administration’s record on immigration, accusing President Donald Trump of racial animus toward refugees and of treating migrants inhumanely.

However, within months of President Biden’s inauguration, reports began revealing that the new Democratic administration was presiding over even worse catastrophes for migrants.

“Many are expressing disgust and anger at the Biden administration after a pool of journalists were finally allowed to tour and report on a migrant facility in Texas Tuesday,” CatholicVote reported in March 2021:

“Nearly 25,000 migrant children were being held apart from their families by the U.S. Government at the beginning of this month,” CatholicVote reported in May. “The minors were housed in facilities for which the Biden administration paid private contractors $3,000,000,000….”

As CatholicVote has reported throughout the first year of the Biden administration, President Biden and his Democratic allies in Congress have launched an unprecedented campaign to remove pro-life protections such as the Hyde amendment from all funding legislation. Their aim? To force taxpayers to fund abortions.

In addition, the Biden administration has regularly spoken out against pro-life Supreme Court decisions. In particular, when the Court decided in favor of Texas, allowing its Heartbeat Act to remain in effect, Biden was outraged. As CatholicVote reported:

President Joe Biden blasted the Supreme Court, as well as the law itself, after the high court declined emergency requests from abortion groups to bar the Lone Star state from enforcing the law on Sept 1. “The Supreme Court’s ruling overnight is an unprecedented assault on constitutional rights under Roe v. Wade,” Biden stated the next day. “…I am launching a whole-of-government effort to respond to this decision — looking specifically to HHS and DOJ to see what steps the federal government can take to insulate those in Texas from this law and ensure access to safe and legal abortions as protected by Roe.”

Less than a month into his administration, Biden called on Congress to quickly pass the Equality Act, which would add sexual orientation and gender identity as protected classes under the Civil Rights Act of 1964. The U.S. bishops denounced the bill, warning that it would “punish” religious groups opposed to gender ideology: “Instead of respecting differences in beliefs about marriage and sexuality, the Equality Act would discriminate against people of faith.”

“What does President Biden say about those concerns?” Jensen asked:

Psaki simply responded that Biden is a “long supporter of Roe v. Wade.”

“It has been his consistent belief that [sic] should be law and he will fight to continue to protect that as being law,” she said.

When Jensen asked if Biden will keep the Conscience and Religious Freedom Division in place at the Department of Health and Human Services “to receive conscience complaints from those doctors,” Psaki quipped: “You’ll have to talk to a future-Secretary [Xavier] Becerra once he’s confirmed.”

Many Catholic groups, including both CatholicVote and the U.S. Bishops, publicly campaigned against Xavier Becerra’s confirmation as HHS Secretary due to his long record of hostility to religious freedom. The Biden administration and its allies ignored their warnings and succeeded in confirming Becerra nonetheless.

The Biden White House remains embroiled in a scandal after it collaborated directly with a teachers union to concoct a letter that justified mobilizing the Department of Justice and the Federal Bureau of Investigations against American citizens who were expressing concerns about their children to school boards across the country.

As CatholicVote reported in October 2021, Attorney General Merrick Garland issued a statement warning darkly about a rash of “incidents” involving parents at school board meetings and threatening to “prosecute” crimes which he suggested may be committed by domestic terrorist parents. In his statement, however, he failed to mention any actual incident or crime.

Garland justified these threats by citing a letter from a national school board association implicating concerned parents and asking for the nation’s highest law enforcement agencies to invoke the Patriot Act to counter them. It was later revealed, however, that White House insiders, including Garland himself, had directly worked with the school board association to produce the letter.

Conflicts with the Church

Since January 2021, U.S. bishops have regularly found themselves in confrontations with the Biden administration over issues such as abortion, religious freedom, the human rights issues surrounding immigration, and sexuality.

As CatholicVote reported in October 2021, Archbishop Joseph Neumann of the USCCB rebuked Biden over his aggressive stances against Catholic teaching on the sanctity of life. “He likes to call himself a ‘devout’ Catholic,” Naumann said. “I would urge him to begin to act like one, especially on the life issues.”

While Biden spokeswoman Jen Psaki regularly defends the president as a “devout,” churchgoing Catholic, she has just as regularly rebuffed appeals from bishops on behalf of the unborn.

In April, a reporter raised bishops’ concerns over a new Biden policy to allow scientific experimentation on unborn children. …Psaki replied that the administration simply “disagrees” with the bishops.

At the beginning of the Biden administration, CatholicVote President Brain Burch decried the fact that America now had a Catholic president “who supports killing unborn children.”

“There is no whitewashing this: It’s a national scandal to our Church,” he said:

Of course charity and hope require that we extend our prayers for the new President. We pray for his success in all things noble and good. And yes, we also pray that his worst plans will fail miserably. As we should. Above all, we pray for his conversion. The light of baptism still flickers in his soul, despite the truly reprehensible policies he has promised. With God all things are possible!