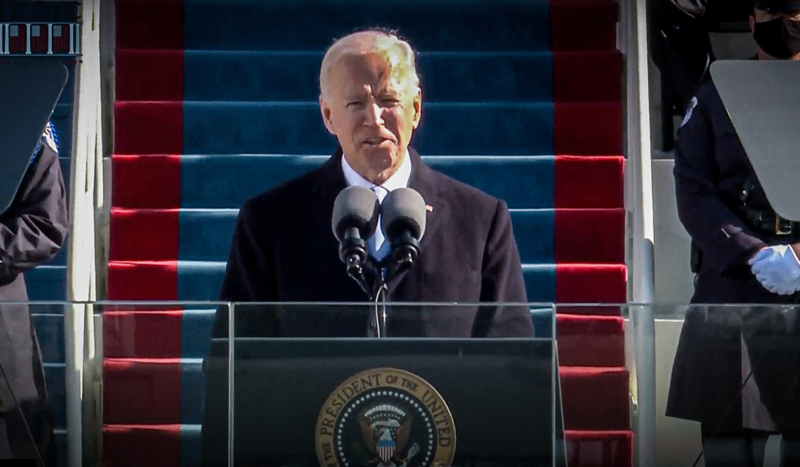 He’s got big plans, including restarting the attack on the Little Sisters, gutting core religious freedoms for our Church, penalizing Catholic schools, and shaming those who oppose him as “domestic terrorists.”

There is no whitewashing this: It’s a national scandal to our Church.

Of course charity and hope require that we extend our prayers for the new President. We pray for his success in all things noble and good. And yes, we also pray that his worst plans will fail miserably. As we should. Above all, we pray for his conversion. The light of baptism still flickers in his soul, despite the truly reprehensible policies he has promised. With God all things are possible!

In his inaugural address, President Biden spoke of the need for unity. He’s right, America is divided like never before. The cheap excuse offered by the media and the Left is to blame President Trump and his supporters. Yet anyone paying attention knows Joe Biden and the progressive Left have divided America based on race, gender, income, religion, and more for decades. Just ask Clarence Thomas.

All white people are racists. Defenders of life are enemies of women’s health. Biology is a form of bigotry. Religion is hate. Anyone who voted for Trump is an insurrectionist. We could go on…

Unity is a nice buzzword. But unity, grounded in truth, is the only thing worth defending.

Moments ago, we learned that USCCB President Archbishop Jose Gomez had prepared a statement to be released this morning. The statement welcomed the new President, but also warned Biden’s agenda would advance “moral evils” on several fronts — from abortion to transgender ideology to attacks on religious freedom.

Gomez’s statement was set to be released at 9am — just as Biden was attending Mass before his inauguration.

But according to media reports, Cardinal Blase Cupich of Chicago and Cardinal Joseph Tobin of Newark called the Vatican to intervene. These cardinals convinced the Vatican Secretary of State’s office to stop Gomez’s statement from being released.

Thankfully, The Pillar obtained a copy of Gomez’s statement:

“[A]s pastors, the nation’s bishops are given the duty of proclaiming the Gospel in all its truth and power, in season and out of season, even when that teaching is inconvenient or when the Gospel’s truths run contrary to the directions of the wider society and culture.

“So, I must point out that our new President has pledged to pursue certain policies that would advance moral evils and threaten human life and dignity, most seriously in the areas of abortion, contraception, marriage, and gender. Of deep concern is the liberty of the Church and the freedom of believers to live according to their consciences.”

As I write this, the USCCB — perhaps bowing to public pressure — has now finally released the statement in full.

The Biden presidency is an open challenge to those bishops who take seriously their role of defending the Faith and teaching the Truth.

They will be tested. Please pray for them.

If you are inclined to despair, I urge you to find solace in the lives of the saints — those who embraced the call to holiness often amidst much suffering and hardship. God rules all.

Above all, I join you today in praying for fortitude. Not brashness, and not cowardice disguised as unity. Real fortitude. The kind of fortitude the Catechism explains with this passage from Scripture:

“The Lord is my strength and my song.”

“In the world you have tribulation; but be of good cheer…”

“I have overcome the world.”

Your CV team is working hard to prepare for the weeks and months ahead. One of our biggest priorities is making sure Catholics get the full truth despite the censorship and totalitarian efforts to stifle communications. Your support is enabling us to reach millions of Catholics. Our readership is growing like gangbusters. And this is just the start! Thank you for standing with us. Onward!