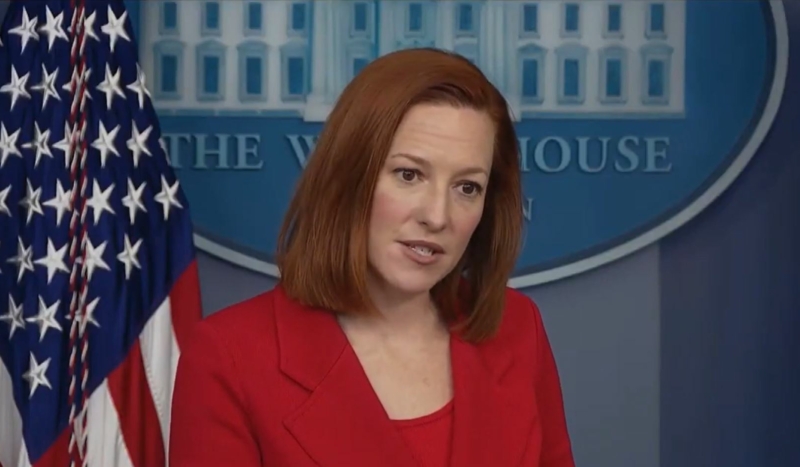 “Pro-life groups right now [are] very concerned about the phrase ‘pregnancy discrimination’ in the Equality Act,” Jensen said, “that it would force doctors to perform abortions even if it violates their conscience.”

“There are also concerns the bill would force doctors to perform gender transition surgeries and sterilizations, again, even if it violates their conscience,” he continued. “What does President Biden say about those concerns?”

Psaki simply responded that Biden is a “long supporter of Roe v. Wade.”

“It has been his consistent belief that [sic] should be law and he will fight to continue to protect that as being law,” she said.

When Jensen asked if Biden will keep the Conscience and Religious Freedom Division in place at the Department of Health and Human Services “to receive conscience complaints from those doctors,” Psaki quipped: “You’ll have to talk to a future-Secretary [Xavier] Becerra once he’s confirmed.”

The Conscience and Religious Freedom Division, established by President Donald Trump, is an office within the Health and Human Services Department. Xavier Becerra, an ardent promoter of abortion, is the Biden administration’s nominee for Secretary of the Department.

As CatholicVote has reported, there are growing bipartisan concerns over the sweeping changes to American law found in the Equality Act.

Feminist groups warn that it would spell the end of women’s rights in America. Conservative groups concur, and also warn of the legislation’s explicit self-exemption from the requirements of the Religious Freedom Restoration Act.

In addition, pro-life groups are raising alarms about the Equality Act’s inclusion of language designed to quash conscientious objections from doctors with medical or faith-based oppositions to abortion or transgender medicine.

Psaki’s deferral to the judgment of Xavier Becerra could represent a subtle warning to those expressing these concerns.

Becerra is a longtime opponent of faith organizations such as the Little Sisters of the Poor, whom he once brought to court over their faith objection to a federal mandate that would have required them to provide contraceptive and abortifacient drugs to their employees.

The Senate has not yet decided when to take up action on the Equality Act, but President Biden has urged them to “swiftly pass” the legislation.

The Senate Finance Committee is set to vote Wednesday morning on whether to confirm Xavier Becerra as Secretary of Health and Human Services.