Heroes and Zeroes of the Month, February 2022 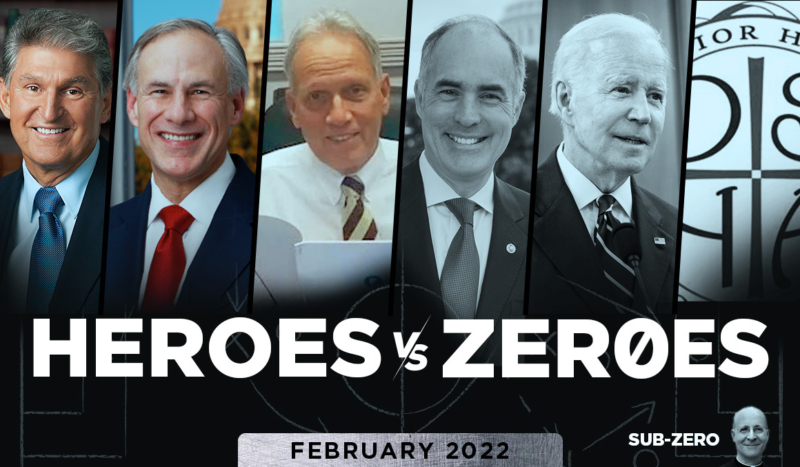 When we announced the 2021 Top 10 Courage Awards, Sen. Joe Manchin made the cut for his ironclad commitment to fiscal responsibility and for ultimately defeating  the ill-conceived Build Back Better Bill. We wondered if he could keep up his courage in 2022.

On Feb. 28, when the stakes were higher than ever, Manchin once more stood alone against his entire party and voted “Nay” on the deceptively named “Women’s Health Protection Act.” The radical bill revealed the Democratic Party’s endgame: an extreme abortion regime, stripped of all moderation and restraint and rivaling countries such as North Korea and China in its extremism.

We salute Senator Manchin once more – a true hero.

The other Catholic senators who rejected the bill also deserve recognition:

*NOTE: While we are relieved that Senators Susan Collins and Lisa Murkowski voted against the extremist bill, they also deserve a rebuke because they  introduced an alternative proposal to codify Roe v. Wade’s and Planned Parenthood v. Casey’s regime of abortion on demand until birth, but which does not go quite as far as WHPA since it would leave in place state laws that have been upheld under the Roe/Casey framework, including conscience protections.

In February, Gov. Greg Abbott affirmed that certain “sex change” procedures constitute child abuse under Texas law. In doing this, he drew the ire of every major news outlet, as well as condemnation from “human rights” organizations such as the ACLU and the Gay and Lesbian Alliance Against Defamation.

In a letter to the Texas Department of Family and Protective Services, he instructed the agency to honor the law and investigate any reports of sex change surgeries and other “gender affirming treatments.”

Gov. Abbott stood up against the powerful and followed common sense and science – a true hero for the children of Texas and the rule of law.

Beloved school principal M. Jacob “Doc” Mathius knew it was his job to do what was best for the kids – whatever the personal cost to himself. And so he lifted the mask mandate in early February.

“What I can control is relieving the burden of children wearing a covering over their faces, many of whom cannot remember a time when they attended school without having to do so. I don’t want our children to remember school… our school… like that for the rest of their lives,” he wrote in a final letter to the school community.

“As this might be my last official communication with you, I want to thank you once again for the love and support that you have shown me,” he wrote. The Archdiocese of Chicago immediately placed him on leave.

Eight days into that leave, he met with the Archdiocese. “Doc” refused to accept their conditions and was terminated.

Sen. Bob Casey’s father is remembered as a hero in the pro-life movement. One of the last Catholic Democrats to support pro-life legislation, Gov. Bob Casey, Sr.’s name is forever enshrined in the 1992 Supreme Court case Planned Parenthood v. Casey. For his bravery, President Bill Clinton banned Gov. Casey from speaking at his party’s 1992 convention.

All of that makes his son’s cowardice even more disgusting. Sen. Casey describes himself as “personally pro-life,” but has a 65% rating from Planned Parenthood, a dishonor to his father’s memory.

On Feb. 28, the Senator voted “Yea” for the so-called Women’s Health Protection Act.

Shame on him for trying to impose on America the evil his father strove so hard to eradicate.

Joining him in the walk of shame are these other Catholic senators who also voted for the radical abortion bill:

“Judge Jackson is the choice of the radical Left,” CatholicVote President Brian Burch explained. “By all indications, she will be a rubber stamp for Left-wing judicial activism that will continue to punish and penalize Catholic beliefs in the public square.”

“Judge Jackson has been nominated because she is expected to use the Court to reward the far Left with support for policies that a majority of the country opposes. When judges become legislators, among those that stand to lose the most are Catholic hospitals, schools, charities and families,” Burch said.

President Biden continues to be the most disastrous president to date in the history of the Catholic Church in America.

Although hundreds of parents have expressed concerns after discovering that the private school promotes the racialist ideas of Critical Race Theory (CRT) to students, administrators persist in promoting CRT in classrooms and teacher training. Worst of all? The school actually justifies its CRT devotion by referring concerned parents back to its Catholic identity.

For more information on Critical Race Theory and how to fight it in your school, see CatholicVote’s newly released guide here.

It wouldn’t be Heroes and Zeroes without an appearance by the chaplain of the CBS Late Show. This month, he targeted CatholicVote, calling us “insane” and “immoral.” Mounting his favorite soapbox, Fr. Martin took to Twitter shaming CatholicVote for “targeting” a “dedicated Catholic nun and bishop who work with immigrants.”

The problem, of course, is that we didn’t do those things. We actually sued the Biden administration.