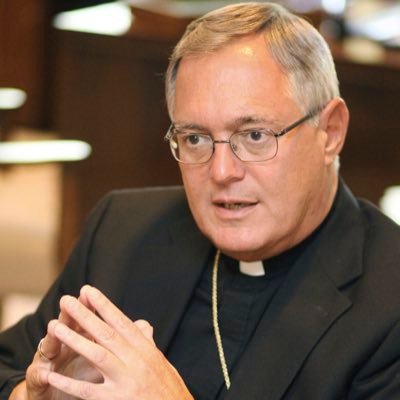 CV NEWS FEED // Bishop Thomas Tobin has called out the nation’s second Catholic president on twitter for supporting and promoting abortion in violation of church teaching.

Tobin, a Pittsburgh native who has led the Diocese of Providence since Pope John Paul II appointed him in March 2005, was responding to President Joe Biden’s statement threatening a new Texas law that bans all abortions after six weeks of pregnancy.

“‘Devout Catholic’ Joe Biden continues to fervently support and promote the death of unborn children in abortion,” Tobin wrote in the Wednesday tweet, putting quotation marks around “devout Catholic” to indicate his opposition to the self-cultivated image that Biden surrogates use to defend positions at odds with church teaching.

Catholic teaching officially prohibits abortion in every circumstance, considering it a grave sin.

As seen in the screen capture above, Tobin’s tweet responded directly to an earlier one from Biden, who declared his “deep commitment” to making war on the new Texas law that had taken effect that day.

Following his custom of ignoring bishops who criticize him for claiming devout Catholicism as he pursues anti-Catholic policies, Biden did not respond to the bishop’s tweet.

Their twitter exchange came after the U.S. Supreme Court had rejected emergency motions to stop the law, but several hours before a late-night 5-4 vote made the Court’s position even more official.

On Thursday, Biden criticized that ruling in another tweet, promising “a whole-of-government effort” to guarantee “safe and legal abortions” in Texas.

Pelosi additionally sent a flurry of tweets promoting abortion on demand and calling the ruling an “unconstitutional assault on women’s rights and health.” In one of the tweets, she promised swift passage of the Women’s Health Protection act to “enshrine into law” abortion on demand, which she sees as a fundamental human right.

Last weekend, the 5th US Circuit Court of Appeals rejected similar motions from Texas abortion providers, upholding a Texas Supreme Court ruling and setting up the US Supreme Court showdown. Those earlier decisions paved the way for the so-called “heartbeat law” that Gov. Greg Abbott signed in May to go into effect at midnight Wednesday.

Because the law’s enforcement mechanism allows pro-life activists to sue for $10,000 any abortion providers or others who help women violate the ban, critics have accused it of placing “bounties” on the heads of abortionists who disregard it.

Tobin, a Pittsburgh native known for his conservative political views, has spoken out in the past against pro-choice politicians receiving communion in his Rhode Island jurisdiction. He has also instructed Catholics not to attend LGBT pride month events in June.

Although Catholic clergy rarely divulge their political affiliations, Tobin famously announced in 2013 that he had switched his political party registration from Democrat to Republican because of their differences on legalized abortion.