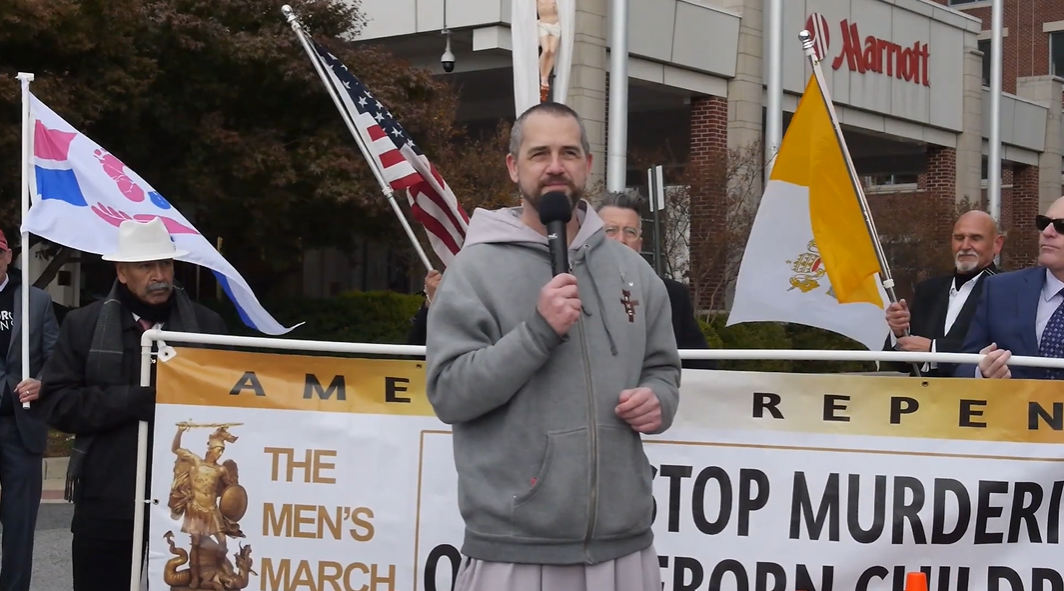 CV NEWS FEED // Father Fidelis Moscinski, 52, a priest of the Franciscan Friars of the Renewal, was found guilty Monday of violating the Freedom of Access to Clinic Entrances (FACE) Act by blocking the entrance to a New York Planned Parenthood facility in order to save the lives of unborn babies.

The Catholic priest is one of 26 pro-life Americans targeted by the Biden Justice Department under the FACE Act in the last year. By contrast, only two alleged pro-abortion vandals have been charged in connection with crimes against pro-life groups in the same span of time.

As CatholicVote reported this week,

CatholicVote has tracked 121 attacks on Catholic churches since May and 78 attacks on pregnancy resource centers and other pro-life groups in the same timeframe. From January 2022 until this week, the Justice Department had not arrested or charged a single person in connection with the rash of pro-abortion violence and terrorism.

Fr. Moscinski’s guilty verdict comes just days before the one-year anniversary of a letter the Department of Justice sent to CatholicVote President Brian Burch promising to take action against the ongoing trend of anti-Catholic violence.

Since then, America has seen a massive explosion of violent criminal behavior and threats against Catholics and other pro-life Americans. The attacks ramped up following the May 2022 leak of the Supreme Court’s decision overturning Roe vs. Wade, when radical pro-abortion terror groups explicitly called for violence against Catholic churches and pro-life pregnancy resource centers.

CatholicVote this week announced a nationwide petition calling on the Justice Department to be held accountable for its inaction and “silence” in the face of pro-abortion violence, and encouraging Congress to investigate the agency.

“On the morning of July 7, 2022, Father Fidelis Moscinski, 52, a priest of the Franciscan Friars of the Renewal, effectively shut down the Planned Parenthood of Greater New York clinic in Hempstead for about two hours, according to the DOJ,” the Catholic News Agency reported Wednesday:

Fr. Moscinski last year acknowledged blocking the Planned Parenthood entrance so that he could “talk to the mothers who were coming in that morning.”

“Imagine if you were one of those children scheduled to be executed that day,” he said in an interview with CNA. “Would you not want every possible effort to be made to save your life? And saying that something is a step too far is simply saying, ‘Well, some lives are less valuable than others; we could sacrifice only up to a point and then we’ll let these others die.’”

The court “delivered a guilty verdict from the bench,” CNA reported. “Post-conviction motions must be filed by Feb. 7, and the sentencing is scheduled for 2 p.m. on April 24.”

Editorial note: Catholic readers may find it significant that Fr. Fidelis Monscinski’s sentencing is scheduled to take place on the day the Catholic Church celebrates as the Feast Day of St. Fidelis. The founders of CatholicVote chose St. Fidelis as a patron saint of the organization at its founding. St. Fidelis is known for preaching against lukewarmness and regularly exclaiming “Woe to me if I should prove myself but a halfhearted soldier in the service of my thorn-crowned Captain,” a phrase often repeated among CatholicVote’s staff.