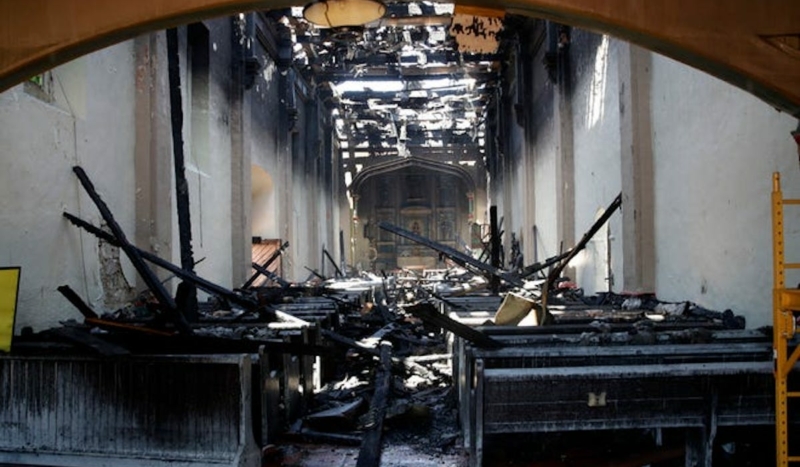 CV NEWS FEED // As civil unrest gripped the country in the aftermath of the death of George Floyd in May 2020, Catholic churches were not exempt from mobs that destroyed property in cities across America. But while the riots and looting mostly died down in the summer of 2020, the attacks on Catholic churches have continued and escalated.

Since civil unrest began on May 28, 2020, there have been at least 221 attacks against Catholic churches in the United States, including arson attacks which damaged or destroyed historic churches; spray-painting and graffiti of satanic messages; rocks and bricks thrown through windows; and statues destroyed (often with heads cut off). A new spate of at least 83 attacks has occurred since the draft Supreme Court opinion proposing to reverse Roe v. Wade was leaked in early May 2022, with many including graffiti with pro-abortion messages. Crucially, while a handful of the attacks have included thefts, the vast majority have only involved property destruction, indicating that the motive is not primarily material gain.

The attacks on Catholic churches have been widespread across the country, affecting 39 states. Hotspots with large clusters of attacks include New York City (19); Denver (10); Los Angeles (10); the D.C. area (9); Portland, Oregon (8); Seattle (7); Boston (7); Houston (4); Philadelphia (4); and Miami/South Florida (4). Some of the churches have been attacked multiple times.

Click/tap on the icons on the map to view the locations, photos, and details of each attack.

The Biden administration has thus far refused to act to protect Catholic churches and stop these acts of domestic terrorism. In December 2021, CatholicVote sent a letter to Attorney General Merrick Garland and the Department of Justice (DOJ) calling on them to act, pointing to a federal statute which requires the Attorney General to investigate and prosecute such crimes.

“The vandalism we are seeing today is quickly rising to levels that haven’t been seen since the late 1800’s and early 1900’s from organized groups such as the Know-Nothings and the Ku Klux Klan,” CatholicVote president Brian Burch wrote.

Associate Attorney General Vanita Gupta replied in a January 2022 letter promising a “15-day review to ensure that all appropriate resources are being deployed to protect houses of worship,” but since then, there has been no evidence of specific action taken by DOJ, and the attacks have continued.

After a new round of attacks and threats against Catholic churches in the wake of the Supreme Court opinion leak, Burch renewed his call to Garland and DOJ to enforce federal law and prosecute the attacks. Neither Garland nor the DOJ appear to have taken any specific action.

According to an unconfirmed report in June 2022, the Department of Homeland Security has privately warned the United States Conference of Catholic Bishops of “credible threats” against Catholic churches and clergy if and when Roe v. Wade is overturned.

A bulletin from the National Terrorism Advisory System issued on June 7, 2022 warned that it expects the “the threat environment to become more dynamic as several high-profile events could be exploited to justify acts of violence against a range of possible targets”, including “faith-based institutions” and “houses of worship”.

This post will be updated as news develops. If you are aware of an attack not found in the map, please email details and any photos to info@catholicvote.org.