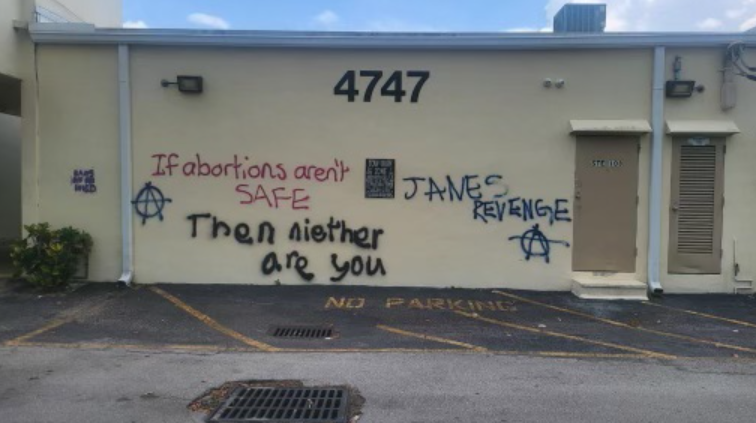 The January 24 charges came amid a CatholicVote campaign drawing attention to the DOJ’s refusal to investigate and prosecute pro-abortion terrorism, and less than 24 hours after CatholicVote announced plans to mark the one-year anniversary on January 28 of the agency’s unfulfilled promise in 2022 to take action against criminal attacks on Catholic churches.

“27-year-old Caleb Freestone and 23-year-old Amber Smith-Stewart have been indicted on federal charges for attacking anti-abortion facilities in Florida over the course of three months, including [the] Archdiocese of Miami Office of Respect Life facility in Hollywood, Florida,” Ryan J. Reilly of NBC News reported Tuesday. “‘The plan and purpose of the conspiracy was to attack reproductive health services facilities that provide abortion alternatives by spray painting threats of force,’ the indictment alleges.”

“This Saturday will mark one year since the Biden Justice Department responded to a letter from [CatholicVote President Brian Burch] asking the agency to address an alarming rise in violence against Catholic churches,” CatholicVote reported the day before the DOJ announced the charges:

Associate Attorney General Vanita Gupta wrote in a letter replying to Burch: “We share your concern with and commitment to preventing and addressing acts of vandalism, property destruction, and other incidents that target religious symbols, shrines, statues, or churches. The Department is taking numerous steps to address such violence, consistent with our commitment to combat unlawful acts of hate in all their forms.”

After Gupta’s January 28, 2022 letter, anti-Catholic attacks exploded throughout the country following the May 2022 leak of the Supreme Court’s decision overturning Roe vs. Wade.

CatholicVote has tracked 121 attacks on Catholic churches since May and 78 attacks on pregnancy resource centers and other pro-life groups in the same timeframe. From January 2022 until this week, the Justice Department had not arrested or charged a single person in connection with the rash of pro-abortion violence and terrorism.

Burch was not overly impressed with the DOJ’s announcement, but noted that the agency’s decision to bring charges against two alleged attackers came only after CatholicVote publicly confronted the administration’s failure to act.

“Regrettably it now appears that the promises made in Associate AG Gupta’s January 2022 letter were mere platitudes,” he said:

To date, the federal government has only found evidence to charge two individuals involved in a small handful of cases, despite hundreds of actual incidences of violence over the past two years. These charges only recently came to light after heavy public pressure, indicating that the more sunshine Congress shines on the indifference of the DOJ, the more likely they are to do their job.

This week’s indictment “alleges that Caleb Freestone, 27, and Amber Smith-Stewart, 23, engaged in a conspiracy to prevent employees of reproductive health services facilities from providing those services,” the DOJ stated in a press release:

According to the indictment, as part of the conspiracy, the defendants targeted pregnancy resource facilities and vandalized those facilities with spray-painted threats. According to the indictment, Freestone and Smith-Stewart, and other co-conspirators, are alleged to have spray painted threats, including “If abortions aren’t safe than niether [sic] are you,” “YOUR TIME IS UP!!,” “WE’RE COMING for U,” and “We are everywhere,” on a reproductive health services facility in Winter Haven, Florida. The indictment further alleges that facilities in Hollywood, Florida, and Hialeah, Florida, were also targeted.

Freestone and Smith-Stewart are also accused of violating the Freedom of Access to Clinic Entrances (FACE) Act “by using threats of force to intimidate and interfere with the employees” at pro-life clinics and “by intentionally damaging and destroying” one pro-life group’s property “because the facility provides reproductive health services.”

CatholicVote this week launched a nationwide petition demanding that the Department of Justice “answer for its silence.”

“The violence has affected Catholics in 41 states, with hot spots in urban areas such as New York City, Los Angeles, Denver, Washington DC, and Boston,” the petition points out. “Incidents include arson, statues beheaded, gravestones defaced with swastikas and anti-Catholic language and American flags next to them burned, and more.”

At least 78 pregnancy resource centers and pro-life offices have been attacked and vandalized since a draft Supreme Court opinion overturning Roe vs. Wade was leaked in early May 2022. Pro-abortion domestic terrorists have claimed responsibility, and delivered on their promise of a “summer of rage“ with fire-bombings, spray-paint, written threats, and intimidation.