Column: It’s the Left Using Communion as a Weapon 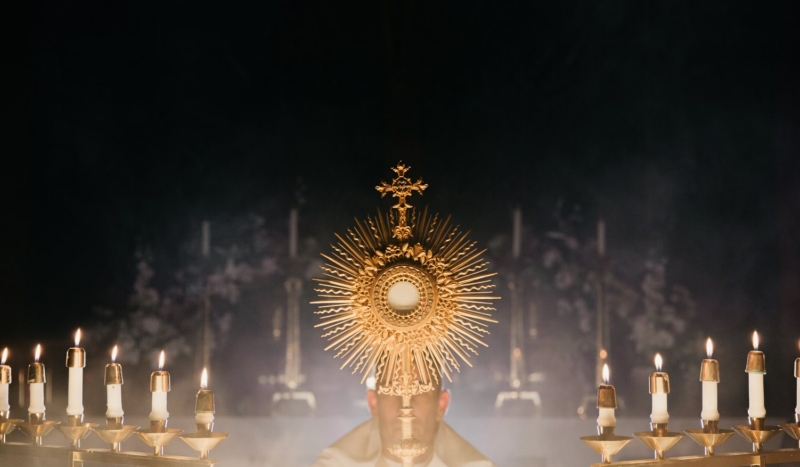 CV NEWS FEED // In a column for the Wall Street Journal, Ryan Anderson of the Ethics and Public Policy Center argued that the U.S. Bishops are right to move forward on clarifying the Church’s teachings on reception of the Eucharist by politicians who promote abortion.

Anderson began his piece with a reminder of a relevant piece of history. “In 1962, New Orleans Archbishop Joseph Rummel made waves in Louisiana politics by ordering the racial integration of Catholic schools,” Anderson explained:

He then excommunicated three community leaders, including an influential local political boss, for organizing opposition to his decision. Archbishop Rummel taught that “racial segregation is morally wrong and sinful because it is a denial of the unity and solidarity of the human race as conceived by God.” The excommunicated politician responded by pushing to end state support of Catholic schools.

There are similarities between that episode and today’s political commentary about the U.S. Bishops’ efforts to teach clearly about the Eucharist, Anderson wrote. While Pope Francis has stated that the Sacrament “is not a prize for the perfect but a powerful medicine and nourishment for the weak,” Anderson asked: “But what if ‘the weak’ deliberately champion their sin and relish confrontation with Christ’s chosen shepherds? The Eucharist is meant to help heal sinners, but that requires repentance.”

A number of Democratic opponents of the bishops’ plan to issue a teaching document on how to properly receive Communion have been quite aggressive.

Anderson gave the example of Rep. Ted Lieu, D-CA, a Democratic Congressman and Catholic who, as CatholicVote reported, recently confronted the bishops with his pro-abortion stance and added “I dare you to deny me Communion.”

“That’s not the posture of a ‘weak’ man seeking medicine and nourishment,” wrote Anderson. “That is formal, public defiance of the church in which he freely chooses membership:”

And it’s not only Mr. Lieu. Nearly 50 years after Roe v. Wade, countless Catholic political leaders proclaim that the decades-old opinion of seven Supreme Court justices trumps millennia of church teaching and a basic understanding of biology, equality and justice.

In fact, figures like Lieu are a reminder that failing “to call abortion-supporting public Catholics to account has broader pastoral implications,” Anderson wrote. “Even many Mass-attending Catholics lack faith in the real presence of Christ in the Eucharist. Treating the Mass as a social function—and reception of communion as a routine, self-determined matter—has weakened reverence for the body and blood, soul and divinity of Christ in the Eucharist.”

“In another world, this would present an earnest opportunity to teach wayward Catholics that denying Christ’s Eucharistic presence and flouting his commandments separate one from his body, the church,” Anderson continued:

Instead this all gets turned upside down. Progressives and their surrogates accuse the bishops of “politicizing” and “weaponizing” the Eucharist. They claim to be devout while denying a class of human beings legal protections—all while daring the bishops to do something about it.

Anderson cited another incident, when Rep. Jared Huffman, D-CA, threatened to strip the Church of its tax-exempt status as a “rebuke” if the U.S. Bishops dared deny Communion to pro-abortion politicians like Biden. “But this again gets it backward,” Anderson explained. “Tax-exempt status for religious institutions is meant to protect religious authority from political pressures, not the other way around.”

“Clarity on sacramental and moral theology can be viewed as politicization by politicians and the millions of Americans they represent only because two generations of Americans have been poorly catechized,” Anderson argued. “The task for the bishops is to rebuild basic moral and sacramental coherence among the faithful.”

While some oppose the bishops, “looking to the past brings reason for hope,” Anderson pointed out:

Archbishop Rummel’s example shows the potency of holding the powerful to account while recognizing and teaching basic truths to the faithful. Two of the three segregationists he excommunicated eventually repented of their racism and were received back into full communion with the church.

“Such a trajectory is the hope for those who deny the equal humanity of the unborn and so participate in the grave sin of abortion,” Anderson concluded.

Readers can find Anderson’s full essay at the Wall Street Journal, though it is viewable to subscribers only.