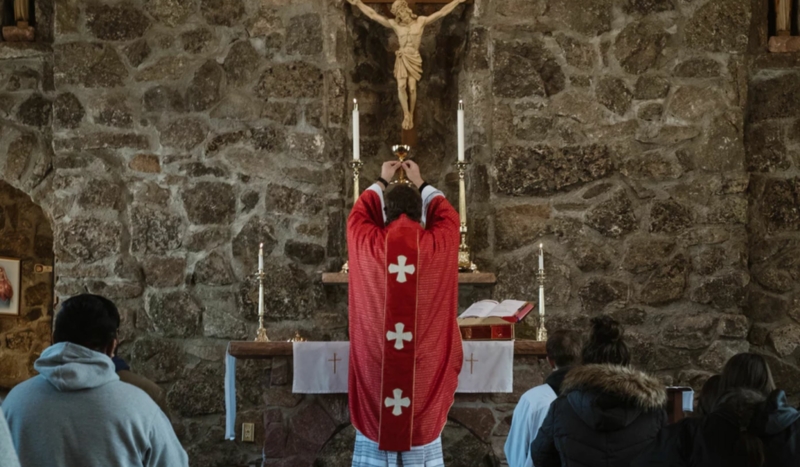 CV NEWS FEED // After the U.S. Bishops voted by an overwhelming majority in favor of drafting a teaching document on reception of the Eucharist, the Church faced an onslaught of rebukes from Democrats.

The United States Conference of Catholic Bishops (USCCB) announced the 168-55 vote tally from their Spring Assembly meeting Friday. Within hours, 60 Congressional Democrats, all professing to be Catholic, wrote a public “Statement of Principles” confronting the bishops.

“As Catholic Democrats in Congress, we are proud to be part of the living Catholic tradition,” the Democrats wrote:

…a tradition that unfailingly promotes the common good, expresses a consistent moral framework for life, and highlights the need to provide a collective safety net to those individuals in society who are the most vulnerable. As legislators in the U.S. House of Representatives, we work every day to advance respect for life and the dignity of every human being….

The letter said its signers were “committed” to “protecting the least among us,” and “recognizing the dignity of all humans.” The letter stated: “[We] agree with the Catholic Church about the value of human life.”

The letter did not, however, acknowledge that abortion directly takes the lives of preborn children, whom many Catholic leaders have counted as society’s most vulnerable members and the “least among us.”

The Letter went on to warn the bishops that denying Communion to pro-abortion politicians would “grieve the Holy Spirit:”

We believe the separation of church and state allows for our faith to inform our public duties and best serve our constituents. The Sacrament of Holy Communion is central to the life of practicing Catholics, and the weaponization of the Eucharist to Democratic lawmakers for their support of a woman’s safe and legal access to abortion is contradictory….

We solemnly urge you to not move forward and deny this most holy of all sacraments, the source and the summit of the whole work of the gospel over one issue. …To pursue a blanket denial of the Holy Eucharist to certain elected officials would indeed grieve the Holy Spirit and deny the evolution of that individual, a Christian person who is never perfect, but living in the struggle to get there.

In the less formal setting of social media, some Democrats were more confrontational, and even vitriolic.

Congressman Ted Lieu, D-CA, called the bishops “partisan hypocrites,” and shared a tweet from a Democratic activist who said if bishops “deny Biden his sacramental rights” then the Church should be stripped of its tax-exempt status.

Lieu also demanded the Eucharist himself, while rubbing his disrespect for the Church’s teachings in the bishops’ faces. “I’m Catholic,” he tweeted at the USCCB’s Twitter account. He went on to list the policy positions he promotes that contradict the Church, including same-sex “marriage” and abortion.

“Next time I go to Church, I dare you to deny me Communion,” Lieu wrote.

A number of Catholics responded to Lieu’s tweet in defense of the Eucharist and the Church.

“Since when do you get to tell the Church what to do?” asked Thomas Peters.

“Praying for you my brother, loving you, but why on Earth would you take communion when you clearly aren’t in communion?” asked Chris Smith.

“How does this help anything?” replied Chris Cardno, a Catholic Democrat. “Please, for the love of God, consider something other than your Twitter statistics. Just stop.”

“If you don’t believe in what the Church teaches and actively support the opposite, please don’t go to Communion,” wrote Angela Calabro. “You are putting your own soul in danger.”

Asked about the bishops’ decision, which many are calling a potential “rebuke” of his pro-abortion stance, President Biden told reporters: “That’s a private matter, and I don’t think that’s going to happen.”