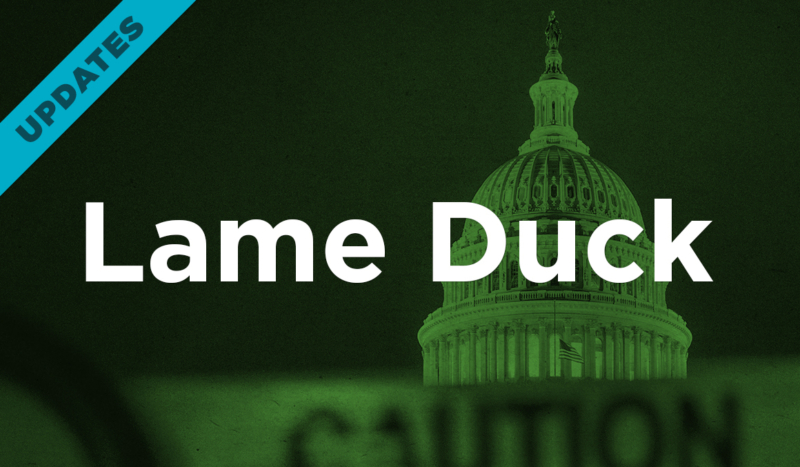 by Erika Ahern and Tom McClusky

The Congress is well into its lame duck session, but the people Americans just fired (or who retired) still have six weeks before their time is up.

Historically, lame-duck sessions are bad news for American – and Judeo-Christian – values, as we mentioned in the original article.  So far, this year is no different. Here’s your update on what they’ve “accomplished” so far, what they’re still scheming to do, and why Catholics have a vested interest in preventing it.

Passing the DisRespect for Marriage Act

This agenda item is going well for progressive Leftists. In November, the Senate passed the cloture vote for the deceptively-named H.R. 8404 “Respect for Marriage Act” (RFMA). When 12 REpublicans decided to join the Democrats in redefining marriage, the filibuster was broken and the final vote to pass the bill is due any day now.

As CatholicVote’s Erika Ahern reported, RFMA goes further than simply codifying “same-sex marriage” into law. It would mandate every state to recognize any and all marriages contracted in other states. But not just same-sex “marriages.” Any legal “marriage.”

Of greatest concern to Catholics, the religious freedom “protections” included in the Senate version of the bill are utterly inadequate. CatholicVote Director of Government Affairs Tom McClusky wrote:

“It merely states an insincere recognition of religious liberty and conscience rights, but it does not offer any meaningful protections for those rights. This leaves Catholic individuals and institutions vulnerable to countless lawsuits. Catholic schools, Catholic Charities and other institutions of faith will be vulnerable to multiple lawsuits and government harassment that could threaten their tax-exempt status and ability to serve the public.”

CatholicVote is urging Catholics to contact Senators who might be persuaded to drop their support of the bill in light of its lack of religious protections.

Or you can use CatholicVote’s Quorum page to contact these lawmakers now!

H.R. 1065, the Pregnant Workers Fairness Act (PWFA) is headed for the Senate and, given the current momentum in that chamber, will likely come to a vote during the current lame duck session. The legislation offers necessary protections for working mothers but, as we reported here, in its current form could also be used to force employers to pay for abortion-related expenses.

Pro-life Catholics and their allies should advocate vigorously now for Congress to add clear language that excludes abortions and offers robust conscience-rights protections. Otherwise, the support that PWFA offers for pregnant women could sentence Catholic and other religious organizations to years of litigation.

Democrats have also called on Congress to raise the debt ceiling during the lame duck session. Raising the limit on the national debt would give the incoming Congress (and the Democrat-controlled Senate) a blank check on federal spending for the next four years.

As Dr. Kevin Roberts of the Heritage Foundation notes:

Congressional Republicans should absolutely fight to defend the statutory debt limit this year and leverage it next year to extract badly needed spending reforms from President Joe Biden and his party.

The key to the Democratic agenda for the lame-duck session is the massive, omnibus spending bill being crafted by retiring Senators Patrick Leahy, D-VT, and Richard Shelby, R-AL.

Because Congress has failed to fund the American government through a regular process of appropriations, keeping the lights on can only happen in two ways: short-term “continuing resolutions” that simply maintain the status quo, or bloated “omnibus bills”.

The last omnibus bill to head to the Senate totalled 2,741 pages and allocated $1.5 trillion in spending. Packed into every omnibus are billions of dollars in hand-outs and bills that, were they to be debated on their own merits, would ordinarily fail on the Senate floor.

No living person can read the bill, let alone challenge its contents, in the two or three days Senators are given to decide whether or not to vote. It’s a “you’ll know what’s in the bill once you pass it” scenario, and gives Congress a Sophie’s choice: either pass this bill or be responsible for a government shut-down right before Christmas.

The lame-duck omnibus on the table will act as a Trojan horse for extreme Democrat policies (see the next 9 bills) while also determining the government’s budget well into the new Congress’s term. It’s the perfect way to hamstring the incoming party before they even set foot on the Hill.

Other Bills to Watch

This past June, Democrats added compulsory registration for females for Selective Service to the proposed National Defense Authorization Act (NDAA). The Senate Armed Services Committee added a requirement for women to register for the draft in a 20-6 vote. Supporters of the provision claim that drafting women is a “necessary and fair step” towards equity and equality.

Drafting America’s daughters is a pet project of many exiting Democrats, and inserting the NDAA into the omnibus is a likely priority after the midterms. The Military Times reported on October 13 that the Army will be 25% short of its recruiting goal for 2022.

In layman’s terms, this means that any employer, business, or medical professional whose sincerely held religious beliefs prohibit them from prescribing or paying for contraceptives is depriving Americans of a fundamental right.

And will be prosecuted.

Three bills that passed the House but never made it through the Senate are waiting in the wings for the lame-ducks.

H.R. 8297. the ”Ensuring Women’s Right to Reproductive Freedom Act,” was the July 2022 follow-up to the defeated Women’s Health Protection Act (H.R. 8296). Together, the two bills represent the most extreme abortion legislation on record, enshrining the so-called “right” to abortion into federal law, undoing all existing limitations to abortion through the states, and essentially making pro-life legislation illegal.

The United States bishops have warned that this legislation“would force all Americans to support abortions here and abroad with their tax dollars,” and “would also likely force health care providers and professionals to perform, assist in, and/or refer for abortion against their deeply-held beliefs, as well as force employers and insurers to cover or pay for abortion.”

The deceptively-named “Equality Act” (H.R. 5) contains language that would change federal law to undercut the Hyde Amendment, which prohibits funding abortions with federal taxpayer dollars. Even supporters of the bill admit it is about far more than LGBT “rights.”

“We need to make sure we don’t seem to be sneaking anything [illegal] into a bill while at the same time we need to… understand that the reproductive rights movement [is one of our] greatest allies,” noted Mara Keisling of the National Center for Transgender Equality.

Ensure a Leftist Takeover of the Election System

Outgoing Democrats will likely push for bills that shift the goal posts ahead of the 2024 election cycle. Two acts in particular, the John Lewis Voting Rights Advancement Act (H.R. 4) and the For the People Act (H.R 1) are crafted to limit the voice of grassroots organizations and activists.

H.R. 1 places onerous burdens on political organizations that request their supporters to contact Congress or a government agency to voice their opinions or concerns.

“In a business where the best way to mobilize grassroots efforts is through simple, one step requests, the bill adds so many steps and regulations that it would essentially stifle activists across the country,” said Tom McClusky.

Everything that favors conservatives and free speech is penalized in these bills, and everything that statistically favors leftist politics is expanded.

Destroy Small Business in the Name of Women’s Lib

Congresswoman Rosa DeLauro, D-CT, of the House Education and Labor Committee, sponsored the Paycheck Fairness Act (H.R. 7) to address “wage discrimination on the basis of sex, which is defined to include pregnancy, sexual orienation, gender idetntity, and sex characteristics.”

The mechanism by which DeLauro proposes to achieve wage equity is to further micromanage how businesses determine what to pay their workers.

For example, the bill employers from pointing to an employee’s wage history when justifying pay differences in wage-discrimination claims. The legislation places damaging legal burdens on hospitals, schools, and small businesses without addressing the issue of wage gaps.

Put simply, the bill does more to increase the salaries of elite corporate lawyers than it does to ensure just wages for blue-collar women.

Keep watching the current Congress. The lame-ducks have time to kill before leaving office, but they still work for you.

(NB: Because proxy voting is still in play, Democrats don’t actually have to show up in Washington, DC, to push these agendas through. These ducks will be voting from the comfort of their holiday homes.)