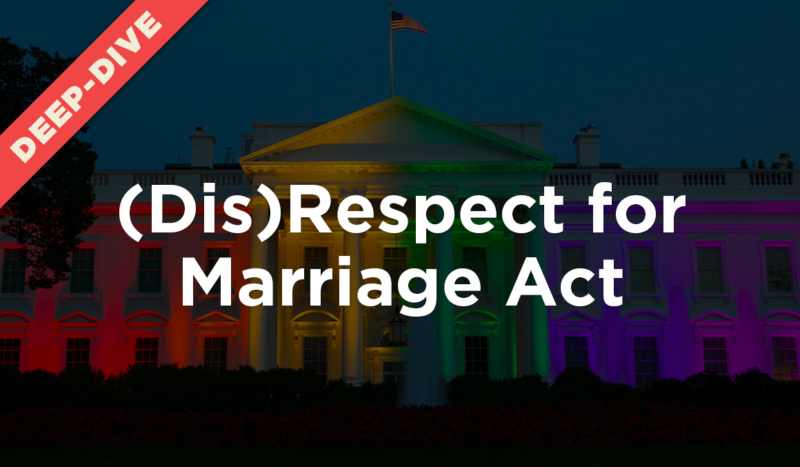 The law is a teacher, and the Respect for Marriage Act would convey one clear lesson: Americans who defend natural marriage are no longer welcome in this nation.

Here is your guide to the Act and why Catholics must take action to prevent its passage in the Senate.

Senate Democrats Dianne Feinstein, D-CA, Tammy Baldwin, D-WI, and Susan Collins, R-ME, introduced H.R. 8404 – the Respect for Marriage Act (RFMA) on July 19 in a bid to repeal the 1996 Defense of Marriage Act (DOMA) and cement into federal law Obergefell vs. Hodges, the 2015 Supreme Court decision that imposed a redefinition of marriage in all 50 states.

Companion legislation has already passed the Democrat-led House with the support of 47 House Republicans.

If the Senate passes this bill, President Joe Biden has vowed he would sign it into law.

To make it out of the Senate and onto President Biden’s desk, H.R. 8404 requires 60 votes to proceed.

This means at least 10 Republicans must join all 50 Democratic senators in voting first to let the bill come to a vote (known as “cloture”), after which a simple majority of 51 would pass the RFMA into law.

According to CatholicVote Director of Government Affairs Tom McClusky, a vote is expected before the August recess, and if that vote is unsuccessful Democrats may attempt another vote before the midterm elections.

The misleadingly-named Respect for Marriage Act started out as little more than a publicity stunt, but if it passes the Senate it will actually threaten all Americans who truly do respect marriage.

A number of misconceptions have been peddled about this legislation. For example, the bill does not simply “codify” Obergefell vs. Hodges into federal law – although should the Supreme Court strike down Obergefell, RFMA would force every state to continue to recognize “gay marriages” from every other state. Read on for a list of misconceptions, and the truth about each.

RFMA goes further than Obergefell or its predecessor U.S. vs. Windsor (2013). It repeals DOMA in its entirety and would therefore mandate every state to recognize any and all marriages contracted in other states.

But not just same-sex “marriages.” Any legal “marriage.”

Under RFMA, the federal government will recognize any marriage that is “valid in the state” in which “it was entered into” without discriminating based on “sex, race, ethnicity, or national origin.”

In other words, if California redefined marriage to include groupings of three or four persons, every state would be required to recognize that as a marriage. In the same way, if Utah reinstated legal polygamy, those marriage licenses would also be federally recognized and every other state forced to honor those contracts.

Furthermore, RFMA imposes brand new and sweeping enforcement mechanisms, threatening Americans who hold and live by the sincere belief that marriage is between one man and one woman for the sake of children.

RFMA establishes a private right of action – deputizing individuals to bring a federal lawsuit against “state agents” who disregard out-of-state marriage licenses or “the rights or claims arising from them.” It also allows the U.S. Attorney General to bring civil action against dissenters.

The key here is that the term “state agents” is not confined to clerks like Kim Davis or state social work agencies like Child Protective Services. “State agents” has been interpreted by the Supreme Court (cf. Brentwood Academy vs. Tennessee Secondary School, 2001) to apply to organizations that

Charities, schools, and other groups would be liable under RFMA if they refused to recognize same-sex, underage, polygamous, polyandrous, or polyamourous marriage licenses. Foster care and adoption charities, faith-based shelters and emergency housing organizations, and religious organizations that cooperate with the state to serve the poor would all be on the chopping block.

Clearly, RFMA threatens to increase the legal liability of individuals and institutions with sincerely held religious beliefs about marriage.

How They Justify It

Nearly every House Democrat who rose in support of the bill cited “marriage equality” for same-sex couples as the primary goal of RFMA. The Constitutional foundation being used to justify the bill’s radical enforcement policies is the “full faith and credit” clause.

This clause requires states to grant “full faith and credit” to the “public acts, records, and judicial proceedings” of other states. On face value, this is a perfectly Constitutional law that should stand up to any challenges in court.

But marriage laws go far beyond “public acts, records, and judicial proceedings.” They are not like a driver’s license, which does allow for a “lowest common denominator” approach (although states with stricter laws may balk at permitting out-state-drivers more lenient rules). The government does not create a “right to marry” any more than it creates a “right to life.”

Legal marriage is the state’s recognition of a reality that precedes the government and upon which its survival ultimately depends – the formation of the family.

When a matter touches on the very core of what it means to be human, the power to accept or reject true marriage should be reserved for the people alone by referendum or their local state legislatures – and not co-opted by Congress, the Supreme Court, or the president.

RFMA is a reaction to the June 26 ruling in Dobbs vs. Jackson that overturned Roe vs. Wade. During the House debate over the bill, Justice Clarence Thomas’ concurrence was mentioned multiple times as posing a threat to “marriage equality” – including “marriage rights” for same-sex couples and even interracial couples (fully realizing that was not one of the circumstances Justice Thomas mentioned and ignoring the fact that he himself just celebrated 25 years of his own interracial marriage).

What Justice Thomas in fact called for was a re-examination of all Court cases that relied on the principle of “substantive due process” – a principle that Dobbs has declared unconstitutional. These cases include Griswold vs. Connecticut (1965) and Obergefell, whose jurisprudence represents the extreme of legislating from the bench.

In the current political climate of divisions, emotional manipulation, and distrust of American institutions, Leftist politicians have seized upon Justice Thomas’ concurrence to push through an extreme piece of legislation under the guise of “marriage equality.” RFMA is the perfect midterm profile-raiser for Democrats desperate to retain their base and Republicans terrified of the Twitter mob’s wrath.

The deceptively-named Respect for Marriage Act is an election-year stunt by Democratic lawmakers to play on the fears and misinformation running rampant after the fall of Roe vs. Wade. Going far beyond codifying Obergefell, the bill opens the door for the Leftist establishment to prosecute and persecute Americans of faith.

Catholics and their allies must not stand by and hope that this bill dies in the Senate. They must speak now, because the law is a teacher and this particular law carries a very long ruler.

Write to your Senators today.