8 Times the Supreme Court Made Up Its Own Constitution 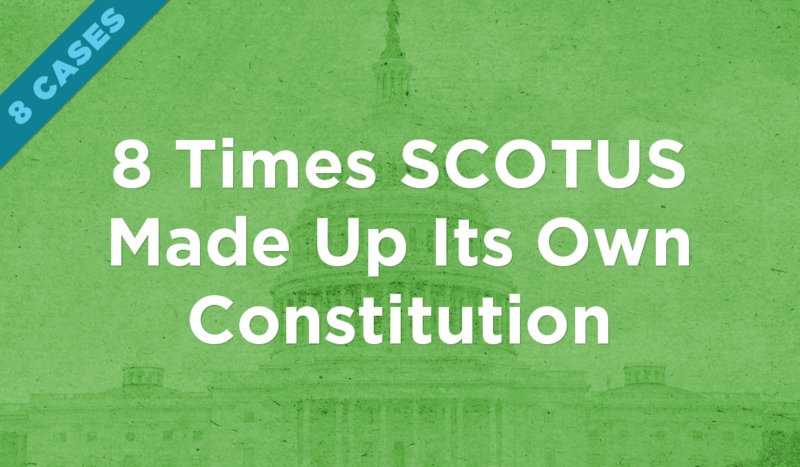 But in my view the function of this Court is to preserve our society’s values regarding (among other things) equal protection, not to revise them; to prevent backsliding from the degree of restriction the Constitution imposed upon democratic government, not to prescribe, on our own authority, progressively higher degrees… The people may decide to change… tradition… through democratic processes; but the assertion that either tradition has been unconstitutional through the centuries is not law, but politics smuggled into law.

The temptation to legislate from the bench is strong in the United States Supreme Court. Since its founding, justices have been tempted –and often succeeded – to consult their own ideologies, party interests, policy preferences, personal philosophies, and other extra-Constitutional values.

We saw this in Dred Scott, Plessy v. Ferguson, and throughout the 20th century in cases pertaining to the death penalty, school prayer, and more.

But it seems that nothing inspires judicial overreach like sex.

Here are 8 times the Supreme Court majority made up its own Constitutional rights about sex – and the dissenting justices’ wittiest comebacks.

And before we being, here’s a quick refresher on what the 14th Amendment actually says (it’s going to be important):

No State shall make or enforce any law which shall abridge the privileges or immunities of citizens of the United States; nor shall any State deprive any person of life, liberty, or property, without due process of law; nor deny to any person within its jurisdiction the equal protection of the laws.

Title VII (a portion of the 1964 Civil Rights Act) prohibited employers from discriminating based on a person’s sex. The Court in Bostock expanded the definition of “sex” to include “sexual orientation and/or gender identity” – thus usurping the right of the legislative branch to adapt the law as the people saw fit.

There is only one word for what the Court has done today: legislation. The document that the Court releases is in the form of a judicial opinion interpreting a statute, but that is deceptive… Even as understood today, the concept of discrimination because of “sex” is different from discrimination because of “sexual orientation” or “gender identity.” And in any event, our duty is to interpret statutory terms to “mean what they conveyed to reasonable people at the time they were written.”

The Court held that the equal protection clause of the 14th Amendment requires states to recognize same-sex marriages performed out of state and grant same-sex marriage licenses. The decision effectively ended public debate at the state level over the nature of marriage and the state’s interest in marriage laws.

The opinion in these cases is the furthest extension in fact—and the furthest extension one can even imagine—of the Court’s claimed power to create “liberties” that the Constitution and its Amendments neglect to mention. This practice of constitutional revision by an unelected committee of nine, always accompanied (as it is today) by extravagant praise of liberty, robs the People of the most important liberty they asserted in the Declaration of Independence and won in the Revolution of 1776: the freedom to govern themselves.

The Court ruled to strike down a law (the CPPA) prohibiting the distribution and possession of virtual child pornography that appears to — but does not — depict real children. The justification? The law was too broad and threatened the First Amendment rights of artists and producers.

The aim of ensuring the enforceability of our Nation’s child pornography laws is a compelling one. The CPPA is targeted to this aim by extending the definition of child pornography to reach computer-generated images that are virtually indistinguishable from real children engaged in sexually explicit conduct. The statute need not be read to do any more than precisely this, which is not offensive to the First Amendment.

The Court upheld a Colorado law making it illegal to approach within 100 feet of a “health care facility” (abortion clinic) and 8 feet of a person to counsel, show a sign, or pass informational pamphlets. In order to justify the decision, the Court had to re-interpret and limit drastically the First Amendment freedom of speech. The Colorado statute was found constitutional – and not a violation of the First Amendment – because it , among other things, “protected listeners from unwanted communication.”

The Court nonetheless purports to derive from our cases a principle limiting the protection the Constitution affords the speaker’s right to direct “offensive messages” at “unwilling” audiences in the public forum. Ante, at 10. There is no such principle… There is apparently no end to the distortion of our First Amendment law that the Court is willing to endure in order to sustain this restriction upon the free speech of abortion opponents.

The Court abandoned the “trimester” language and instead turned to “pre” and “post-viability” tests for constitutionality. The decision re-affirmed Roe based on stare decisis, and since “people had organized their intimate relationships and made choices that define themselves” based on the Roe ruling.

[B]y foreclosing all democratic outlet for the deep passions this issue arouses, by banishing the issue from the political forum that gives all participants, even the losers, the satisfaction of a fair hearing and an honest fight, by continuing the imposition of a rigid national rule instead of allowing for regional differences, the Court merely prolongs and intensifies the anguish.

In the same year the Court handed down Roe v. Wade, it also ruled that states may not limit abortion if it is sought for reasons of “maternal health.” The majority ruling than defined “maternal health” to include “all factors,” including physical, emotional, psychological, familial, and age considerations. Thus, they broadened the newly-conceived “right to privacy” in such a way as to completely usurp the states’ right to legislate on matters of abortion.

I find nothing in the language or history of the Constitution to support the Court’s judgments. The Court simply fashions and announces a new constitutional right for pregnant women and, with scarcely any reason or authority for its action, invests that right with sufficient substance to override most existing state abortion statutes.

The Court declared that there is a Constitutional “right to privacy” under the 14th Amendment’s “due process clause” that requires a federal abortion mandate. It thus strikes down all state laws pertaining to the regulation of abortion – except those surrounding the third trimester.

To reach its result, the Court necessarily has had to find within the scope of the 14th Amendment a right that was apparently completely unknown to the drafters of the Amendment . . . . The only conclusion possible from this history is that the drafters did not intend to have the 14th Amendment withdraw from the States the power to legislate with respect to this matter.

In 1965, the Court first “discovered” what the majority described as a “penumbral right to privacy” and ruled that counseling for contraceptives violates that right as guaranteed by the 1st, 3rd, 4th, and 9th Amendments. In the same opinion, the majority notes that the “right to privacy” is “older than the Bill of Rights.”

One of the most effective ways of diluting or expanding a constitutionally guaranteed right is to substitute for the crucial word or words of a constitutional guarantee another word or words, more or less flexible and more or less restricted in meaning. This fact is well illustrated by the use of the term ‘right of privacy’ as a comprehensive substitute for the Fourth Amendment‘s guarantee against ‘unreasonable searches and seizures.’ ‘Privacy’ is a broad, abstract and ambiguous concept which can easily be shrunken in meaning but which can also, on the other hand, easily be interpreted as a constitutional ban against many things other than searches and seizures.