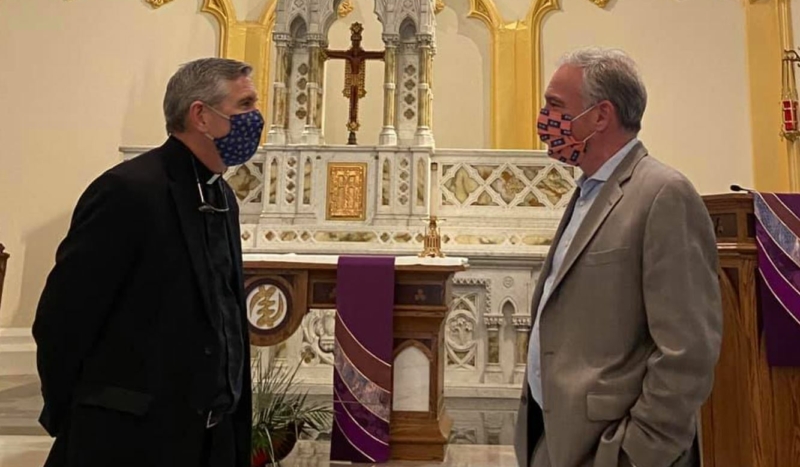 “[A] decision by U.S. bishops to elevate issues of human sexuality, however important, above all others seems contrary to the Gospel,” wrote the former Democratic vice-presidential candidate in an essay published by the National Catholic Reporter Tuesday:

No reading of the life of Jesus would suggest these issues as his primary, or even secondary, concern. His towering message is about love of neighbor as oneself with a special focus on the poor, sick, hungry, marginalized.

Kaine also argued that denying Communion to Catholic politicians over their rejection of Catholic teachings would run counter to the First Amendment to the Constitution.

“The American hierarchy should heed the words of Pope Francis and recognize Communion as an opportunity for healing rather than an occasion for judgment,” Kaine wrote:

In a civic sense, the same First Amendment that protects the rights of American Catholics to believe and worship as we choose also protects others who resolve moral questions differently based on their own faith and ethical deliberation.

“…I am most concerned by the bishops’ flirtation with redefining the meaning of the sacrament itself,” Kaine continued. All Catholics are unworthy to receive Communion, he argued, and therefore it would be inappropriate to deny prominent Catholics Communion over their public promotion of violence against the unborn.

“A decision to deny Communion to some public officials would convert a sacrament of, by and for the unworthy into an indulgence, whereby a self-elevated clergy decides who to confer with favor at the altar,” Kaine wrote, citing a line from Pope Francis: “The Eucharist … is not a prize for the perfect, but a powerful medicine and nourishment for the weak.”

The “theology of Communion begins with an acknowledgement of weakness,” Kaine wrote, and Catholic politicians like President Joe Biden “need the ‘powerful medicine’ that the sacrament provides.”

“If we believe the words we say as we receive Communion,” he concluded, “why would we transform the spiritually healing moment into yet another earthly and divisive one?”

Kaine’s essay comes in the midst of an ongoing debate about the question of pro-abortion and pro-euthanasia Catholic politicians presenting themselves for Holy Communion at Mass. The controversy has pitted a number of Catholic bishops against leaders in the Democratic Party.

This week, Archbishop Salvatore Cordileone of San Francisco issued a strongly-worded statement addressing House Speaker Nancy Pelosi, D-CA, who recently claimed she could simply use her “own judgment” when it comes to receiving Communion, angering Catholics and dismissing what her bishop called a “serious matter,”

Kaine’s position aligns with Pelosi’s against Catholic leaders like Cordileone, and will likely receive similar backlash.

According to White, Kaine argued that the “First Amendment means Catholics in public life can promote gross injustice without damaging ecclesial communion.” White summarized Kaine’s piece: “my public devotion to grave injustices is a private matter.”

“Liberal Democrats routinely question the bishops’ focus on these issues, and suggest that Catholics should give equal weight to a politician’s views on other moral issues such as racism and poverty and climate change,” Lawler wrote:

But all these issues involve judgments that responsible people can question. What is the best way to eliminate racism, to ease poverty, to protect the environment? Good Catholics give different answers to these questions, because the answers are not immediately clear. Not so with the issue of abortion. Abortion is the deliberate destruction of an innocent human life; that is a statement of scientific fact.