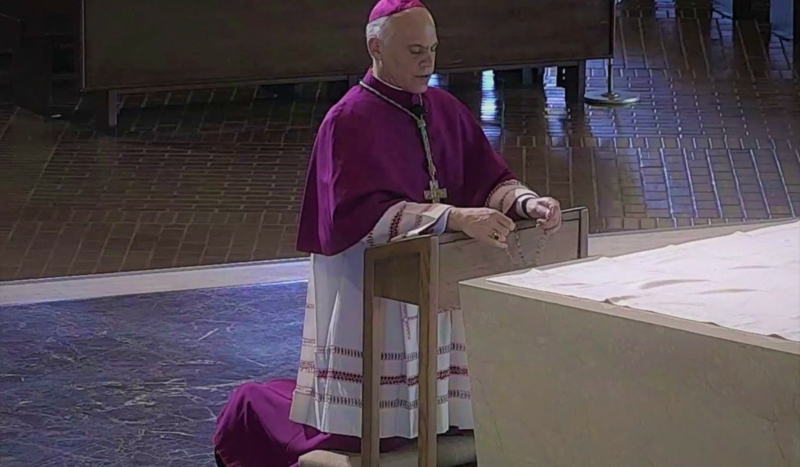 CV NEWS FEED // Archbishop Salvatore Cordileone of San Francisco confronted House Speaker Nancy Pelosi, a Catholic, over her claim that it’s entirely up to her if she wants to receive Holy Communion while maintaining her radical support for abortion.

“I think I can use my own judgment on that,” Pelosi told a reporter last week who asked about bishops calling for pro-abortion politicians to stop receiving the Eucharist. As CatholicVote reported, she also said she was “pleased” by a Vatican statement which, in part, called on U.S. bishops to tread more lightly. Pelosi described the letter as “basically” saying “don’t be divisive on the subject.”

Many Catholics saw Pelosi’s remarks as disrespectful and dismissive. “Pelosi says she’s ‘pleased’ with Vatican letter to U.S. bishops on Communion,” tweeted Bishop Donald Hying of the Diocese of Madison, WI. “So, in other words, Nancy, we bishops should just be quiet about your radical pro abortion stance, as you facilitate the continuation of the murder of millions of unborn lives.”

“Amen!” added Archbishop Samuel Aquila of Denver in response to Hying. “We will never stop defending human life in our faithfulness to the Gospel!”

In a strongly-worded statement, Archbishop Cordileone directly responded to Pelosi’s comments as well on Monday.

“We must never lose sight of this fact,” wrote Cordileone:

Cordileone went on to state that he was “happy” that Pelosi said she was “pleased” by the Vatican letter.

“In that letter, Cardinal Ladaria advises the U.S. bishops to use as a guide in discerning how to address this situation the principles laid out in a private letter in 2004 from the then-Cardinal Ratzinger, Prefect of the CDF at the time, to the bishops of the United States,” Cordileone explained.

The Ratzinger letter, for its part, “confirmed that consistently advocating for abortion and euthanasia constitutes a formal cooperation in grave sin,” Cordileone pointed out, “and that bishops must dialogue with Catholics prominent in public life who do so in order to help them understand the grave evil they are helping to perpetrate and accompany them to a change of heart.”

Ratzinger’s letter also stated that “if these dialogues prove to be fruitless, then, out of respect for the Catholic belief of what it means to receive Holy Communion, the bishop must declare that the individual is not to be admitted to Communion.”

Taking his guidance from those principles, Cordileone stated that he hopes “progress can be made in this most serious matter” with Pelosi.

The archbishop concluded his statement with a verse of Scripture:

“I have set before you life and death, the blessing and the curse. Choose life, then, that you and your descendants may live. (Dt 30:19)”