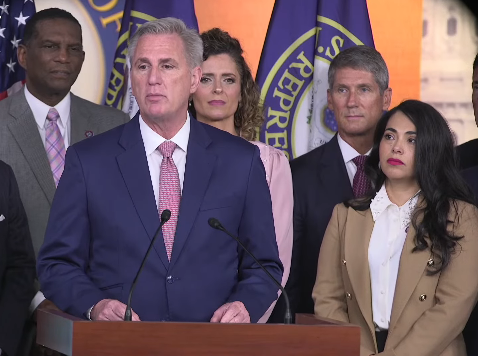 CV NEWS FEED // CatholicVote, joined by other prominent pro-life organizations, called on House Minority Leader Kevin McCarthy, R-CA, and House Minority Whip Steve Scalise, R-LA, to “prioritize policies and actions that protect women and the unborn in the wake of a post-Roe America, and reflect our shared end goal of protecting every human life from conception until natural death.”

The coalition of pro-life organizations sent a letter Tuesday to the House Republican leadership reminding them that “Congress has a significant role to play” in protecting children from the abortion industry.

In the aftermath of the Supreme Court’s ruling on Dobbs vs. Jackson Women’s Health Organization, there has been a dramatic shift in the national debate on defending the unborn, supporting mothers, and protecting families.

The letter explains that although many states have restored previous legislation outlawing abortion, others will expand their pro-abortion laws to allow for even more violence against the unborn.

“Far  from  being  only  a  state  responsibility,” the letter stated, “Congress has a significant role to play to protect the lives of the unborn. While some states will soon pass or revivify legislation and constitutional amendments that protect life, only federal law can protect unborn babies from states that will continue to allow and even subsidize abortion on demand up until birth.”

The letter highlighted that the “House of Representatives is best positioned to lead with a robust pro-life agenda beginning now and accelerating in January should [they] retake the majority.”

The signers went on to recognize House Republicans for their dedication in protecting life and defending the unborn. The coalition of pro-life groups said that they “strongly believe the following efforts would save the most lives today as we work to create policy that protects every life equally and supports a culture that makes abortion unthinkable.”

The letter described just how vital the legislation is, along with specific actions requested from the Representatives:

The Heartbeat Protection Act simply and powerfully protects the lives of unborn babies whose hearts are already beating. Only Congress can effectively disrupt, and eventually eliminate, the trafficking of chemical abortions drugs which are already the most common way to end an innocent child’s life. We encourage you to take every opportunity to highlight the dignity of human life by scheduling multiple votes on the House floor on the Heartbeat bill and others.

Signers then called upon the Representatives to seek action pertaining to government funding, writing that “the annual spending and oversight processes should reflect the value Americans place on the lives of unborn babies and their mothers and thus should fund efforts that defend life and support mothers.”

The letter continued, “to ensure this happens, the Appropriations Committee should work to bolster pro-life protections, end funding streams that support the abortion lobby, and work across committees to ensure a coordinated approach until the abortion industry becomes a dark memory of the past.”

“As pro-life leaders who have partnered with you in fighting for life,” the letter concluded, “we know these efforts will give all Americans who care about the lives of unborn babies and their mothers great confidence that the new Congress will be leading the way in defense of life.”

The article was signed by CatholicVote President Brian Burch, along with other notable pro-life organizations such as Susan B. Anthony Pro-Life America, Heritage Foundation, Family Research Council, U.S. Conference of Catholic Bishops, Students for Life Action, and many others on behalf of the millions of Americans they represent.

Readers who wish to see the full letter by the coalition of pro-life leaders to Leader McCarthy and Whip Scalise can find it here.