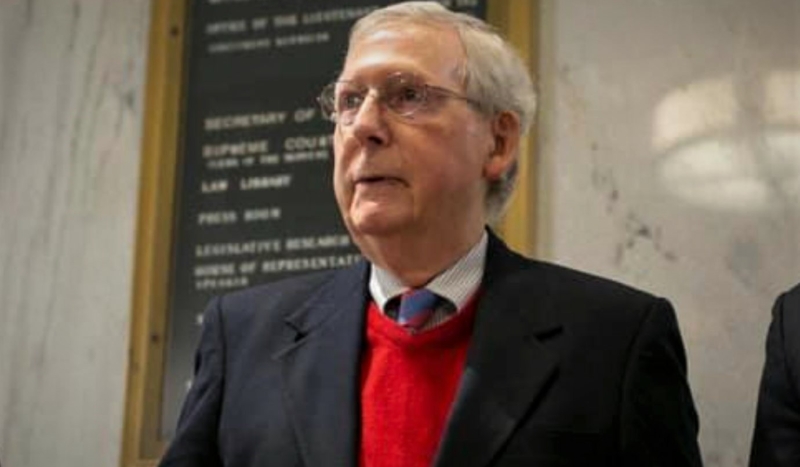 “McConnell is sharing an interview of James Carville saying Democrats ‘have to make the Republicans own that insurrection every day’ with his members as proof Democrats want to politicize the commission, a source familiar says,” reported NBC’s Leigh Ann Caldwell Thursday.

The Democrat-controlled House passed a bill to create the commission this week, over objections from a number of Republican leaders. The bill will now be taken up by the Senate, where Republicans may filibuster against it.

In the April 27 interview which McConnell is reportedly sharing with senators, Carville warned that Democrats are losing voters due to the Party’s recent move to the far left. The Party “can’t be more liberal” than moderate West Virginia Democrat Sen. Joe Manchin, Carville said. “That’s the fact. We don’t have the votes.”

After winning two seats in Georgia, Carville explained, Democrats have only a slim advantage. “But the Democrats can’t f**** it up. They have to make the Republicans own that insurrection every day. They have to pound it.”

Carville went on to argue that Republicans would “exploit” such an event if “nonwhite people stormed the Capitol” and, cynically in his view, “bludgeon the Democrats with it forever.” That, Carville said, is “exactly what the hell we need to do [to] them.”

The Democrats’ attempt to form a commission to investigate the events of January 6 is only one of a growing number of political maneuvers allegedly made necessary by the riot.

Many on both sides of the political aisle expressed concern over the number of troops deployed to the Capitol as the Biden administration took power, as well as the new security checkpoints, fencing, and surveillance efforts.

The Biden administration has faced criticism for the severity of its response to the January 6 Capitol riot. The Biden Justice Department claims it will charge over 500 people in connection with the event, many of whom were arrested in early January and have remained incarcerated since.

In addition, just this week House Democrats pushed through a nearly-$2 billion spending bill to increase security around the Capitol, citing the January 6 riot. But some Republicans noted the high costs associated with the bill.

“House Dems just passed a Capitol security bill that costs $3.5 million per member of Congress,” chided Rep. Jim Banks, R-IN, on Twitter. “Defund the Police for thee but not for me!”