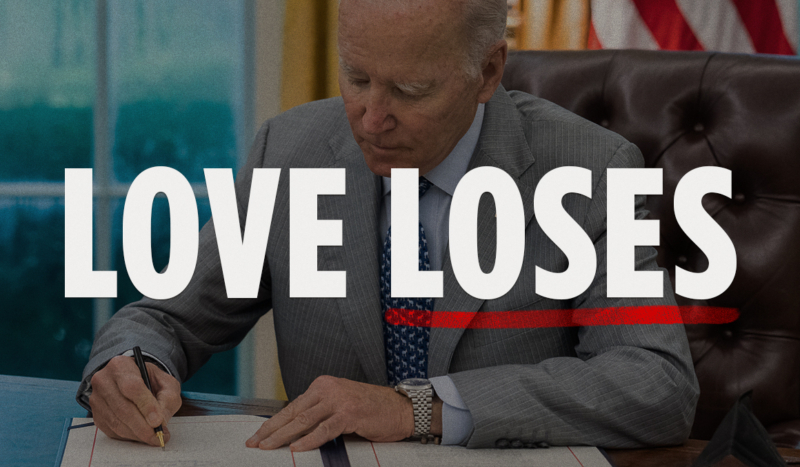 There’s a party at the White House today.

Drag queens, LGBT activists, and anti-Catholic bigots are all invited.

The signing ceremony for the (Dis)Respect for “Marriage” Act.

This marriage law was recently rushed through both the House and the Senate during the “lame duck” session of Congress — intentionally after the November elections so that public accountability would be limited.

The law did nothing to change same-sex “marriage” in the United States. Instead, the new law allows LGBT activists to unleash a new round of legal attacks on faith-based organizations and conscientious citizens who hold fast to the time-honored truth about marriage.

Catholic charities and schools will likely end up in court soon.

Business owners likewise will be shamed and sued.

This is all part of the plan.

Anyone with eyes knows the truth. Gay rights activists have duped the country for years, claiming merely the right to “marry the person they love.” Nobody would be harmed. Or so we were told.

Even some Catholics (including a few prominent priests and bishops) have fallen for the lie. Others have quietly cheered these efforts, aiming to undermine the Church from the start.

First, don’t forget who voted for this: Every Democrat in the Senate, along with 12 Republicans. In the House, 89 Catholics (74 Democrats and 15 Republicans) voted to redefine marriage and expose our religious organizations to a flood of lawsuits.

When asked to include a simple amendment that would ensure Catholics would not be targeted, these politicians ignored us.

Second, we must encourage Church leaders and Catholic business owners to hold fast. Refuse to surrender! Support the legal groups that will be called upon to defend anyone challenged under this new law. Fight for every inch.

Elections do have consequences. So do votes. Every Democrat should be challenged. And Republicans who voted for this law deserve a primary opponent.

Finally, barring an expansive decision by the Supreme Court, new legislation will eventually be needed to undo this damage.

We’re not giving up.

“Truth is not determined by a majority vote.” – Joseph Ratzinger

P.S. Left unsaid in my message above is perhaps the most grating aspect of the so-called Respect for Marriage Act – namely, that this bill will be signed into law by a man who publicly holds himself out as a “devout Catholic.” Joe Biden once ripped voters who worried that activists were aiming to change our marriage laws. Later, as vice president, he shamelessly flipped… and personally presided over a same-sex “wedding.” The outgoing “devout Catholic” Speaker of the House likewise called this bill a “glorious triumph.”

Has your pastor or bishop spoken out on this?

We’d love to hear from you.