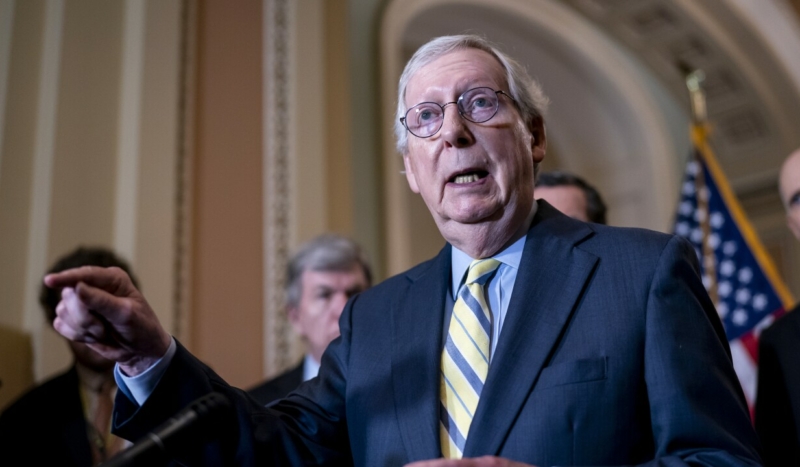 CV NEWS FEED // CatholicVote joined over 80 conservative groups in a letter to Senate Republicans July 26, urging them to oppose the so-called “Respect for Marriage Act.”

The proposed legislation “goes far beyond merely codifying same-sex marriage in federal law,” the letter reads. “It is a startling expansion of what marriage means — and who may be sued if they disagree.”

The heads of national and state organizations explained in the letter that the bill, H.R. 8404, “aims to shut down any disagreement, silencing those with the long-held conviction that marriage between one man and one woman is essential to human flourishing, a view that has existed from the dawn of time.”

“H.R. 8404 would require federal recognition of any one state’s definition of marriage without any parameters whatsoever” the letter, addressed to Senate Minority Leader Mitch McConnell, stated. “This would include plural marriages, time-bound marriages, open marriages, marriages involving a minor or relative, platonic marriages, or any other new marriage definition that a state chooses to adopt….” It continued.

Through its sweeping language and creation of new and broad enforcement mechanisms, the bill multiplies the threats against tens of millions of Americans who in “good faith” proclaim a marriage view with which the Act’s sponsors disagree, while laying the foundation for increased federal action and litigation against them.

Signers noted that the legislation was quickly passed through the House without hearings or input, and that it “is an attack on millions of Americans, particularly people of faith, who believe marriage is between one man and one woman and that legitimate distinctions exist between men and women concerning family formation that should be recognized in the law.”

The proposed legislation “threatens the freedom of numerous ‘decent and honorable’ Americans of different faiths, creeds, and walks of life who wish to live consistent with their deeply-held beliefs” signers stated.

“Despite claims from its sponsors, the so-called ‘Respect for Marriage Act’ doesn’t simply codify the Obergefell decision” said Michael P. Farris, president and CEO of Alliance Defending Freedom, and a singer of the letter to Leader McConnell. He said in a statement regarding the letter:

It forces the federal government to recognize without limit any marriage definitions that a state adopts. It also empowers the government to punish millions of Americans who hold decent and honorable beliefs about marriage—beliefs that have existed since time immemorial—exposing citizens to predatory lawsuits and even endangering the nonprofit status of faith-based organizations.

Brian Burch, President of CatholicVote, agreed. He added, “Too many Republicans we thought were our friends are caving to the pressure.”
Nearly all Democrats are guaranteed to vote yes on the legislation, with several Senate Republicans joining them as they’ve announced their support for the so-called Respect for Marriage Act. As CatholicVote previously reported:

According to CNN, five Senate Republicans will vote yes: Sen. Lisa Murkowski of Alaska (a Catholic up for re-election this year), Sen. Susan Collins of Maine (a Catholic), Sen. Rob Portman of Ohio (who is retiring), Sen. Thom Tillis of North Carolina (a Catholic), and Sen. Ron Johnson of Wisconsin (who is up for re-election). Assuming all 50 Democrats vote in favor, the bill would need five more votes for passage.

In addition, fifteen more Republican Senators are still on the fence about which way to cast their vote, including three Catholics: Sen. Mike Braun of Indiana, Sen. Mike Rounds of South Dakota, and Sen. Dan Sullivan of Alaska.

“We call on you to reject H.R. 8404 and to urge your colleagues to thoroughly abandon this harmful and unnecessary legislation” the letter stated, specifically calling on Senators who have yet to make a decision. “It has little to do with protecting rights; its text betrays an intent to stigmatize and take rights away—especially those belonging to people of faith” the letter concluded.

To view the letter sent by CatholicVote and other Conservative organizations, readers can click here.

To visit CatholicVote’s Quorum page and urge senators to reject the Respect for Marriage Act, readers can click here.