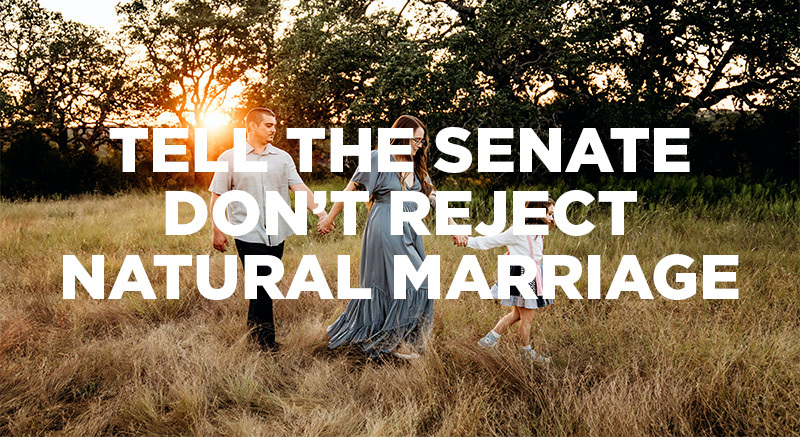 CV NEWS FEED // The showdown over the redefinition of marriage is on in the U.S. Senate, and with a number of senators wavering, CatholicVote is calling on Catholics to speak up. The group is urging supporters to write to their senators through its Quorum platform, which connects Americans to their senators and helps them send a pre-written letter or write their own.

Last week, the House passed the so-called “Respect for Marriage Act,” a bill which would enshrine “gay marriage” in federal law.

“Gay marriage” is already recognized by default after the Supreme Court redefined marriage in the 2015 ruling Obergefell vs. Hodges. But the Respect for Marriage Act would actually go further than that: the bill requires the federal government and all states to recognize any relationship considered a marriage in one state, with no limits.

This means that if one state were to legalize polygamy (in which a man marries multiple wives or a woman multiple husbands) or polyamory (the “marriage” of any number of people of either sex), all other states would be required to recognize it too. For example, California could legalize polyamory, then six men and four women could enter a polyamorous marriage in California, and then move to Texas, and Texas would be required to recognize it.

The bill contains no religious freedom protections of any kind. Since the Obergefell decision came down, there have been dozens of high-profile examples of people of faith being fired from their jobs, fined, or forced to shut down their businesses because of their sincerely held beliefs about marriage. Faith leaders worry the new bill would cause an explosion of such persecution. The bill also makes no mention of the rights of children.

The bill requires 60 votes for passage in the Senate, which is split 50-50. Almost all Democrats are considered a lock to vote yes, with the possible exception of West Virginia Sen. Joe Manchin, who has not declared his position on the bill. Manchin has opposed the so-called Equality Act, a related bill which would effectively criminalize opposition to gay marriage.

Several Senate Republicans have announced their support for the Respect for Marriage Act, with a handful of others wavering. According to CNN, five Senate Republicans will vote yes: Sen. Lisa Murkowski of Alaska (a Catholic up for re-election this year), Sen. Susan Collins of Maine (a Catholic), Sen. Rob Portman of Ohio (who is retiring), Sen. Thom Tillis of North Carolina (a Catholic), and Sen. Ron Johnson of Wisconsin (who is up for re-election). Assuming all 50 Democrats vote in favor, the bill would need five more votes for passage.

Fifteen more Republican senators told CNN they were undecided or wanted to review the bill first. This includes three Catholics: Sen. Mike Braun of Indiana, Sen. Mike Rounds of South Dakota, and Sen. Dan Sullivan of Alaska. One surprise answer came from Sen. Roy Blunt of Missouri, who leads a coalition of socially conservative senators called the Values Action Team. Blunt told a reporter he supports gay marriage but is unsure whether he will vote for the bill.

“Too many Republicans we thought were our friends are caving to the pressure,” said CatholicVote President Brian Burch. He said he was particularly irked by Sen. Thom Tillis, whom CatholicVote backed strongly and spent money to elect in his first run for the Senate in 2014. “Why should Catholics trust them when they can’t stand firm on something as fundamental as marriage?” Burch asked.

A growing group of Republican senators have announced their opposition. Sen. Marco Rubio of Florida, a Catholic, called the bill a “stupid waste of time”. Rubio also fired back at Secretary of Transportation Pete Buttigieg, who criticized Republicans for opposing the bill, saying Buttigieg “doesn’t know the difference between state & federal issues.” Sen. Steve Daines of Montana said the bill was a ploy to distract the American people from pressing economic issues like inflation and gas prices. Sen. Ted Cruz of Texas, a constitutional law scholar, said the Supreme Court was “clearly wrong” to legalize gay marriage and opposed the bill because it would take the issue out of the hands of the states if the court ever overturned it.

Republicans who vote for the bill could be doing so at their own political peril. Congressman Scott Perry voted for the bill in the House despite being the chairman of the House Freedom Caucus, a coalition of conservative congressmen. Facing backlash from caucus members, Perry is now criticizing the bill and the caucus is urging the Senate to reject it.

Many Senate Republicans are from one of the 35 states that voted to define marriage as between a man and a woman in the years before the Supreme Court took the issue away from the states. If the Court were to overrule Obergefell, the issue would return once again to the states.

“It’s time for Catholics to put the pressure on the Senate,” said Burch. To visit CatholicVote’s Quorum page and urge senators to reject the Respect for Marriage Act, readers can click here.