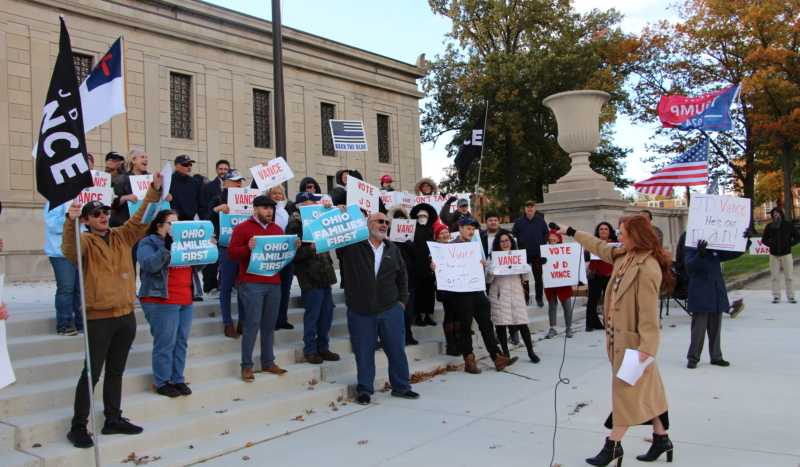 CV NEWS FEED // CatholicVote is on the road, protesting Catholic Democrats in key races across the country. A series of in-person protest events takes incumbent politicians to task for their anti-Catholic voting records and silence on ongoing violence against churches and pregnancy centers. The first two events were held last week as part of a national tour ahead of the November elections.

The group’s first stop was in Youngstown, Ohio, where a large crowd gathered outside of the debate between pro-abortion Catholic Rep. Tim Ryan and his opponent for the U.S. Senate, pro-life Catholic J.D. Vance.

CatholicVote campaign director Logan Church fired up the assembly, calling out Tim Ryan for his extreme positions on abortion, transgender boys in girls’ locker rooms, and parental rights in education.

She noted that Ryan had spent a portion of the previous debate talking about his Catholic upbringing shortly after expressing support for late-term abortion.

A pro-Ryan crowd was demonstrating on the other side of the building. At one point, they came to the CatholicVote event with their signs and walked through, attempting to antagonize the people gathered there.

On Friday, CatholicVote followed up the Ohio protest with another near Des Moines, Iowa, outside the campaign headquarters of pro-abortion Catholic Rep. Cindy Axne, who is on the ropes in Iowa’s 3rd congressional district.

Axne was holding a campaign event inside with EMILY’s List, a pro-abortion extremist group which advocates for unrestricted, taxpayer-funded abortion on demand.

CatholicVote supporters gathered outside Axne’s office with signs reading “Catholics Against Axne,” eliciting honks and waves of support from drivers passing by.

Catholic Accountability Project director Tommy Valentine called out Axne for her extreme positions and complete silence on the extensive attacks against Catholic churches and pregnancy resource centers, including one in her own district.

“Since the Supreme Court decision was leaked in the Dobbs case in early May, there have been 75 attacks against pregnancy resource centers all around the country – graffiti, windows smashed, firebombing, violent threats – including a pregnancy center right here in Des Moines,” Valentine said through a loudspeaker directed toward Axne’s office.

“What has Cindy Axne said about these attacks? Absolutely nothing,” he said with indignation.

“So now we have the Biden administration, their Department of Justice, [and] the FBI going after pro-life activists, grandmothers, and fathers… arresting them and taking them out in handcuffs. Meanwhile, we have people who are firebombing pregnancy care clinics which support women, [and those] are going uninvestigated. The FBI has done nothing about it, and Cindy Axne has said absolutely nothing about it,” Valentine said.

At one point, a man drove up and attempted to interrupt Valentine as he spoke through a loudspeaker directed at Axne’s office.

“It was the typical invective, but we weren’t intimidated,” Valentine remembered. “I just said, ‘he has a right to free speech, but so do we, so we’re going to keep going.’ Once he saw we weren’t going to stop, he drove off.”

“But the outrage is going to end real soon… because the 3rd District is going to elect Zach Nunn,” he said, referring to the pro-life Catholic and U.S. Air Force veteran who is running against Axne.

Prior to the remarks, the group had also prayed a rosary dedicated in part for Axne’s conversion.

“Cindy Axne has only a few months left [in office], so we hope she’ll do something about these pregnancy care attacks,” Valentine said, though he added, “We’re not expecting it.”

CatholicVote was joined by Maggie DeWitte of Pulse Life Advocates, formerly known as Iowans for Life.

“She and her party are radical and extreme,” she continued, noting Axne’s support for taxpayer-funded abortion.

“Abortion hurts women, and we need a leader who will represent their constituents,” she said.

CatholicVote is planning more protests against far left Catholic Democrats in the weeks leading up to election day, with stops in the works in key battleground states.

“We’re not going to stop,” Church said. “We’re going to make sure Catholic voters in these states and districts know exactly what these so-called Catholic Democrats are about.”