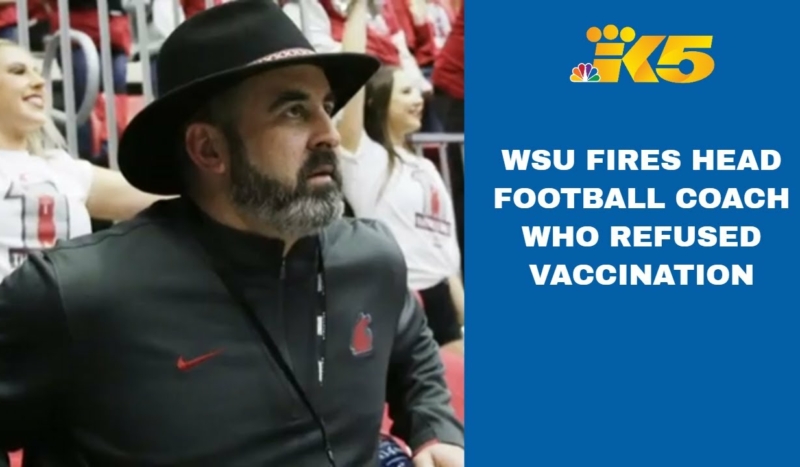 CV NEWS FEED // Washington State University Coach Nick Rolovich, a Catholic, is suing the University for illegally terminating him after he refused to take a mandatory COVID-19 shot.

The university fired Rolovich after he applied for an exemption based on his religious beliefs. The former WSU coach describes himself as a devout Catholic.

Rolovich was fired Monday, the day Gov. Jay Inslee’s, D-WA, vaccine mandate went into effect. The University did not allow Rolovich to speak with his team, and campus police escorted him to his car, the New York Post reported:

“Since at least last April, it became clear that [Washington State athletic director Pat] Chun had already determined that coach Rolovich would be fired,” Brian Fahling, Rolovich’s lawyer, wrote in a statement. “Chun’s animus towards coach Rolovich’s sincerely held religious beliefs and Chun’s dishonesty at the expense of coach Rolovich during the past year is damning and will be thoroughly detailed in litigation.”

“It is a tragic and damning commentary on our culture, and more specifically, on Chun, that Coach Rolovich has been derided, demonized and ultimately fired from his job, merely for being devout in his Catholic faith,” Fahling added, according to ESPN.

A number of commentators have dismissed cases like Rolovich’s, as well as the tragic job-loss of tens of thousands of other conscientious objectors to the vaccines in a number of industries, by citing Pope Francis’ statements in favor of receiving the jab.

As CatholicVote has reported, however, the Vatican’s highest teaching office has only made one statement on COVID-19 vaccines.

The December 2020 document analyzed the morality of using vaccines which are produced with the use of research on cells from unborn children. In keeping with longstanding moral teachings, the Vatican statement allowed for the use of such vaccines during grave circumstances such as a pandemic, but also insisted that vaccinations “must be voluntary.”

“A lot of people don’t understand that while the Vatican permits Catholics to take the vaccine, it also forbids making it mandatory,” explained CatholicVote political director Josh Mercer when asked about some of the commentary surrounding Rolovich’s firing. “Not only is Coach Rolovich within his rights to conscientiously object to the shot, but the Church backs him up on that.”