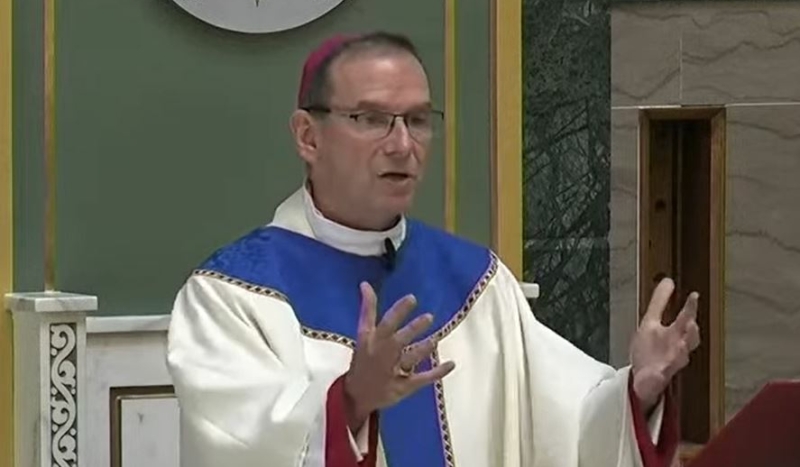 CV NEWS FEED // A prominent American bishop has publicly called on President Joe Biden to repent of his support for abortion and the scandal it has caused.

Bishop Michael Burbidge of the Diocese of Arlington, which covers Northern Virginia and borders Washington, D.C., spoke candidly about President Biden in a recent episode of his podcast, Walk Humbly.

Asked by co-host Billy Atwell, chief communications officer for the diocese, about how Catholics should understand Biden’s profession of the Catholic faith on the one hand and his advocacy for abortion without limits on the other, Burbidge first expressed concern for the state of Biden’s soul.

“I find it very troubling that President Biden continues to contradict the most basic teachings of the faith he professes,” Burbidge said:

It’s a shame. It really is, both for the state, for his own soul, and also because he’s missing the opportunity to do good in his role that is unmatched, the ability he has to do good. And it’s so sad to see him not doing that. Imagine if he chose to support women in need rather than encourage wider access to abortion.

“This is causing great scandal when he announces both his faith and his pro-abortion position publicly. I pray that he will change his position, repent of the scandal and the damage that is being caused,” Burbidge added.

The Catechism of the Catholic Church defines scandal as “an attitude or behavior which leads another to do evil,” and states: “The person who gives scandal becomes his neighbor’s tempter. He damages virtue and integrity; he may even draw his brother into spiritual death.”

The Catechism makes clear that “anyone who uses the power at his disposal in such a way that it leads others to do wrong becomes guilty of scandal and responsible for the evil that he has directly or indirectly encouraged.”

Jesus spoke directly about scandal in the Gospel when he proclaimed, “If anyone causes one of these little ones—those who believe in me—to stumble, it would be better for them to have a large millstone hung around their neck and to be drowned in the depths of the sea.”

“My prayer recently has been that, as busy as he is, as demanding as his job is, that the president and other elected officials would find time, because the door of our churches are open to everyone, to find time to just go in church, just sit in the presence of the Blessed Sacrament, be still, be quiet, and allow the voice of the Lord to speak to you,” he said:

We know what that voice will say. We know what that voice will say to the president, to all of us. Protect my children, love me, respect one another, uphold the Gospel of Life. And so, as we always say to Catholics, the churches of our doors are open to you to simply be in the presence of the Lord, the one alone who can transform hearts, the one alone in the Sacrament of Penance who is willing to forgive our sins, no matter how great they may be and allow us to begin anew.

Burbidge’s comments come as other bishops across the country have spoken clearly about self-identified Catholic politicians who support abortion in light of the likely impending reversal of Roe vs. Wade.

Last month, Archbishop Salvatore Cordileone informed Speaker of the House Nancy Pelosi, D-CA, that she is not to receive Communion in the Archdiocese of San Francisco for as long as she persists in supporting unlimited abortion. Many bishops around the country have publicly backed Cordileone’s decision.

This week, Colorado’s four bishops sent an open letter instructing Catholic state legislators who voted for a recent bill to wipe out state abortion restrictions and legalize abortion until the moment of birth not to receive Communion.