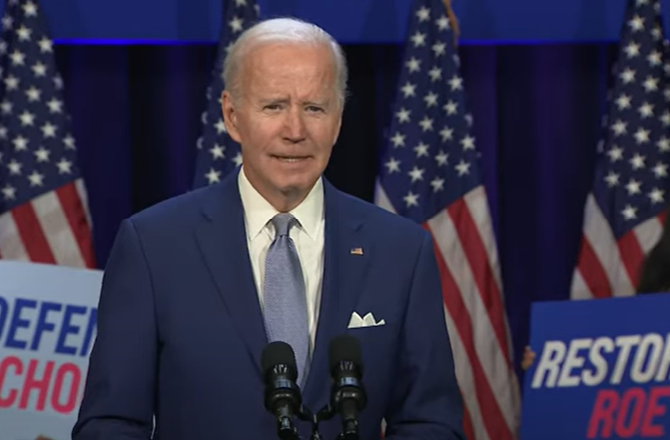 CV NEWS FEED // President Joseph Biden vowed that the first bill he will send to Congress after the midterm elections will be to “restore Roe.”

At a speech Tuesday to the Democratic National Committee in Washington, DC, the self-described “Catholic” president said his first priority with the 117th Congress will be to codify into federal law the so-called “right to abortion” for any reason up to the moment of birth.

Citing Republican efforts to pass federal limits on abortion, he warned, “the only sure way to stop these extremist laws … is for Congress to pass a law” that ensures a ‘right’ to an abortion.

Biden concluded the speech with an effort to rally the Democratic vote:

The final say [on abortion rights] does not rest in the court now, it does not rest with extremist Republicans in Congress … it rests with you… And if you do your part and vote, Democratic leaders in Congress, I promise you, will do our part, I’ll do my part.

Biden hopes to sign the bill into law on January 22, the 50th anniversary of the now-defunct 1973 Supreme Court case known as Roe v. Wade.

Catholics are appalled by the unprecedented abortion extremism pursued by the nation’s second Catholic President. While Americans struggle with record inflation, the President of the United States has nothing to offer but a pledge to expand the right to violently destroy innocent unborn children – up until birth and for any reason.

Burch also called on the Catholic bishops not to turn a blind eye to Biden’s posturing:

We need Church leaders to step up and make clear that no Catholic can support candidates or policies that would make America one of the most extreme abortion nations in the world.

Ahead of the speech, Biden’s official Twitter page reached out to his supporters with this message:

As reported by Politico, a Democratic official who previewed the remarks acknowledged that the President’s promise will be contingent on the Democrats retaining control of the House of Representatives and expanding its majority in the Senate.

Biden’s speech reflects the Democratic Party’s primary strategy to retain control of Congress: As of mid-September, Democrats had spent of $124 million in abortion-related ads. Biden has helped drive home this messaging.

At a Democratic fundraiser in September, Biden even claimed that the Catholic Church allows “exceptions” on abortion in cases of rape and incest.

Recent polling suggests that Biden’s abortion focus might not help his party retain control on Congress.
The concerns energizing voters this season are primarily economic – inflation, energy prices, and recession. And on economic issues, Republicans are leading Democratic candidates by double-digit margins.