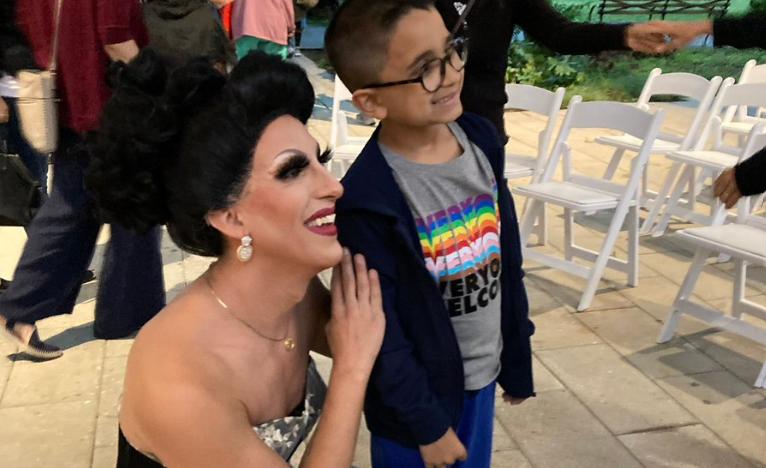 As the Daily Wire reported:

Cummings also conducts activism on behalf of the “queer youth population” in New York City, according to Out. “I also think we need young people at the table. We need new, fresh voices,” Cummings continued. “We have a lot of queer elected officials now, but we need really, really progressive queer candidates.”

In addition to radical Leftist activism, “Cummings” has regularly made a show of involving children in “Pride” events, while at the same time insisting that “Kink” (overt displays of what participants find sexually arousing) “is welcome at Pride.”

“One viral video from 2019 shows Cummings in full drag sitting cross-legged on a bar singing ‘Baby Shark’ to a 2-year-old child,” reported Mary Margaret Olohan for the Daily Signal:

“Anyone who thinks drag isn’t for children is wrong,” Cummings tweeted afterward, addressing the wide reach the video had. “Drag is expression, and children are such judgment-free beings; they don’t really care what you’re wearing, just what you’re performing.”

In 2017, “Cummings” played a role in “BOYS ON FILM 16: Possession,” one of a series of LGBTQ-themed short film collections. The movie’s promotional material billed the series salaciously as a “brooding teenager … celebrating its (not-so) sweet sixteen.”

Democratic advocates for the Respect for Marriage Act assured the public that the legislation would only “codify” and protect the legal status of “gay marriage” as prescribed in the 2015 Supreme Court decision Obergefell vs. Hodges. CatholicVote strongly opposed the bill both in the Senate and in the House, warning that it would have grave consequences affecting religious freedom, and urging Republicans to vote it down.

As CatholicVote reported after the bill’s passage in the House,

There are 130 Catholics serving in the House of Representatives, of which 74 are Democrats and 56 are Republicans. CatholicVote Communications Director Joshua Mercer noted after the vote that out of the 130 Catholics, 89 voted to redefine marriage, while only 40 Catholics voted no. (One member, Rep. Kevin Brady, a Catholic Republican from Texas, did not vote.)