Abortion Giant NARAL Pressures Bishops to Give Communion to Biden 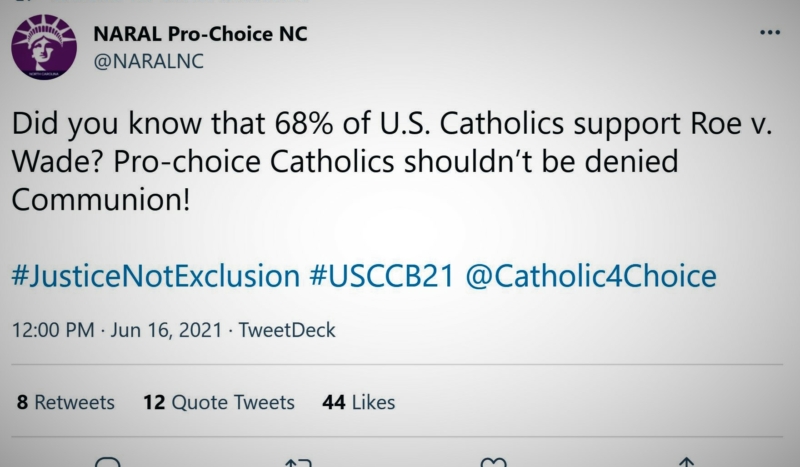 CV NEWS FEED // A chapter of the pro-abortion organization NARAL weighed in against U.S. Bishops, who are currently deliberating about issuing a statement on how to properly receive Communion.

While NARAL did not include a link to the source of their statistic, it was a reference to a Pew poll which many pro-abortion activists have been citing in response to a newer poll which CatholicVote released this week.

The CatholicVote poll found that 83% of churchgoing Catholics believe politicians who oppose Catholic teachings “create confusion and disunity,” while 74% believe that such Catholic politicians should not present themselves to receive Communion.

The disparity between the new poll and the previous Pew poll of Catholics came down to one major factor: the latest poll only surveyed Catholics who attend Mass at least weekly, or once a month.

Some commentators have argued that other polls of Catholics, especially those conducted by secular organizations, tend to survey anyone in the general public who chooses to identify as Catholic, which inevitably includes non-churchgoers with no skin in the game.

As Tim Graham of the Media Research Center put it this week, “‘MSM’ pollsters prefer to cobble together a majority of Catholics by using the ones that don’t go to church. It’s like polling people about election choices who never vote.”

CatholicVote President Brian Burch pointed out when this week’s poll was released, the Catholic respondents were by no means a cherry-picked or partisan few. In fact, the same respondents who believed politicians like Biden should not receive Communion also gave the president a 56% approval rating — in line with many other national polls.

Another factor is that the Catholic Church has clear teachings about the importance of approaching the Eucharist in good conscience, as well as teachings about the gravity of the evil of abortion. Those are the doctrines which Archbishop Jose Gomez, president of the USCCB, hopes to clarify in a document after this week’s assembly. The document would likely be released after several months of drafting, perhaps in November.

The publication of such a document would have significant political implications for President Joe Biden and his supporters. Biden’s spokespeople have regularly referred to him as a “devout” Catholic, and he prides himself on regularly attending Mass. But Biden remains in favor of policies that promote the abortion industry, including taxpayer funding for abortions through all nine months of pregnancy.

Democratic efforts to retain American Catholics as a voting bloc are faced with a steep challenge in the current debate. And the intervention of overtly pro-abortion secular organizations like NARAL will only up the stakes.

On social media, a number of Catholics — including some known to be left-leaning on many issues — objected to NARAL’s tweet demanding Communion for pro-abortion politicians.

“‘Everyone else is doing it’ isn’t the fool proof argument you think it is,” chided podcaster Anna Mae.

“Abortion giant NARAL now weighing in on Communion discussion,” tweeted CatholicVote. “This further cements the need for exactly what the bishops are doing. Pray for our shepherds.”