Zelenskyy Speech to Congress: Lawmakers and Others React 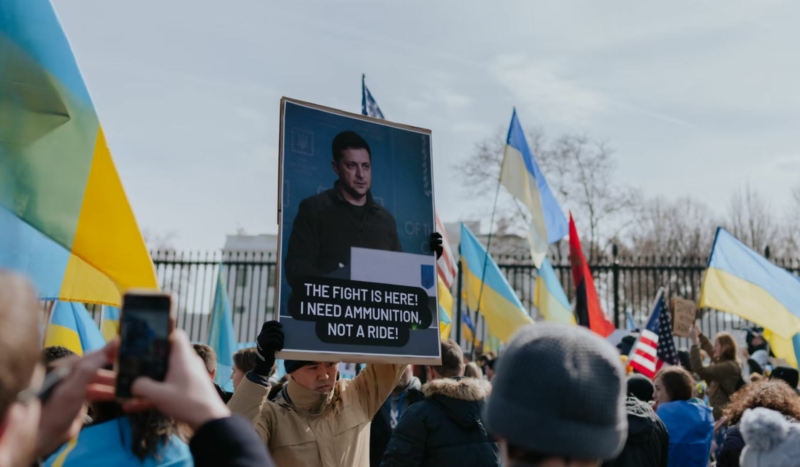 CV NEWS FEED // President Volodymyr Zelenskyy of Ukraine addressed the U.S. Congress Wednesday via video conference, appealing for more aggressive efforts to aid his country against Russia’s invasion. Lawmakers are now debating the merits of Zelenskyy’s requests, while commentators, including Catholic activists and thinkers, weigh in.

Zelenskyy’s address included a video showing the devastation the war is wreaking in Ukraine, which numerous Members of Congress said was deeply moving.

“In the address, Zelenskyy appealed to Americans’ emotions, invoking events including 9/11, Pearl Harbor, and Dr. Martin Luther King Jr.’s ‘I Have a Dream’ speech,” Fox News reported. “He asked the U.S. to enforce a no-fly zone over Ukraine … or alternatively to provide Ukraine with fighter jets and anti-aircraft weapons.”

Zelenskyy also appealed directly to President Joe Biden to lead American policymakers and other Western states in helping Ukraine confront Russia. “I’m addressing President Biden,” said Zelenskyy. “You, the leader of your nation. I wish you to be the leader of the world.”

“Members of Congress effusively praised Zelenskyy and his speech – even if its potential policy implications were not immediately clear,” according to Fox:

Peter Wolfgang, a Catholic commentator and President of the Family Institute of Connecticut, however, sounded the alarm over the implications of what Zelenskyy requested.

The Ukrainian president’s speech was “masterful,” Wolfgang acknowledged, and his “people have suffered greatly.” But in response to Zelenskyy’s plea “Is that a lot to ask for, a no-fly zone?” Wolfgang said: “The answer is yes, it is. And no, we should not give it to you.”

While Wolfgang said he does not blame Zelenskyy for asking, “I am astonished that policymakers, and those who influence them, discuss the request as if it were a serious option.”

“There is something about thirty years of post-Cold War peace that seems to have rotted the brains of our foreign policy elites,” Wolfgang said:

We got used to a unipolar world. Calling the shots, throwing our weight around, doing whatever we want. We forgot what it was like to live in a world of restraints. A world with peer competitors who could counter us. But we used to know how to navigate that world. It’s how we won the Cold War without it ever going hot. It’s how we got these last thirty years of peace between the Great Powers.

NATO accomplished its mission for 40 years “without ever having a direct military confrontation with Russia,” Wolfgang explained. “Had we failed, it would have been World War III.”

Wolfgang referenced the Cuban Missile Crisis and other moments of “high tension” during the Cold War, “moments when one false move, one simple error, could cause two superpowers with thousands of nuclear missiles to launch an attack.”

Russia may no longer be as powerful as it once was, but it is “still the world’s other nuclear power,” Wolfgang warned. “Which is why a no-fly zone is insane. To enforce it, NATO would have to shoot down Russian jets. It would bring us into direct military conflict with Russia, the very thing we successfully avoided for forty years during the Cold War.”

Avoiding such confrontations is the “reason the world is still here,” Wolfgang pointed out. “The U.S. would be ‘helping to keep the planet alive’ through a no-fly zone, Zelenskyy claimed. No, Mr. Zelenskyy. A no-fly zone would accomplish the very opposite. It would destroy the world as we have known it.”

“I’m with Ukraine. I’m with Zelenskyy,” Wolfgang added. “Zelenskyy is right that Russia has attacked basic human values” and “I support everything we have done to help Ukraine so far.” Nonetheless, Wolfgang argued, there are available solutions in Ukraine which could deescalate the tensions and bring us back from the “precipice” in the long run.

Jason Jones, a Catholic activist and writer, highlighted the need to remember the humanity of the Ukrainian people in the midst of this conflict. His organization, the Vulnerable People Project, is active on the ground in Ukraine, where his team have sustained serious injuries traveling through Russian fire to bring food to civilians and evacuate women and children to Poland.

“The people of Ukraine are stuck between NATO and Russia, and neither has the best interests of Ukrainian people in mind,” Jones told CatholicVote on Wednesday. “As Catholics, we should remember that the Ukrainian people are an end in themselves, and not a means to an end.”

Jones suspects that much of the rhetoric surrounding the war, including both escalatory remarks by American politicians such as Lindsay Graham (who has publicly called for Russian leader Vladimir Putin’s assassination) and Russian talking points claiming there was no injustice in the invasion, is just non-Ukrainian powers trying to use the country for their own benefit.

“It’s striking to me that American politicians like Joe Biden and Mitt Romney are so callous to the plight of the Ukrainian people,” Jones said. Romney recently drew criticism after he accused former Congresswoman Tulsi Gabbard of “treason” for advocating deescalation from a full-scale Western confrontation of Russia.

“Ultimately, Romney and Graham and Putin agree on one thing: That they can use Ukraine to push their national interests,” said Jones. “They’ll fight to the last Ukrainian to advance their states’ interests.”