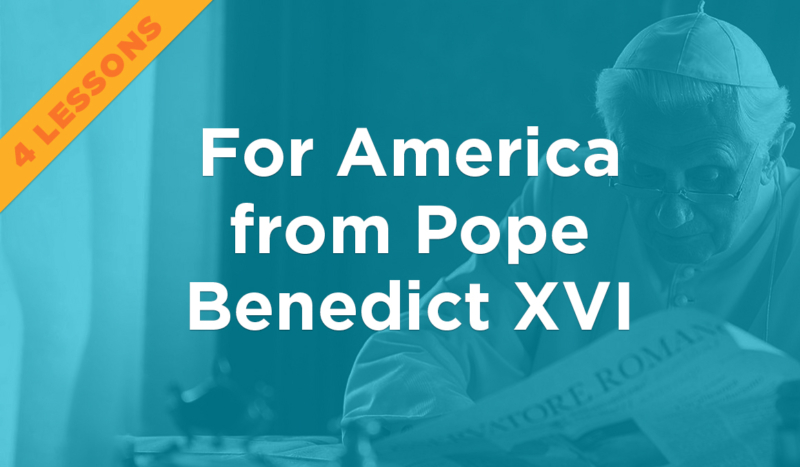 Four Lessons for the USA

As head of the universal Church, Benedict XVI served Catholics from every continent and nation, language and culture. Americans make up a mere 7% of all Catholics worldwide and should hardly expect to receive much more than that proportion of the pope’s attention.

Nevertheless, several lessons from his long life stand out as particularly challenging to American Catholics in the 21st century. These themes are a summons to persevere in recalling our great nation – and ourselves – to live God’s “caritas in veritate,” charity in truth.

“If an individual is to accept himself, someone must say to him: ‘IT IS GOOD THAT YOU EXIST’ – must say it, not with words, but with that act of the entire being that we call love.”

Americans sit atop the world financially, militarily, and materially, but so often we are tempted to equate our worth with our wealth. Pope Benedict XVI continued the mission of Pope St. John Paul II, again and again emphasizing that God is love. We exist because He loved us into existence.

We have infinite value not because of what we have or what we do… but because of who we are. The only appropriate response to that reality is to love one another as God has loved us – with our whole being.

2. The Duties of Catholics in Public Life

While head of the Congregation for the Doctrine of the Faith, Ratiznger penned the ponderously titled “DOCTRINAL NOTE on some questions regarding The Participation of Catholics in Political Life” (2002).

In it, he praised democratic governments for encouraging citizens to actively participate in their own governance. But he warned:

The Church recognizes that while democracy is the best expression of the direct participation of citizens in political choices, it succeeds only to the extent that it is based on a correct understanding of the human person.

Catholics serving in public life can only serve their country if they promote concrete measures to preserve and promote the dignity of every child of God. When they fail to do so, they separate themselves from the Body of Christ.

In a May 2007 interview, during a flight from Mexico City to Brazil, Benedict explained that politicians who had voted in support of abortion had excommunicated themselves. Therefore, they should not participate in Holy Communion during Mass: “Legislative action in favor of abortion is incompatible with participation in the Eucharist.”

In America, Catholics have risen to prominent political office in the last 60 years – and with that honor comes the grave responsibility to bring the truth and love of God to the public square.

3. The Limits of State Authority

In Caritas in Veritate (2005), Benedict addressed the pressing issues of justice and the common good in a globalized society. As a leader, America faces the temptation to assist massive efforts to “re-set” the world order and decimate small social institutions in the name of “global equity.”

Instead, we should take our cue from his words: “The articulation of political authority at the local, national and international levels is one of the best ways of giving direction to the process of economic globalization. It is also the way to ensure that it does not actually undermine the foundations of democracy.” (Caritas in Veritate, no. 41)

The common good “is the good of ‘all of us,’ made up of individuals, families and intermediate groups who together constitute society.” (Caritas in Veritate, no. 34)

Government exists not to swell itself up and obliterate families, churches, and small societies, but to create a “zone of freedom” in which they can provide for the real needs of their neighbors.

The state executes justice, but small societies can provide both justice and love without which the human person will perish.

Benedict XVI presided over a persecuted Church. In China, Africa, the Middle East, and Central America, thousands of Catholics were martyred, imprisoned, or exiled for their faith during his reign. He was keenly aware of the need for bastions of religious freedom – and that America is at a crossroads. Will it remain a refuge for religious liberty and a sanctuary for Christians? Or will it abandon its founding and fall into the slow, secular decline of Europe?

In Caritas in Veritate, Benedict reminded us that religious freedom is not free, but it is worth sacrificing everything to preserve.

The Christian religion and other religions can offer their contribution to development only if God has a place in the public realm, specifically in regard to its cultural, social, economic, and particularly its political dimensions.

Caritas in Veritate, no. 56

At the same time, he corrected the false notion to which many Americans – including Catholics – have fallen prey. Religious liberty cannot be reduced to “freedom to worship in your church” or even “all religions are the same.”

Religious freedom does not mean religious indifferentism, nor does it imply that all religions are equal. Discernment is needed regarding the contribution of cultures and religions, especially on the part of those who wield political power, if the social community is to be built up in a spirit of respect for the common good. Such discernment has to be based on the criterion of charity and truth.

Caritas in Veritate, no. 55

Catholicism holds the key to true freedom for all nations and religions, but it will only be able to contribute its gift if the public square remains free:

“The whole man and all men” is also the criterion for evaluating cultures and religions. Christianity, the religion of the “God who has a human face”, contains this very criterion within itself.

Caritas in Veritate, no. 55

In his eight short years as pope, Benedict XVI anchored the post-Vatican II Catholic Church firmly in the faith of Jesus Christ. May we as American Catholics never forget the urgent message God gave us through his servant.