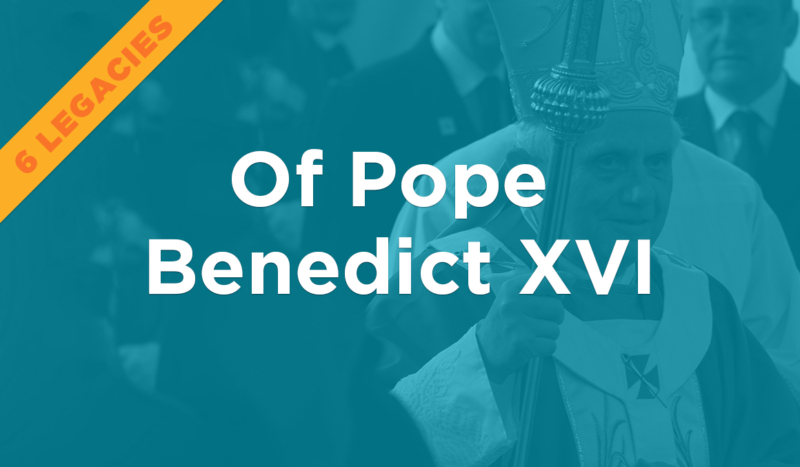 In his eight short years as pope, Benedict XVI anchored the post-Vatican II Catholic Church firmly in the faith of Jesus Christ and gave its faithful the blessings of his own keen intellect and profound charity.

Here are the six greatest gifts Benedict – the first pope elected in the twenty-first century – gave to the Church and the world.

The important thing to see is that God exists… if he’s omitted, everything else might be as clever as can be and yet man then loses his dignity and authentic humanity.

It seems too simplistic, but Benedict reminded the world that God must be the center of the human political project. And by the time he ascended the throne of St. Peter, it was a lesson most of the West had utterly forgotten.

Benedict’s insight – which he shared with his predecessor Pope St. John Paul II – into the post-modern mind was that, while vestiges of Christian sentiments still permeated Western culture, for all intents and purposes modern man acts and thinks as if God does not exist.

He understood that, once society embraces this kind of “practical atheism,” there are no restrictions on human atrocities as man loses his sense of transcendent purpose and worth.

But if the West could remember God, that same knowledge could transform human communities by ordering them to mankind’s true end with faith, hope, and love.

Freeing Us from the “Dictatorship of Relativism”

In his opening address at the 2005 papal conclave, which would elect him pope, Joseph Cardinal Ratiznger declared:

“Relativism, which is letting oneself be tossed and “swept along by every wind of teaching,” looks like the only attitude (acceptable) to today’s standards. We are moving toward a dictatorship of relativism which does not recognize anything as for certain and which has as its highest goal one’s own ego and one’s own desires.”

Benedict articulated – perhaps better than any living person at the time – the central crisis of modernity: the loss of confidence in the truth.

Truth, he said, is not the enemy of freedom. It is the necessary precondition of freedom.

Authentic freedom is always related to the truth.

Directly tied to its forgetting of God, secular modernity embraces relativism as its path to happiness. We hear everywhere, “That’s your truth. It’s not my truth. How I feel is what’s true for me.” Perhaps nowhere is this crisis more evident than in the trans ideologies, which completely untether a person from his physical body and his family in the name of freedom and “happiness.”

But this, Benedict warned, is a kind of abject slavery that leads to misery. The only path to freedom and happiness is to pursue the truth – found in its fullness in Jesus Christ – regardless of how we feel or what the latest fashion is. Being a free and flourishing human adult, he said, means having wisdom and faith in the Truth as given to us by God.

In 2006, Benedict gave a scholarly presentation on faith and reason at the University of Regensburg in Germany. One sentence in his remarks sparked international debate among many who had not obviously read the speech itself.

In the lecture, Benedict quoted an obscure 14th-century Byzantine text that read: “Show me just what Muhammad brought that was new and there you will find things only evil and inhuman, such as his command to spread by the sword the faith he preached.”

The global reaction missed the message.

The mainstream media highlighted crowds of screaming Muslim men burning effigies of the pope. In Palestine, churches were burned, and an elderly nun was assassinated in Somalia. Western commentary largely blamed Benedict for imprudence at best and Islamophobia at worst.

Benedict expressed regret that his choice to use the quote stirred such a fierce reaction among some Muslims, but he did not, as the late Father Richard John Neuhaus wrote, retract his fundamental point. The modern “divorce of reason from religion and morality leaves the intellectual defenders of the West incapable of explaining why, for instance, one should rationally prefer a religion of reasonable persuasion to a religion of violence.”

The “Regensburg Moment” drew a line in the sand at the start of his papacy: Pope Benedict XVI issued tough challenges – that no other world leader was willing to make – to both modernity’s rationalism and Islam’s internal wars over religious toleration.

The Hermeneutic of Continuity

As a young bishop, the future Benedict XVI was present at and helped shape the documents of the Second Vatican Council as a theological advisor. His experience at the council sessions also changed him.

In the early days of the Council, then-Joseph Ratzinger helped draft several addresses for pro-modernizer Cardinal Frings of Cologne. He later reflected that at the time he was convinced that the Church “had to face the situation of the present in a new language.”

But at the end of the Council, Ratzinger returned to Tubingen University – the German bastion of liberal theology – where he witnessed firsthand the student revolutions of 1968. He saw leftist theologians co-opting the work of the Council… and ultimately the teaching of the Church.

For the rest of his life, therefore, he promulgated what he called “hermeneutic of continuity,” the proper interpretation of Vatican II. As opposed to the rampant and erroneous “hermeneutic of rupture,” which claimed that the Council broke with the Church’s traditions, Benedict’s interpretation saw it as a reform designed to strengthen and enrich the unchanging Catholic teaching.

Benedict XVI encouraged Catholics to study and embrace Vatican II as a magisterial testimony to “the reality of an unbroken community of faith in Jesus Christ… We must rediscover that luminous trail that is the history of the saints and of the beautiful—a history in which the joy of the Gospel has been irrefutably expressed throughout the centuries.”

Restoring the Sacred to the Liturgy

Closely linked to that hermeneutic of continuity was Benedict’s deep respect for the historic liturgical rites of the Church. In his 2000 The Spirit of the Liturgy, then-Joseph Ratzinger wrote: “Real liturgy implies that God responds and reveals how we can worship him… It cannot spring from imagination, our own creativity – then it would remain just a cry in the dark or mere self-affirmation.”

After observing the post-Vatican II liturgical chaos in the Latin rite, Benedict warned that a sense of the transcendent at the Mass had “faded from the public consciousness of the West.” He sought ways to restore a sense of the sacred to the Mass – by promoting the re-discovery and respect for the diversity of rites in the Church.

Deeply convinced that the different rites enrich one another, he made headlines in 2007 with his motu proprio Summorum Pontificum, which honored and restored the use of the 1962 Roman Missal (or “Latin Mass”).

In 2009, he promulgated Anglicanorum Coetibus, welcoming members of the Anglican Church who wished to reunite with Rome. Instead of requiring them to use the rites of the Novus Ordo Mass, he specifically allowed these converts the full use of traditional Anglican rites, “so as to maintain the liturgical, spiritual and pastoral traditions of the Anglican Communion within the Catholic Church, as a precious gift nourishing the faith of the members of the Ordinariate and as a treasure to be shared.”

The Encyclicals: A Trilogy of Joy

Benedict has been called a “prophet of doom” and “God’s Rottweiler.” But for those who know him through his writing, the overwhelming impression of him is one of joy.

Benedict possessed an enduring confidence that the light has overcome all darkness. And his legacy of joy is most completely showcased in his triumvirate of papal encyclicals, released between 2005 and 2009.

Centered on the three theological virtues, these documents are Benedict’s tour de force and labor of love for the faithful. His writing is straightforward and, while intellectually rigorous, clear and accessible. At the conclusion of Deus Caritas Est, he writes:

Love is the light—and in the end, the only light—that can always illuminate a world grown dim and give us the courage needed to keep living and working. Love is possible, and we are able to practice it because we are created in the image of God. To experience love and in this way to cause the light of God to enter into the world—this is the invitation I would like to extend…

That is his legacy.

That is the invitation God extended to us all through his life.