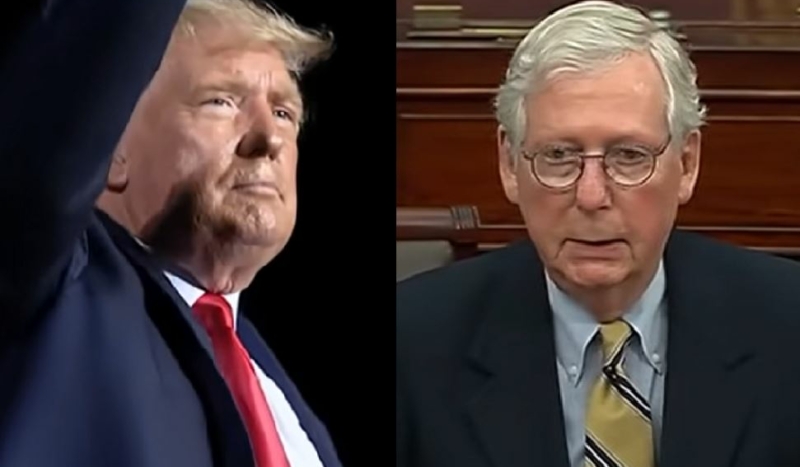 At a donor event over the weekend, Trump called McConnell a “loser” and a “dumb son-of-a-b****,” decrying the top Senate Republican for too-readily accepting the results of the 2020 election.

In a later statement Monday evening, Trump doubled down, arguing that with “leaders like Mitch McConnell,” Republicans and moderate Democrats “are helpless to fight” against Supreme Court packing at the behest of the radical Left. “He didn’t fight for the Presidency, and he won’t fight for the Court.”

Some Republicans in the Senate worry that Trump’s harsh words for McConnell could splinter the Party, weakening GOP chances of much-needed victories in midterm elections next year.

“We’ve got issues as a party, with the demographic trends going against us, and we don’t have a lot of margin for error,” said Sen. Mike Braun, R-IN, according to Politico. “When it comes to the infighting politically, I don’t know how that can help — when you’re scrapping on the margins, when you’re trying to win states, and especially national elections.”

Senate Minority Whip John Thune told Politico that he hoped for a “truce.” “It’s in everybody’s best interest — including the former president, if he wants to continue to stay viable politically — to help us win the majority in 2022.” A few other GOP senators expressed similar sentiments in comments to Politico.

McConnell has declined to comment on Trump’s latest jabs.

Sen. Rick Scott, R-FL, presented Trump with a new award on behalf of the National Republican Senatorial Committee over the weekend, a move which many saw as an effort to smooth things over between the Senate GOP and Trump–who will have considerable influence over the outcomes of the 2022 midterms.

Scott is the chair of the Senate GOP’s campaign arm, and has vowed to support GOP incumbents in 2022, including those whom Trump has pledged to oppose.

“President Trump fought for American workers, secured the border, and protected our constitutional rights,” said Scott regarding the new “Champion for Freedom” award.

Despite the ruckus between Trump and McConnell, Scott maintains that all is well in the GOP, and that the Party will fight as one next year against the true political opponents: Democrats.

Pressed for comments on Trump’s antagonism toward McConnell, Scott has been breezy and conciliatory, projecting the good nature and unity which many Republicans hope will settle in soon at the Senate.