Trump Did Not Order Protesters Driven From Park in 2020, Report Finds 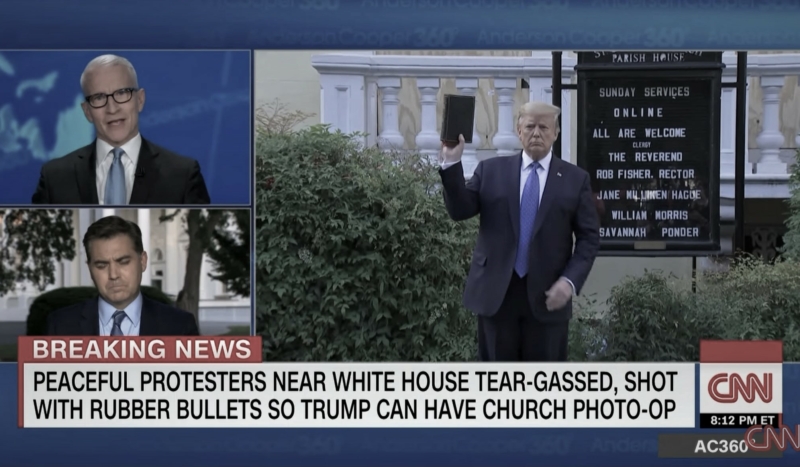 Trump went to the church on foot in what seemed to be a spontaneous gesture of solidarity with American Christians alarmed by ongoing violent BLM protests. St. John’s had been set ablaze the night before.

Once there, Trump held a copy of the Holy Bible aloft and decried the “destruction of innocent life, and the spilling of innocent blood,” calling it “an offense to humanity and a crime against God.”

Many media outlets downplayed Trump’s appeal to law and order and referred to his visit to St. John’s Church dismissively as a cynical stunt. More significantly, they also spread what the Interior Department now has revealed to be a falsehood: that Trump had peaceful protesters driven out of the premises to make way for a “photo-op.”

“Interior Dept. IG report says police cleared protesters from D.C.’s Lafayette Park over fencing installation, not for Trump photo op,” Meet the Press reported Wednesday. NBC’s Ken Dilanian said of the falsehood: “a narrative we thought we knew is not the reality.”

“[T]he evidence established that relevant USPP officials had made those decisions and had begun implementing the operational plan several hours before they knew of a potential Presidential visit to the park, which occurred later that day,” Interior Department Inspector General Mark Greenblatt wrote in a statement with the report’s release Wednesday. “As such, we determined that the evidence did not support a finding that the USPP cleared the park on June 1, 2020, so that then President Trump could enter the park.”

“Police in Washington, D.C. used tear gas and rubber bullets on peaceful protesters to clear them away from St. John’s church, which suffered a small fire Sunday night, near the White House,” NPR reported on June 1, 2020. “President Trump then walked to the church for a photo op.”

At the time, then-presidential candidate Joe Biden spread the false report as well. Starting that day, Biden also directly used the false information in his campaign to “defeat” Trump in the 2020 election.

“He’s using the American military against the American people. He tear-gassed peaceful protesters and fired rubber bullets. For a photo,” Biden tweeted. “For our children, for the very soul of our country, we must defeat him. But I mean it when I say this: we can only do it together.”

The following day, Archbishop Wilton Gregory of the Archdiocese of Washington, DC weighed in as well, decrying “the use of tear gas and other deterrents to silence, scatter or intimidate [human beings] for a photo opportunity in front of a place of worship and peace.”