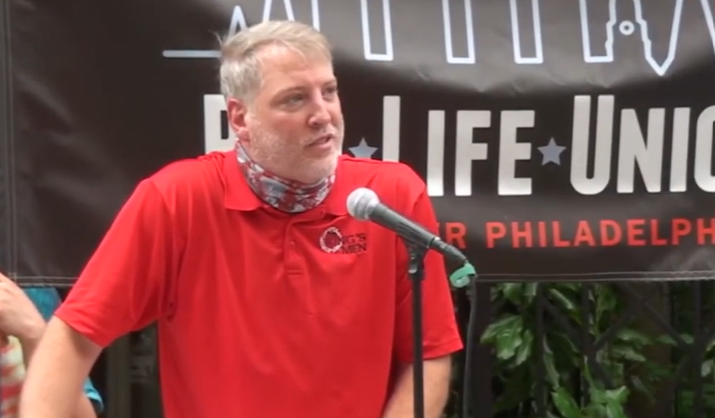 EDITOR’S NOTE: A previous version of this article incorrectly attributed quotations to Fr. Jeff Kegley of Saint Mary, Mother of God Church in Middletown, NJ. Fr. Kegley was not the author of those quotations; they were from a message he received from a friend of his and posted on social media. CatholicVote regrets the error.

CV NEWS FEED // An armed SWAT team entered the home of Catholic pro-life leader Mark Houck in the early hours of Friday morning, arresting him in front of his wife and children.

According to a later report from the Daily Beast, a Philadelphia Federal Court filing shows Houck is now facing felony charges for allegedly pushing a “patient escort” outside of an abortion clinic nearly a year ago, in October 2021.

Houck is well-known and well-liked in Catholic and pro-life circles. On Friday, a number of reputable public figures spoke out against the arrest and asked their followers to pray for Houck.

“Prayers requested for Mark Houck, pro-life/anti-porn speaker/activist, devout Catholic, father of 7, founder of The Kings Men for sanctity of Catholic men, who has been arrested by a SWAT team,” tweeted Sister Mary Joseph of the Most Sacred Heart of Jesus. “This is the USA, my friends, & our rights are being trampled!”

“Today a SWAT team broke down his door and put a gun in his face in front of his wife and kids for ‘restricting access’ to an abortion clinic,” Stefanick continued. “Which he never did. Total, blatant, false charge against a man who poses no threat to justify a SWAT team.”

He and his wife Ryan-Marie homeschool and are involved in the JMJ Homeschool Group. Additionally, Mark co-founded and runs The King’s Men apostolate which helps form men into Leaders, Protectors, and Providers (https://thekingsmen.org/). Mark is the kinda guy who not only talks the talk but, walks the walk as well. Every single week he goes to pray at the Appletree Planned Parenthood abortion center in Philly. He routinely reaches out to those who would seek abortions, their husbands/boyfriends, and even the doctor who performs them with great charity and compassion. In fact, he and I have discussed this on a number of occasions on my radio show, “Catholic Drive Time.”

McClane said Houck’s wife texted him Friday morning to tell him that “20 SWAT team members broke into their house and arrested Mark at gunpoint in front of his wife and children for his pro-life work.” The incident took place just after 7am, according to Houck’s wife. “He was indicted as violating the Freedom of Access to an abortion clinic and supposed attack on an abortion escort volunteer,” McClane said.

“This probably is connected with a case of an escort who provoked Mark at the Appletree abortion center,” according to an email from Fr. James Hutchins, who serves as the chaplain of Houck’s organization The King’s Men:

After five appearances in Phila. court about this and without the accuser (who deliberately made himself absent,) the court dismissed the case. …The escort apparently is not giving up and probably has some connection with pro-abortion politicians or law officers. …This is the unbelievable evil that we are dealing with!