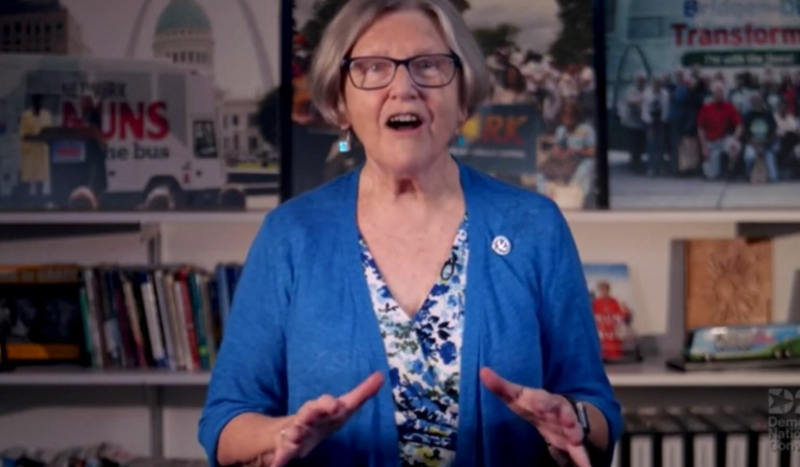 CV NEWS FEED // A glowing writeup of the life and work of Sr. Simone Campbell tells the story of a woman committed to thwarting pro-life politicians, bishops, and even the Vatican.

The National Catholic Reporter’s Dan Stockman wrote a profile on Campbell after the 75-year-old nun announced she will be stepping down from her role as head of her left-wing activist organization Network.

Campbell expresses pride in the fact that the Vatican repeatedly focused on her and her organization for its opposition to the interests of the Church.

By 2004, “Rome” believed Network “focused too much on social justice and not enough on abortion and gay marriage,” wrote Stockman. “‘We often joked that we should send the Vatican a thank-you note,’ said Campbell….”

The negative attention from the Vatican “led to national media attention, and Campbell gave interviews on television shows, spoke at the 2012 Democratic National Convention and said a prayer at the 2020 convention.”

“The Vatican named [Network] as being a bad influence,” said Campbell, “but that’s how we got the bus.”

Campbell was referring to a 2012 intervention by Benedict XVI’s Vatican, which she used as a publicity campaign to launch her “Nuns on the Bus” tours. The tours played a role in promoting Democratic legislation and candidates. Joe Biden once joined Campbell at her bus, and the secular media widely feted her tours.

“There were appearances on ‘The Colbert Report,’ ‘The Daily Show with Jon Stewart’ and ‘60 Minutes,’ and interviews in The New York Times, The Washington Post and Rolling Stone magazine,” wrote Stockman. “The bus was also a fundraising boon: Running on fumes before the Vatican announcement, Network raised $150,000 in 10 days following the announcement of the bus trip, Rolling Stone reported.”

“It was a gift of the Spirit,” chided Campbell in reference to the Vatican’s effort to reform her group.

The Church’s 2012 attempt to rein her in came after she succeeded, according to then-President Barack Obama, in supplying the “tipping point” for the passage of the pro-abortion Affordable Care Act.

The pro-Obamacare public messaging of Campbell and her nuns gave voters the impression that the legislation would be pro-life. As Stockman wrote, their “endorsement gave pro-life representatives in the House the reassurance and political cover they would need” to support Obama’s health policy, despite dire warnings from America’s bishops.

“The media pounced on the differing stances between sisters and bishops, and Campbell did 33 interviews in five days,” Stockman explained, “including one on Fox News in which she explained the sisters weren’t choosing between health care reform and protecting the unborn because the bill did both.”

Within months, the whole nation would learn that Obamacare was one of the greatest victories for the abortion industry since Roe vs. Wade, and the Little Sisters of the Poor would begin their decade-long battle against enforcers of the bill’s mandate that religious organizations must pay for employees’ contraceptive and abortion-inducing drugs.

Campbell will be leaving her leadership role at Network now that Biden has taken office.

She says she first told her board of directors she might leave in 2016, “thinking that if Hillary Clinton had been elected, I would have stepped down in 2018 and let the new executive director get ready for the 2020 election.”

“But when Donald Trump got elected,” Campbell said, “I just couldn’t do it. It was too important to stay and fight.”