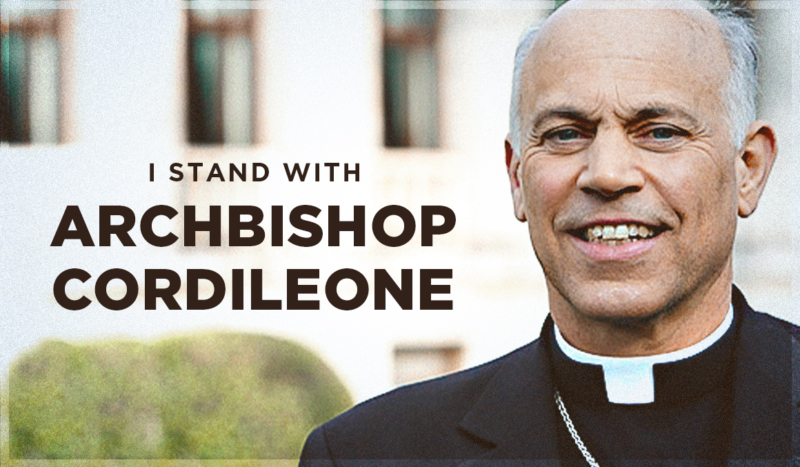 CV NEWS FEED // CatholicVote is gathering signatures on a pledge for Catholics to express their support for Archbishop Salvatore Cordileone of the Archdiocese of San Francisco.

After the archbishop announced he would deny Communion to Speaker of the House Nancy Pelosi, D-CA, he gained the support of a number of fellow bishops throughout the U.S. CatholicVote’s pledge invites lay Catholics to join that growing list of bishops in showing their support.

“As her spiritual father and the pastor of her soul, it was his duty to inform her that her unyielding public support for abortion on demand with no exceptions placed her outside of communion with the Church,” the pledge reads in part:

Cordileone acted in union with the whole body of Catholic leaders in America last week.

The pledge also points out the results of CatholicVote’s June 2021 survey of Mass-going Catholics:

83% said they believed Catholic public officials who oppose Church teaching create confusion and disunity, and 74% said such officials should not present themselves for Communion.

“Again, far from acting radically or alone, as some have claimed, Cordileone is leading his flock – including Pelosi – from the heart of the Church,” the pledge continues, pointing out that Cordileone has expressed “respect and affection” for Pelosi, “promising her that he would personally pray and fast for her, looking forward to the joyous day when she, God-willing, returns to full communion with the Church.”

“Those of us who sign this pledge stand with Cordileone. But like him, we also will pray for House Speaker Nancy Pelosi,” the pledge concludes.