Reporter Releases Book on Riots: ‘I Was There’ 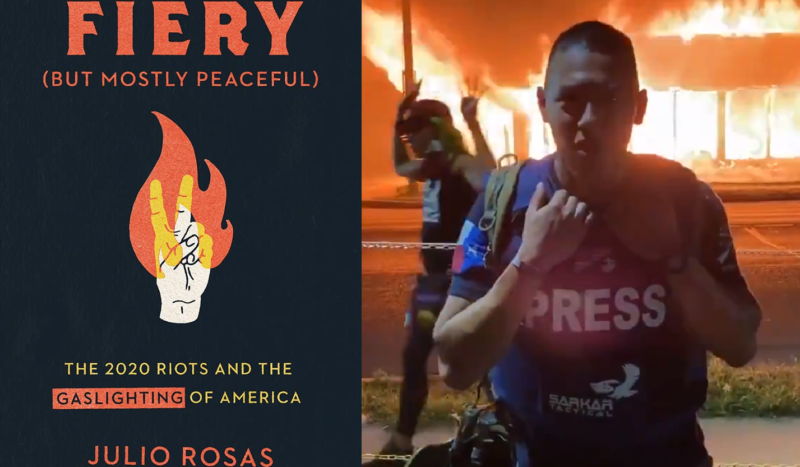 CV NEWS FEED // Julio Rosas, a reporter who has been on the scene at numerous Left-wing riots, wrote a book documenting the mayhem.

Rosas presents the book, set to release in May 2022 and available for preorder now, as an effort to affirm Americans whom corporate media personalities tell not to believe their own eyes.

The title, “Fiery (But Mostly Peaceful),” is a reference to an infamous CNN segment from Kenosha, Wisconsin in 2020. The network’s reporter, standing in the foreground of Kenosha streets literally set ablaze by BLM and Antifa rioters, looked into the camera and described the “protest” as “fiery, but mostly peaceful.”

Hence the book’s subtitle: “The 2020 Riots and the Gaslighting of America.”

“This book is needed,” Rosas told CatholicVote Friday, “because there are those who want to say the BLM and Antifa riots didn’t happen or it was right-wing media exaggerating what happened.”

“I was there,” he added. “I was there for much of it. The violence, fires, and vandalism were real.”

Rosas, a U.S. Marine with a thick skin and a knack for navigating danger, was indeed there. Throughout 2020, his reports became regular features on a number of networks. He is now a senior writer at TownHall.com and appears frequently as an expert commentator about events involving civil unrest with hosts such as Tucker Carlson.

There were many threats of violent rioting from radical Left-wing groups after Kyle Rittenhouse, charged with murder for shooting three rioters in self-defense in Kenosha, Wisconsin last year, received a “not-guilty” verdict Friday. Despite those threats, Rosas traveled to Kenosha to report live on Tucker Carlson’s show.

“I’ve said it from the beginning, the videos speak for themselves,” Rosas told Carlson:

As someone who was there that night, it was pretty evident that Kyle Rittenhouse shot in self-defense. …Thankfully there are no riots here in Kenosha as of right now. But we have to think about why there was even the threat of riots. And it’s because still, even right now as we speak, there is a large portion of the American population that believes in the false media narratives that have been perpetuated since the night it began.

Some observers are calling the jury’s verdict in the Rittenhouse case “a win for white supremacy,” Rosas noted. But “the only evidence we have of someone being racist that night was Joseph Rosenbaum,” whom the then-17-year-old Rittenhouse gunned down after the 36-year-old charged him and threw an object at him. Rosenbaum “was slinging the N-word around like he was some wannabe Soundcloud rapper,” Rosas said, “and I should know that because I filmed him doing that while telling other white people to shoot him.”

“And it’s not just the media,” Rosas added:

We have Democratic politicians … I remember waking up the next day [after the shootings in Kenosha last year] and seeing Congresswoman Presley’s tweet calling [Rittenhouse] a white supremacist, when we had no idea who kyle rittenhouse was at the time.

It is “really aggravating” to see political and media figures misrepresenting what he himself sees in person while reporting at riots, Josas said, but “justice prevailed today.”

Readers can pre-order Julio Rosas’ book “Fiery But Mostly Peaceful: The 2020 Riots and the Gaslighting of America,” due to release May, 2022, by clicking here.