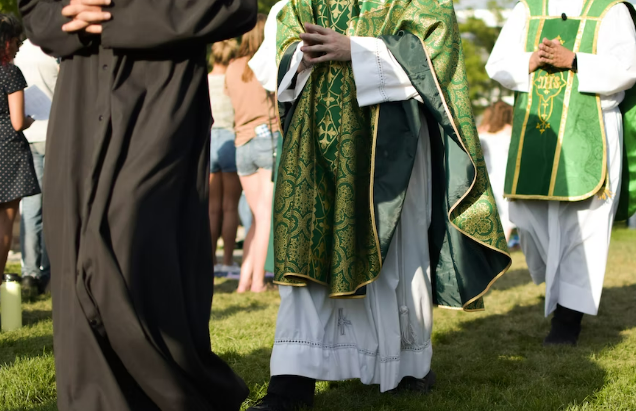 “American Catholic priests are becoming more conservative, even as their flocks are becoming more liberal,” reported Francis X. Rocca for the Wall Street Journal, noting that when the U.S. bishops elected new conservative-leaning leaders last month, they were “continuing to resist a push from Pope Francis to put social issues such as climate change and poverty on par with the bishops’ declared priority of opposing abortion.”

The United States Conference of Catholic Bishops’ orientation “reflects the wider trend” among American clergy, Rocca pointed out, and one that is especially pronounced among the newest crop of prelates:

Research on Catholic clergy by the Austin Institute has found that younger Catholic priests and priests ordained in more recent years tend to be noticeably more conservative than older priests on a host of issues, including politics, theology and moral teaching. The Survey of American Catholic Priests has found that since the 1980s, successive cohorts of priests have grown more conservative, according to a 2021 summary report.

Rocca’s report and the new research from the Austin Institute comes shortly after the Catholic University of America (CUA) released a study on the state of the Catholic priesthood in America which showed a clergy confident in their vocations but skeptical of Church leadership.

Most priests reported that they are “flourishing” in their ministry, according to the CUA survey, but they don’t trust their bishops. Fewer than half of respondents in the survey had “quite a lot” or “a great deal” of confidence in their bishop. When asked about the U.S bishops as a group, that number fell to 24%.

The study stated that the “lack of trust in bishops” was due to priests coming to see their bishops “less as fathers and brothers than as administrators.” Notably, the CUA report came before the U.S. bishops elected a number of new leaders who are considered to be markedly conservative.

In his report, Rocca cited comments from younger priests and the mentors in the priesthood who encourage them.

“People are looking for answers and stability,” said Fr. Daniel Hess, dean of students at Mount St. Mary’s Seminary and School of Theology in Cincinnati. “There actually is a treasury of teachings and of truths and of deeply Catholic content that is part of our inheritance that was not even shown to us or known, and it’s sort of being rediscovered. So I think in some ways that leads to a certain traditionalism or conservative approach.” Hess was ordained in 2011.

Fr. Benjamin Petty, campus chaplain at George Washington University in Washington, D.C., was ordained in 2019. “Today’s society has this aggressive sense of nothing’s really true unless you make it up yourself,” Petty said. “So the church and her teaching and her consistency and moral voice is this place of stability, place of security, place of safety to receive something good and old.”

“According to the Rev. Ezra Sullivan, an American who was ordained in 2011 and teaches at the Pontifical University of Saint Thomas Aquinas in Rome, the youngest U.S. priests are a postmodern generation disillusioned with the ideas of progress and religious pluralism that found favor at Vatican II,” Rocca wrote. “Instead of focusing on interfaith dialogue for the sake of social justice, these priests are more likely to stress the reinforcement of Catholic identity and the winning of converts, said Father Sullivan, author of ‘Alter Christus,’ a new book about the priesthood.”

Fr. Nathan Rueb (ordained in 2019) of Kansas City, Missouri, spoke favorably of the U.S. bishops recent continuation of a statement that the Church’s “preeminent” moral priority in America is opposition to abortion. “I really don’t know any priests at all who would disagree,” Rueb said. “Babies in the womb are the most defenseless members of society… How can I help them if they’re born into poverty if they’re not even born into poverty?”