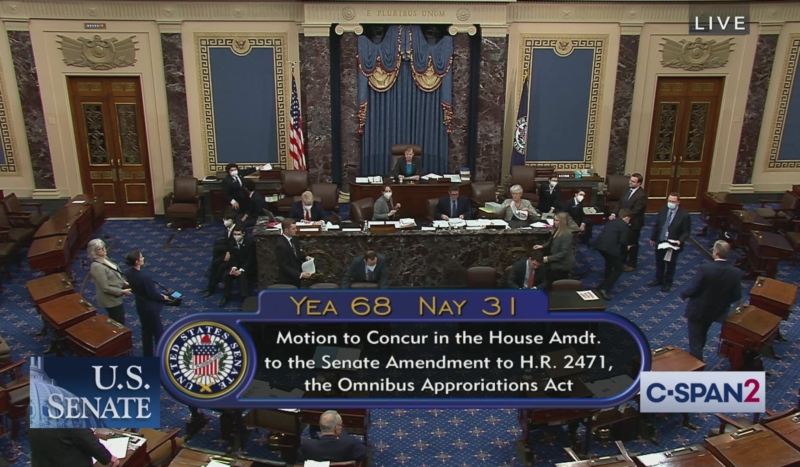 CatholicVote Director of Government Affairs Tom McClusky, however, points out that there are many aspects of the bill that should still be of grave concern to the pro-life movement.

First, just as a matter of procedure, it was a $1.5 trillion budget that Congress voted on 12 hours after it was introduced, McClusky said Monday:

It’s happened more and more over the past two decades, but Americans shouldn’t allow themselves to accept this as normal. We elect these officials to do a job, and there is no way they are doing that job – of analyzing legislation with a view to our interests and the interests of the least among us – when they have less than a day to go over a 2500-page-plus bill stitched together in a back room.

The process leading up to the passage of the omnibus “was even more secretive than usual,” McClusky observed. “And the handful of writers are proud they kept it secret for so long – proud they kept the American people, and a large majority of elected officials in Congress, out of the process!”

In the House, GOP leadership agreed to “split” the vote so Republicans could vote for defense and not the other spending,” McClusky explained. “However, in the end both votes were tied together so that if one failed they both did.” As a result, “by voting for defense these Republicans allowed everything else to happen.”

As to the substance of the bill, McClusky acknowledged that it “does keep some of the status-quo items that ought to always be non-negotiable,” referring to pro-life provisions like the Hyde amendment. But “celebrating this is like celebrating the sun coming up,” he added. “It was inevitable when you look at the numbers.”

McClusky also counted as a “major victory” the fact that the bill kept the traditional funding streams for Planned Parenthood “at an even level,” rather than raising them. At the same time, he warned that the bill’s Title X and “international family planning” clauses could translate to “hundreds of millions still going to bad actors through these streams.”

In addition, by including the latest version of the Violence Against Women Act (VAWA) in the omnibus, the abortion lobby managed to “solidify old and new grants that Planned Parenthood can now get.”

McClusky also pointed out that pro-family advocates took a “big hit” when it came to matters of “sexual orientation” and “gender identity” – words which appear too much in the omnibus. In the name of including and catering to the LGBTQ movement, “millions of dollars in earmarks will now go to anti-family groups,” including via the provisions in VAWA. That piece of legislation even “refuses to protect women in battered women’s shelters from having to share their space with men who claim to be women,” McClusky said, adding: “Meanwhile, the word ‘woman’ was deliberately stricken from the text of VAWA” in favor of non-sex-specific language.

While McClusky believes the pro-life movement should be proud of the few pro-life victories the omnibus bill represents, he also said he would encourage pro-lifers to take the funding package as a reminder to be more vigilant than ever. “You and the organizations you support might sincerely care for the American family, for our culture, and for the unborn,” he said, “but don’t let that make you complacent. You can’t assume everyone at the capital is as committed as you are just because they said so when they campaigned for election.”

It is very important, McClusky said, for voters and for organizations like CatholicVote to “always hold our elected officials’ feet to the fire” when it comes to the issues that matter most. “They need to hear from you more than they hear from the sleazy lobbyists and cynical political operatives that hang around D.C.”