New Book: A New Catholic Moment: Donald Trump and the Politics of the Common Good 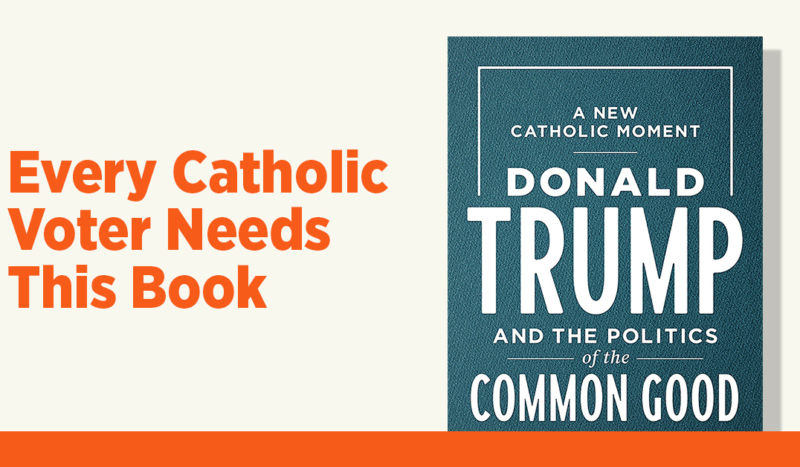 New Book: A New Catholic Moment: Donald Trump and the Politics of the Common Good

Trump is only choice for Catholic voters in 2020

Madison, WI, October21, 2020: the winner of the Catholic vote has won all but one presidential election since 1976.  Our nation is now preparing to cast votes in one of the most consequential elections in our history, and the Catholic vote will again be decisive.  Traditional categories used to explain Catholic voters are no longer helpful.  Instead, Donald Trump has created a new Catholic moment.

With this in mind, Brian Burch, President of CatholicVote—a national faith-based advocacy organization—released A New Catholic Moment: Donald Trump and the Politics of the Common Good (CatholicVote Publishing; September 23, 2020). The book argues that despite Joe Biden’s own Catholic religious identity, it is in fact Donald Trump who is the best choice for Catholics.

A New Catholic Moment explores President Trump’s legacy as a champion for life, the family, religious liberty, domestic patriotism, foreign policy realism, and common-good capitalism. In short, Donald Trump’s politics are remarkably consistent with Catholic social teaching, with both solidarity and subsidiarity, in a way that both Democrats and Republicans have ignored for decades.

“Donald Trump has sketched the outlines of a new and different kind of politics. It is a politics that, until the COVID-19 crisis, was measuring its success in terms of universal employment for Americans of all races and backgrounds and rapidly rising wage levels at the bottom of the income distribution. It is a politics that seeks to overcome divisive identity politics by rejecting its intersectional exaggerations and distortions, and championing instead the American common good. It is a politics that aims to make our common American citizenship more rather than less important to us. And it is a politics that aims to lead America out of the current economic collapse with a new economics of restored industrial strength ‘onshore,’” Brian Burch writes in A New Catholic Moment.

“It is a politics that, as we have shown, is remarkably resonant with Catholic social teaching,” Burch continues. “It is a politics that is ultimately popular among common sense Americans, sometimes wildly popular. And that may be why, for the past four years, there has been so concerted an effort to make all our politics about Donald Trump, the man, rather than about his policy agenda. Those with a vested interest in the status quo did not want to admit even the possibility of choosing a different path.”

“When President Trump’s policy agenda is better understood,” Brian Burch writers, “and when we compare his presidency with the alternative, it becomes crystal clear that Catholics can in good conscience support the president. Indeed, in 2020, Donald Trump is Catholics’ best choice—perhaps our only choice.”

As prominent Christian cleric and writer Richard Neuhaus said thirty years ago, the nation was experiencing “a Catholic moment.” In this moment the Catholic Church was uniquely positioned to influence public life in an unprecedented manner. Today, the country is faced with “a new Catholic moment,” a possibility for a common good political realignment, one that is being realized under Donald Trump.

Over 50,000 copies of the book have been distributed to Catholic leaders and voters in key states over the past 3 weeks.

Read an exclusive excerpt from the book in the American Conservative here: https://www.theamericanconservative.com/articles/catholic-trump-common-good/

Read a review of the book by Rusty Reno, Editor of First Things, at the American Compass here: https://americancompass.org/the-commons/from-freedom-to-solidarity-on-the-american-right/

Purchase a copy of the book here: https://www.amazon.com/dp/B08JHVTYVP

Brian Burch is the President and Co-Founder of CatholicVote.org (CV), a national faith-based advocacy organization headquartered in Madison, WI. CV was founded to organize, inspire and mobilize the Catholic vote through education, legislative advocacy, and direct political action. Mr. Burch is also the co-author of the American Catholic Almanac, a daily reader of notable American saints, sinners, heroes and rogues that have shaped American public life. The Almanac was published by Doubleday’s Image Books in 2014.To schedule an interview with Brian Burch, please contact Drew Bowling at drewbowling1234@gmail.com