Poll of Catholic Voters Shows Shifts Ahead of Midterms 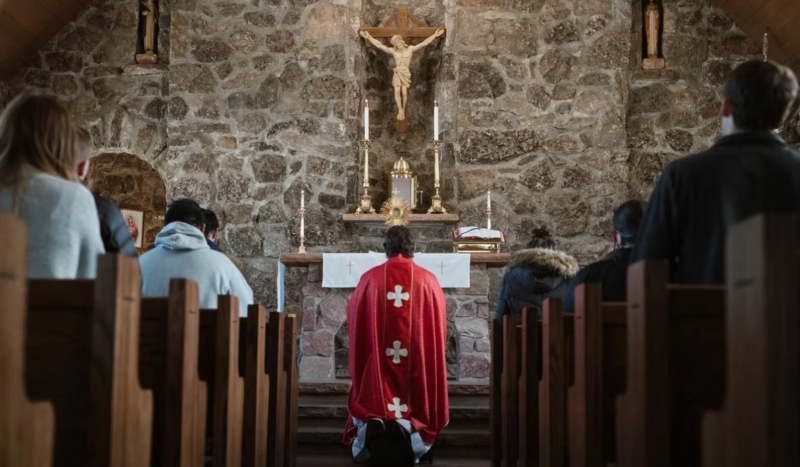 CV NEWS FEED //  New polling data show Catholics are divided over the midterm elections. While 44% of likely voters who identify as Catholic indicate support for Republicans in their district, 43% support Democrats.

Fifty-nine percent of all Catholics think the country is on the wrong track – an overall low compared to the national average of over 75% of voters who say that the country is off course.

“Overall, Catholic voters today are a far cry from the Democratic voting bloc that helped propel John F. Kennedy, the first and only Roman Catholic to serve as president, to the White House in 1960,” reported Susan Crabtree of RealClearPolitics:

In fact, the political ideology of the 1,757 surveyed skews more conservative or lean conservative than liberal or lean liberal by a margin of 40% to 34%. More voters identified as Democrat (42%) than Republican (38%), but 20% considered themselves independent or unaffiliated with either party.

Over one in five voters in America identify as Catholic, so the split numbers revealed in this poll show that the Catholic vote remains crucial in the upcoming midterm elections – with neither party currently holding a clear advantage.

The poll also showed that since his election in 2020, President Joe Biden has lost a considerable portion of his 2020 lead among Catholic voters.

Biden took the Catholic vote by 52% to 47% two years ago. Now, only 47% of Catholics approve of Biden’s performance, while 53% disapprove.

The Catholic vote also comes out similarly split regarding former President Donald Trump. Forty-nine percent hold a favorable view of him and 49% hold an unfavorable one.

Regarding specifics, 57% of Catholic voters said they had little to no confidence that the Biden administration will be capable of reducing inflation in the next year. Thirty-six percent say that Biden and his policies are what’s to blame for the state of the American economy, while 33% said it is the war in Ukraine that is causing the turmoil, and 25% said that both are at fault.

When it comes to abortion, 47% of Catholics claim they are opposed to the overturning of Roe vs. Wade, while 42% support the decision. Party affiliation made all the difference on that question, however. Catholic Republicans supported the reversal of Roe by a margin of 52%-36%, while Catholic Democrats opposed the reversal by 58%-33%. Nonetheless, 65% of Catholics in both parties acknowledged that abortion conflicts with the teaching of the Catholic Church.

The updated information shows that even though the vast majority of Catholics oppose completely unrestricted access to abortion, more voters are shifting away from Catholic doctrine, which is utterly against abortion in its entirety.

On the issue of gender. 63% of Catholics said that gender is created by God, rather than determined by individuals, while 25% thought otherwise. 56% of those polled said that allowing transgender people onto girls’ sports teams would go against Church teaching.

Among Catholic voters who are parents of school-aged kids, 33% said that they have sought alternative education options due to the emphasis on gender identity in their children’s schools.

Readers can find the new poll and a full analysis here.