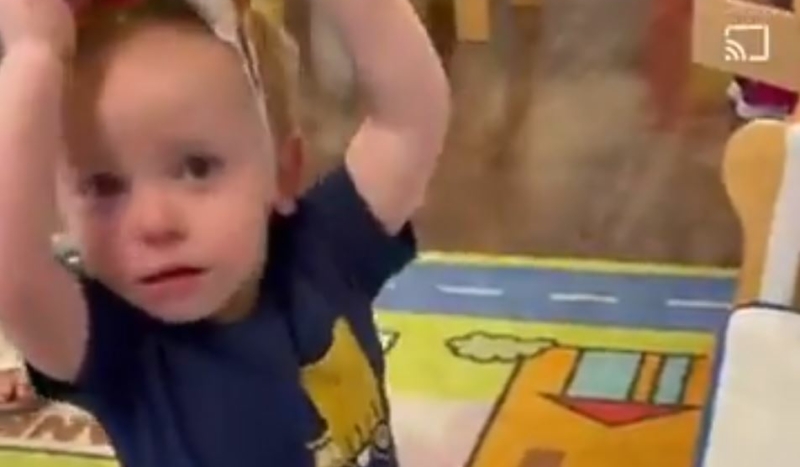 CV NEWS FEED // A viral video showing a toddler crying and resisting as daycare workers repeatedly try to keep a mask over his face has outraged many, leading to renewed denunciations of mask mandates such as the one instituted by New York Gov. Kathy Hochul last week.

The video was originally posted by a New York mother, according to TheBlaze. “This is my poor kid at daycare today so I can work,” the mother wrote, and included the hashtags “#breaksmyheart, #governorhochulthiswontwork, #whyarewepunishingbabies.”

The mother added: “…I’m not upset with his daycare they are attempting to comply with the mandate. I love where he is. I’m pissed [at] our governor and OCFS who think mandating two year old to wear a mask 7-10 hours a day is at all necessary. #unmaskourbabies.”

Another New York mother shared the video on Twitter, adding “THIS IS CHILD ABUSE.” In addition, she tweeted at Gov. Hochul: “YOU ARE A CHILD ABUSER.”

Others quickly joined in, moved by the young child’s misery in the video.

“Child maskers are terrible human beings and should be shamed,” wrote Jon Schweppe of the American Principles Project.

“You can take your mask off if you are eating or drinking on a plane. Or at a restaurant. Or if you are a celebrity at the Met,” wrote radio host Rich Zeoli. “Yet we do this to our children.”

Commentator Bari Weiss similarly pointed out the contrast between the child’s pitiable situation and the high-living, mandate-defying lifestyles of political figures who push for mandates like New York’s. “Watch this and think about Gavin Newsom at the French Laundry. Or AOC at the Met Gala. Or [San Francisco Mayor] London Breed partying weekend at the nightclub in the Tenderloin,” she wrote.

A number of Republican political figures also denounced the masking mandate the little boy was being subjected to.

“It’s as though they’re just trying to break us at this point,” tweeted Donald Trump, Jr. in response to the video. “Don’t let them.”

Ohio Republican U.S. Senate candidate J.D. Vance shared the video with his followers, adding only: “May God forgive us for doing this to our kids.”

Readers can find the video of the boy below.