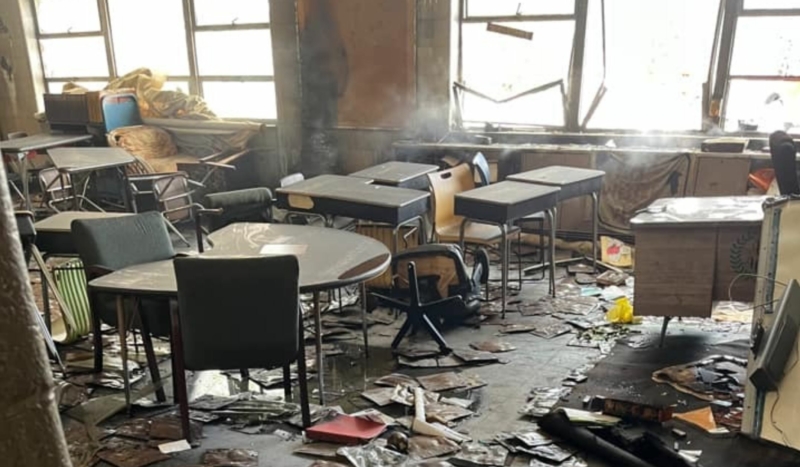 An investigator estimated that the Catholic school will have to deal with upwards of $1 million in damage. “As the church bulletin posted on their website points out, this comes just a couple of weeks after someone vandalized the school’s St Anthony of Padua statue, knocking it over a pedestal,” reported ABC News 5 Cleveland. “Investigators with Parma Police told News 5 that as of right now, it doesn’t appear the two crimes are connected.”

“As a school community, we are truly heartbroken by the events of today,” the school stated in an announcement to the community. “Your continued support is cherished and greatly appreciated. With God by our side, we will prevail.”

Only 48 hours before last Saturday’s arson case at St. Anthony of Padua Elementary School, a statue of the Holy Family disappeared from a Catholic parish in San Antonio, TX.

“The concrete statue depicting Joseph, Mary, and Jesus was missing from outside St. Margaret Mary Catholic Church as of the morning of Feb. 17,” the Catholic News Agency reported. “The statue weighs over 300 pounds, and was likely taken by a team of multiple people.”

“It represents a great deal to the community,” Fr. Jimmy Drennan, the parish’s pastor, told CNA:

“The image of the Holy Family represents the unity of the community as one family.” “We must first pray for those who have stolen the statue, and then do whatever we can to have it returned,” the priest continued. “We want them to know our doors are always open and that they are a part of this community. We love them and we just want the statue back.”

These incidents, which all took place within days, are only the latest examples of what CatholicVote President Brian Burch recently called a “disturbing rash of attacks on Catholic symbols, shrines, statues, and churches across the country.”

In a December 2021 letter to the Attorney General Merrick Garland, Burch called on the Department of Justice to investigate. “Since May 2020, the U.S. bishops have documented at least 114 instances of arson, vandalism and desecration against Catholicism across 29 states – and now in Washington, DC, itself,” Burch said at the time. “We haven’t seen widespread vandalism against the Church like this since the rise of the Ku Klux Klan.”

The DOJ replied to the CatholicVote letter some weeks later, offering assurances that the agency would review the matter.

In a letter to Burch, Associate Attorney General Vanita Gupta stated: “We share your concern with and commitment to preventing and addressing acts of vandalism, property destruction, and other incidents that target religious symbols, shrines, statues, or churches.”

“The Department is taking numerous steps to address such violence, consistent with our commitment to combat unlawful acts of hate in all their forms,” she added.