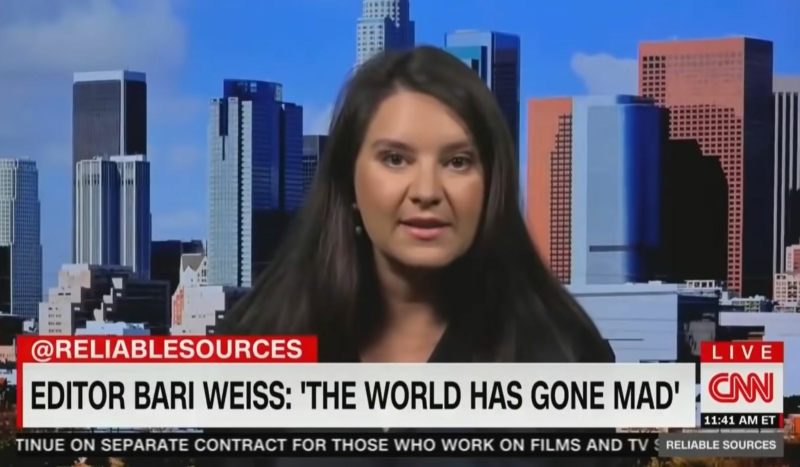 “You write ‘There are tens of millions of Americans who aren’t on the hard left or the hard right who feel that the world has gone mad,’” said Stelter, referencing a piece by Weiss. “So in what ways has the world gone mad?”

when you have the chief reporter on the beat of COVID for the New York Times talking about how questioning or pursuing the question of the lab leak is racist, the world has gone mad.

When you’re not able to say out loud and in public that there are differences between men and women, the world has gone mad.

When we’re not allowed to acknowledge that rioting is rioting and it is bad, and that silence is not violence but violence is violence, the world has gone mad.

When we’re not able to say that Hunter Biden’s laptop is a story worth pursuing, the world has gone mad.

When in the name of progress young schoolchildren as young as kindergarten are being separated in public schools because of their race and that is called progress rather than segregation — the world has gone mad.”

“And there are dozens of examples that I could share with you and your viewers but, everyone sort of knows this….” Weiss continued, before Stelter interjected.

Stelter pointed out that Weiss has said people are “not allowed” or “not able” to discuss certain things openly, but “who’s the people stopping the conversation, who are they?” he asked.

“People that work at networks frankly like the one I’m speaking on right now,” Weiss began. Stelter interjected again. “I just think it’s a provocative thing to say … you say ‘we’re not allowed to talk about these things,’ but they’re all over the internet, I can Google them, I can find them everywhere. I’ve heard about every story you’ve mentioned, so I’m just suggesting, of course, people are allowed to cover whatever they wanna cover.”

But you and I both know and it would be delusional to claim otherwise that touching your finger to an increasing number of subjects that have been deemed third-rail by the mainstream institutions and increasingly by some of the tech companies will lead to reputational damage, perhaps you losing your job, your children sometimes being demonized as well. And so what happens is a kind of internal self-censorship. This is something that I saw over and over again when I was at the New York Times.

The Media Research Center shared a clip of the interview on social media, and many on both sides of the political aisle shared it. A number of people commented on the significance of what Weiss had said given her status as a lesbian, a liberal, and a veteran of establishment media institutions like the New York Times — where she once served as an opinion editor.

Readers can find the exchange between Weiss and Stelter below.