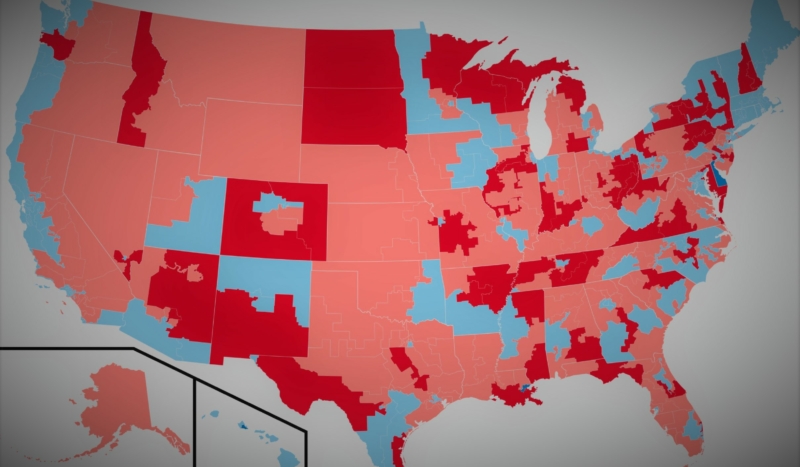 CV NEWS FEED // A liberal author who once touted the inevitability of a Democratic majority due to Hispanic population growth is now writing that the opposite may soon be the case.

“Turning to the nature and size of recent Hispanic shifts against the Democrats,” Ruy Teixeira warned Democrats in a Thursday essay, “it’s not as bad as you think, it’s worse.”

Teixeira is the co-author of the 2002 book “The Emerging Democratic Majority,” in which he argued that Democrats were heading for electoral dominance because Latinos could be relied upon to vote Democratic.

After examining the real-world trends of recent years, however, Teixeira believes the future of the Democratic Party is very dim — precisely thanks to Hispanic voters’ distaste for the party’s policy positions.

The “biggest single driver of the increased nonwhite population is the growth of the Hispanic population,” Teixeira explained:

They are by far the largest group within the Census-designated nonwhite population (19 percent vs. 12 percent for blacks). …[V]oting trends among this group will decisively shape voting trends among nonwhites in the future since their share of voters will continue to increase while black voter share is expected to remain roughly constant.

“It therefore follows that, if Hispanic voting trends continue to move steadily against the Democrats, the pro-Democratic effect of nonwhite population growth will be blunted, if not cancelled out entirely,” he wrote.

Teixeira then laid out ten trends showing that Hispanic voters are indeed abandoning the Democratic loyalty that liberals depend on.

First, a recent Wall Street Journal poll found that “Hispanic voters were split evenly between Democrats and Republicans in the 2022 generic Congressional ballot.”

And in a 2024 hypothetical rematch between Trump and Biden, these voters favored Biden by only a single point. This is among a voter group that favored Biden over Trump in 2020 by 26 points according to Catalist (two party vote).

Hispanics in the poll favor Republicans in Congress over Democrats on containing inflation and securing the border. They are strongly negative on the economy, with just 25 percent believing it is headed in the right direction, compared to 63 percent who believe it is headed in the wrong direction.

Third, a recent FiveThirtyEight analysis showed “while Biden has lost support among all racial groups in the last 9 months, the decline has been sharpest among Hispanics.”

Fourth, Biden’s ratings among Hispanics in Texas, “perhaps the Democrats’ most prized target for their theory of the case,” have been “dreadful.”

Teixeira’s sixth point was that in 2020, after four years of Trump, Hispanics “gave him substantially more support than they did in 2016” — specifically, “an amazingly large 16 point margin shift toward Trump,” according to Catalist.

Eighth, Teixeira noted a “particularly poor performance for Biden among working class (noncollege) Hispanics, with these voters giving Trump a remarkable 41 percent of their vote in 2020,” according to Pew-validated voter data. And those data are especially “significant” given that 80 percent of the Hispanic electorate are working class.

Ninth, Teixeira pointed to New York City’s 2020 voting data, which showed that precincts “where at least 50% of residents are Hispanic swung toward Trump by 18 points, with a quarter of voters now backing him for reelection.” That shift “was even more pronounced in precincts where at least 75% of residents are Hispanic, which had a swing of 25 points toward Trump,” Teixeira added, and: “Out of all the ethnic enclaves in Queens, Hispanic areas showed the largest movement away from Democrats in 2020, a result consistent with national patterns.”

Finally, Teixeira concluded that “Democrats have seriously erred by lumping Hispanics in with ‘people of color’,” and attempting to woo them with racialist political rhetoric:

Clearly, this constituency does not harbor particularly radical views on the nature of American society and its supposed intrinsic racism and white supremacy. They are instead a patriotic, upwardly mobile, working class group with quite practical and down to earth concerns. Democrats will either learn to focus on that or they will continue to lose ground among this vital group of voters.

Readers can find Teixeira’s full essay, in which he also examines what polling indicates Hispanic voters do care about, by clicking here.