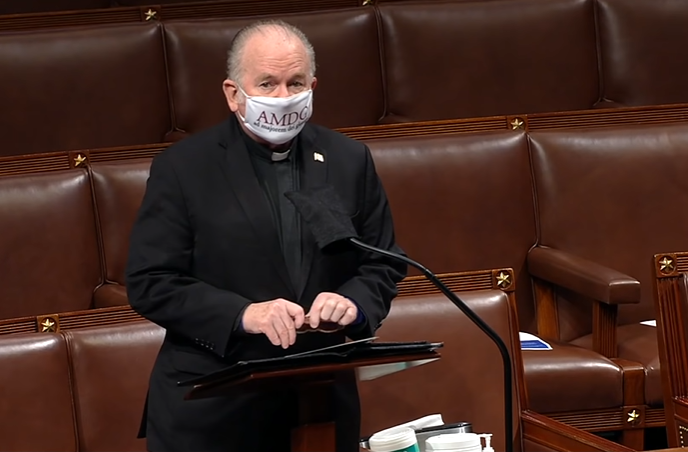 CV NEWS FEED // Former U.S. House Chaplain Fr. Pat Conroy condemned the January “insurrection” and claimed Catholics should not try to stop abortions in an interview with the Washington Post on Thursday.

Fr. Conroy has now “had a chance to reflect on changes that led to the insurrection and to a changed America,” wrote Washington Post’s Michelle Boorstein in an introduction to the interview. He “talks for the first time in his career about abortion law and why Catholicism respects a woman’s right to choose,” she added.

The Jesuit priest and longtime chaplain retired from his role in Congress just before the events of January 6, 2021. Asked what prayer he might have prayed if he were there after the riot, Fr. Conroy offered: “Lord we’ve had a terrible spirit in this building, send your spirit of peace and of healing and of reconciliation in a place badly in need of it.”

“On Jan. 6 I was in quarantine, as a member of our Jesuit community had tested positive,” Conroy said. “I was waiting as well for my second Pfizer shot on Jan. 11.”

Conroy went on to speak about how “apocalyptic” rhetoric tries to keep people in “fear,” which is “negative energies” that will not lead to a “positive future.” “Stop the judgment, stop the anger, stop the blame,” he said.

The Washington Post asked Conroy about the pro-abortion Catholic members of Congress who wrote a letter resisting the United States Council of Catholic Bishops last year. They produced the letter as an answer to the Bishops’ decision to draft a teaching document on the importance of the Eucharist – which it was rumored would also reassert the Church’s teaching against receiving Communion while formally opposing Catholic teachings on grave issues like abortion.

It’s an American value that each one of us can choose where our life is going. That happens to be a Catholic value, too. That we should all use our gifts and our talents and our intelligence as best we can to make the best choices we have the freedom to make.

“Sometimes we don’t have the freedom to make really important choices because of fear, because of oppression, because of poverty, because of all kinds of things,” Conroy went on. “Choice is a highly American value and it’s a church value. [Twelfth-century Italian priest and Catholic philosophical giant] Thomas Aquinas says if your conscience says to do something the church says is a sin, you are bound to follow your conscience. That’s Thomas Aquinas!”

Conroy said that a “good Catholic” in America should say: “Given women in our system have this constitutional right, our task as fellow Christians, or as Catholics, is to make it possible for her to optimize her ability to make the choice.”

Conroy lamented that, though in his view “a pro-choice Democrat isn’t a pro-abortion person … immediately any pro-choice Democrat is judged as pro-abortion.” He said that “there is no debate, in my mind, about the tragedy of abortion.” The “system” should work hard to help women choose not to abort, but “she is the one to make her choice; we should not make it for her.”

The Washington Post went on to ask Conroy what he thought was the meaning of “Joe Biden’s 2020 campaign slogan” – that the 2020 presidential race was a “battle for the soul of America.”

We have a heavily divided country on whether we have it or need it. The notion just baffles me, considering the history of who has actually been forgotten by our system from day one and it isn’t White people.

Critics will likely view some of Fr. Conroy’s remarks as widely out of step with the teachings of the Church. The U.S. bishops have regularly found themselves in confrontations with the Biden administration and Democrats, who seem to have taken the 2020 elections as a new mandate for pushing the envelope on abortion.

As recently as September 2021, Pope Francis repeatedly said that “abortion is murder,” and compared the accepting abortion to “accepting daily murder.” He also spoke in explicit language against treating human life as “waste material.”