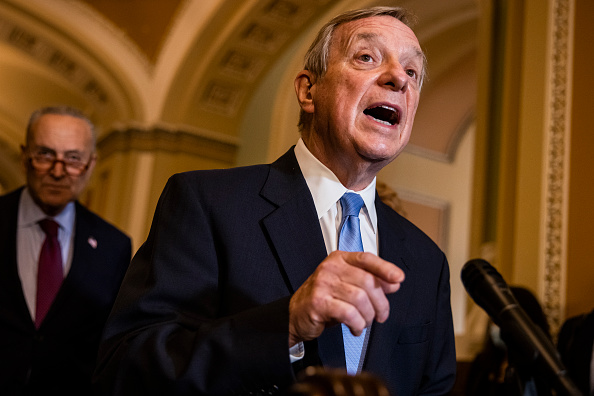 CV NEWS FEED // The Jesuit publication America magazine published an interview with Catholic Democrat Sen. Dick Durbin of Illinois in which the senator complained of being denied Communion due to his pro-abortion stance.

In the article, Jesuit priest and America magazine associate editor Jim McDermott addressed himself sympathetically to Durbin. McDermott also framed the interview with references to an upcoming meeting of the U.S. bishops, where they will discuss whether Catholic politicians who support abortion should present themselves for Communion.

“For the last 17 years, Senator Durbin has been unable to receive Communion in his home diocese in Springfield, Ill,” McDermott explained:

In April 2004 his pastor Monsignor Kevin Vann (now the bishop of Orange County, Calif.) said he would be “reticent” to give Mr. Durbin Communion on the basis of his pro-choice political voting record. At the time, then-bishop of Springfield, Ill., George J. Lucas, supported Father Vann’s action. Current Bishop Thomas J. Paprocki has maintained that position and banned other local pro-choice politicians from receiving Communion as well.

“In June the U.S. bishops voted 168 to 55 to draft a teaching document on the Eucharist,” wrote McDermott. “With the U.S.C.C.B. preparing to review that document next week at its annual fall meeting, I reached out to Mr. Durbin to discuss his experiences as a Catholic politician and how he assesses the decision of some bishops to deny Communion to some Catholics.”

Durbin “spoke frankly about how being denied Communion in his own diocese has made going into any church a fraught and uncomfortable experience and of his frustration with the way the bishops seem to be using the Eucharist for political purposes,” McDermott wrote.

“The pope recently commented about not refusing anyone Communion. And I’ve been wondering what it’s been like to be a Catholic politician who has been refused Communion because of a pro-choice voting record. How has that experience been for you?” McDermott asked Durbin.

“It’s not a happy experience,” Durbin replied. “I found another Catholic venue, the Archdiocese of Chicago, and a church where they were willing to let me in and allowed my wife to join me. So it’s become my new faith home.”

Durbin went on to express unease about the majority of U.S. Bishops who “voted in June to consider a document on the Eucharist, which makes me concerned that three quarters of the U.S. bishops think this should be the official policy of the Catholic Church in America.”

Durbin said that it is “fundamentally unfair” that individual bishops can deny Communion to politicians who promote abortion, and pointed out that many Catholics who support abortion receive Communion all the time, but since his record of promoting abortion as a lawmaker is public, he gets singled out — as do other publicly pro-abortion figures.

Durbin went on to complain that it was “entirely out of line” for Archbishop Jose Gomez, the head of the United States Conference of Catholic Bishops (USCCB), to criticize President Biden on his Inauguration Day.

The senator also suggested that many bishops who disapprove of Biden’s promotion of abortion have been hypocritical supporters of former President Donald Trump, despite the fact that Trump was “executing people … just left and right” during his presidency.

When McDermott asked him directly about the upcoming meeting of the U.S. Bishops, Durbin pointed out that it is “interesting” that when the Church “attacks” pro-abortion Democrats, they rarely “turn the tables” and attack the Church — though they could. “Can we think of a few topics where the church is vulnerable? Yes, we can.”

“I don’t have any particular qualification to do this, but if I had to give advice to the church, it strikes me that one of the fundamental issues that they have to deal with is the role of women in the church,” Durbin said:

When you consider what has happened in the world and in the United States, with the emergence of women as leaders and co-equals with men, the church has a long way to go. And I think it’s at the root of some of the difficulties the bishops have, particularly when it comes to issues such as choice.

Durbin went on to speak of his sister-in-law, a former nun who “left the ministry to marry a former priest.”

“They are maintaining a parish in East St. Louis, Ill., almost single-handedly, the two of them, and virtually everyone I know in the area says what a waste that they couldn’t both be priests,” Durbin said. “There should be much fairer treatment when it comes to women and people of different sexual orientations.

“You speak with real feeling about these issues,” McDermott replied.

McDermott also asked Durbin whether he believes there are any circumstances under which a Catholic should be denied Communion.

“Well, it’s been a long time since I took theology classes, but I think the standard for receiving Communion is a well-formed conscience, and where you come down as a result of that, and that is personal to the individual standing at the rail,” Durbin said.

“In the end it is a personal decision to stand at that rail,” he concluded, “and I think with very few exceptions, Communion is offered to anybody if the person believes that they are worthy of it.”