How to Respond When Your Church is Threatened 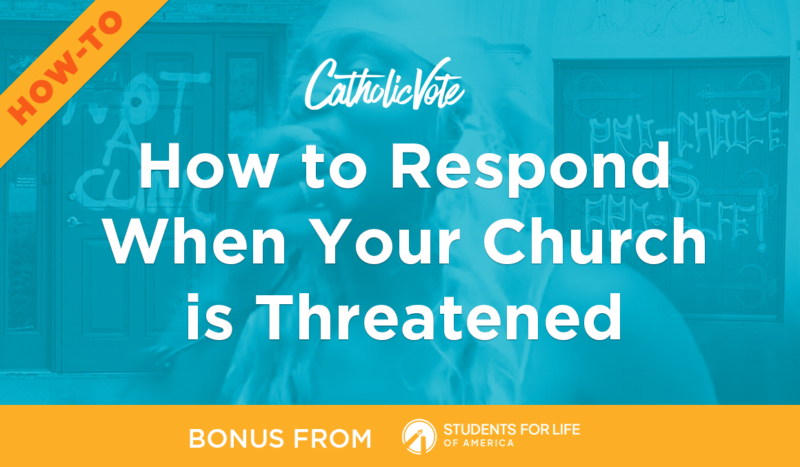 As CatholicVote reported, in the wake of the May 2022 leak of Justice Alito’s Dobbs draft opinion, the wrath of pro-abortion activists was unleashed.

A group called “Ruth Sent Us” (named for the late Supreme Court Justice Ruth Bader Ginsberg) called for disruption and violence in Catholic churches, as well as protests outside the private homes of Supreme Court justices and their families.

As a result, America saw a slew of attacks in Catholic churches, during Mass, outside the buildings, and under the cover of darkness.

Pro-abortion radicals know the Catholic Church has for 2,000 years protected vulnerable mothers and their infants against all odds. And they hate us for it.

Here are six ways Catholics can – and should – respond to threats of violence or vandalism. And what to do if they show up at your church.

Pray and go to Mass.

Threats like those from Ruth Sent Us – a pro-abortion activist group that sent out a national call for violence against Catholic churches – are frightening. For a long time, Catholics have enjoyed a sense of being “accepted” as Americans and protected. And while we still are protected under law, the reality is that anti-Catholic vandalism is on the rise.

But we know that, in Christ, we are more than conquerors. The battle has been won, and our work is to stay united to Christ in the Sacraments and in prayer. Go to Mass in person. And pray your Rosary, which is our greatest weapon against “the powers of this present darkness.”

Pastors are busy – as we all know – and may not be aware of national calls to arms such as those seen in May 2022. Make sure he is aware and feels supported by your courage. Then let the authorities know. Our laws still protect our right to worship without threat or interference. We should call on our law enforcement to do their job.

Many parishes saw their Knights of Columbus take watch duty at entrances and exits before, during, and after Sunday Masses on Mothers’ Day weekend 2022. At other parishes, young adult ministries stood in front of doorways praying the Rosary together while the rest of the faithful attended Mass inside. Often a simple presence is enough to discourage vandals from actually disrupting the Holy Sacrifice of the Mass.

Do not engage in “debate” or physical struggle.

Protesters are trained to create mayhem. They want you to do something that is just as impotent or illegal as what they are doing. Do not engage with them in conversation or shout at them – this is not the time or place for a reasoned conversation about your differences. Unless they are physically threatening someone, do not physically try to move them.

If you are in a Catholic church and witness vandalism or disturbances, take out your smartphone and document it. Don’t engage or try to provoke: if you are documenting, just document. Send your footage to a trusted news source, such as the LOOP, so that it isn’t “lost” or edited by a hostile media outlet. The truth of what happens during these disturbances often helps bring the perpetrators to temporal justice … and also can convert hearts to the Catholic faith by your bold witness!

That’s right. The tradition of singing joyfully in the face of persecution goes back to the earliest Christian martyrs. Accounts of saints from Cecelia to the French Carmelites and Japanese martyrs singing on their way to their deaths – and moving the hearts of their executioners – are our patrimony, and songs should be in our playbook.

Talk with fellow parishioners and decide as a community on a hymn or several hymns that everyone can sing without a cantor. Common songs of praise that most Catholics know one or several verses of include “Holy God,” the Salve Regina, “Immaculate Mary,” and “Holy, Holy, Holy.” Be prepared to witness in song to our confidence and joy as children of God.

BONUS: How to Defend Your Local Pro-Life Center

Sadly, Catholic churches didn’t suffer the worst violence over Mothers’ Day. Two pro-life centers – one in Oregon and another in Wisconsin – were firebombed. So what can we do to support these resources?

First, call your local center to ask them how you can help! In many cases, they will not want a prayer vigil or bouncers – your presence might deter their clients.

Second, pro-life centers always are in thankful for organized prayer efforts, such as novenas or special Masses. Ask you pastor or parish pro-life group how you can help!

Third, donations provide local centers with the means to continue their services and hire protection in the ways they know best. Find and call your local center today to offer your support!