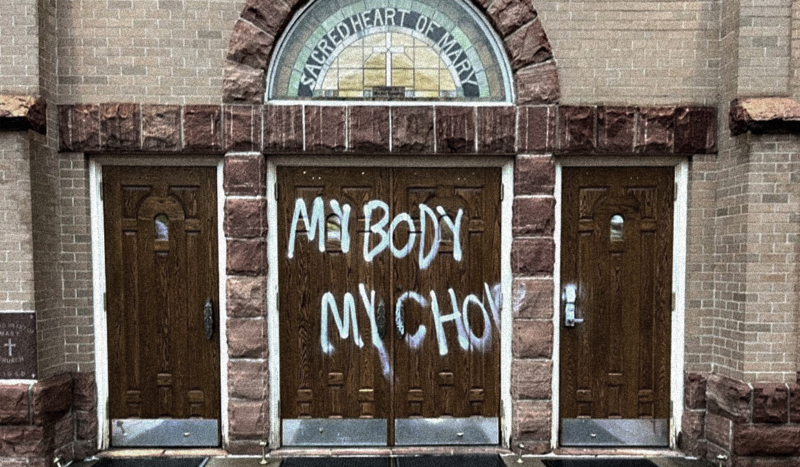 In the wake of this week’s brazen leak of Justice Alito’s Dobbs draft opinion, the wrath of pro-abortion activists has been unleashed.

A group named “Ruth Sent Us” is now calling for disruption and violence in Catholic churches, as well as protests outside the private homes of Supreme Court justices and their families. These radicals even published the justices’ home addresses.

They know the Catholic Church has for 2,000 years protected vulnerable mothers and their infants against all odds. And they hate us for it.

But our “Catholic” president has been silent. He has failed to condemn these domestic terrorist threats against his own people.

So today I called on Joe Biden to speak up now:

Anti-Catholic zealots are plotting to intimidate and harass Catholics across the country, along with justices and their families. This country was built on freedom of speech and freedom of religion. The President of the United States must stand up for both.

These threats follow a record number of attacks on Catholic churches, shrines, and symbols over the past two years. Just this week another Catholic church in Boulder, CO was desecrated by pro-abortion activists. We call on responsible leaders in Washington to unequivocally condemn these dangerous threats before they lead to violence, or worse.

They’re coming for our churches.

In President Biden’s alternative universe, his ‘religion’ nods approvingly at the death of God’s own children. He said so this week, claiming that no mainstream religion has determined when life begins. He even claimed the authority of St. Thomas Aquinas!

As of tonight, the USCCB has not responded.

But we hold fast to the truth taught by our Church: every human life is infinitely precious to God, and that we are in His hands from our conception until the moment He calls us home.

We must pray. I’m asking you to join in prayer with Catholics all over the country.

For the protection of our justices.

For the protection of our churches.

For an end to abortion.

And for the conversion of our persecutors.

This Sunday, my family and I will be in the pew, praying and offering our sacrifices to God under the protection of our Mother Mary. I hope you will join me in spirit.

It’s Mothers Day after all.

P.S. CatholicVote is here for you – we will continue to demand our government fight for your families, faith, and freedom. We wrote to the Department of Justice asking for a full investigation of anti-Catholic attacks, and we will not back down! Help us keep the pressure on our leaders to protect people of faith in our great nation.