How the Green Agenda Hurts the Poor 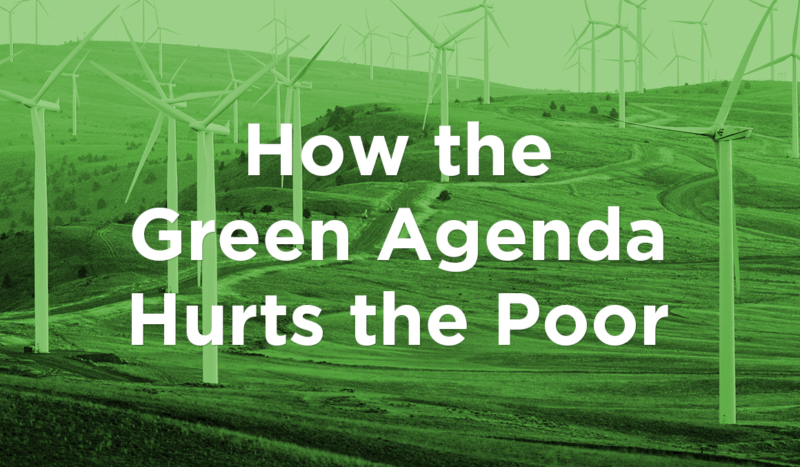 When Senate Majority Leader Chuck Schumer, D-NY, and Sen. Joe Manchin, D-WV, announced their agreement on the Inflation Reduction Act of 2022, they touted the $370 billion earmarked for green energy policies.

The bill promotes the green agenda primarily through tax rebates or credits, and is intended to force American consumers off of fossil fuels. It offers credits to major companies based on emissions reductions, refunds for buyers of alternative/fuel vehicles like EVs, and creates a myriad of other ways to save on taxes if you “go green.”

Progressives tout the bill – and Sen. Manchin’s surprise support for it – as a significant step toward combating climate change. But not much is being said about how rising renewable energy consumption has historically affected Americans, particularly the lower and lower-middle classes.

The most immediate blow for lower-income taxpayers is in the bill itself: The non-partisan Congressional Joint Committee on Taxation analyzed the bill and concluded that it actually increases taxes for Americans making less than $200,000 per year by $11 billion more than for those earning over $400,000.

But that’s only scratching the surface of the heavy costs of renewable energy and the green agenda.

According to a 2020 study by the American Council for an Energy-Efficient Economy (ACEEE), energy costs as a percentage of income are three times higher for low-income families than for the average American family. While the wealthy consume more energy per capita than the poor, the poor pay more for what they consume.

Financial advisors from Dave Ramsey to the American Fair Credit Council (AFCC) recommend families allocate 5 – 10% of their monthly budget for utilities. But energy costs represent over 20% of monthly costs for Americans in the lowest economic brackets.

Poor families suffer most when prices rise, and rising energy costs have a greater impact on their ability to pay for everything else. Basic needs – heating, cooling, transportation, and refrigeration – become unaffordable faster.

A 2019 study by Julius McGee and Patrick Greiner found that renewable energy consumption may indirectly drive what they call “energy poverty” – that is, increasing the number of “households with no or inadequate access to energy services.”

Progressive researchers, activists, and politicians are aware of the threat of energy poverty. The McGee/Greiner study, for example, suggests possible solutions such as programs to weatherize older buildings and taxpayer-funded renewable energy infrastructure in low-income communities.

Green energy proponents often suggest switching to solar power to save on electricity costs. Some politicians suggest that Americans should simply switch to electric vehicles to save on gas.

But these measures have very large up-front costs. For example, an electric car costs on average $10,000 more than a gas-driven car. And lower-to-middle income families rarely have the capital needed to make a drastic change, even if green energy promoters could prove the change would be an improvement with long-term payoffs. In today’s economy, many Americans are living month-to-month as it is. Among those in the lower or middle incomes, many are forced to live on credit.

Americans have faced energy poverty in the past and overcome the odds.

In the 1970s, President Jimmy Carter responded to rising prices with the national Energy Act of 1978, which relied on deregulation to free up the energy sector, increase energy production, and ease supply constraints. President Carter has even been called the “Great Deregulator,” and his strategy, followed by the Reaganomics of the 1980’s, contributed to a lowering of costs over the next decade.

Unfortunately, deregulation has not been the strategy of recent Democratic presidents. In fact, President Biden has made over 25 moves during his term to increase energy regulation. The Environmental Protection Agency (EPA) overturned the Trump administration’s reforms and announced new oil and gas regulations that will cost companies over $1 billion annually.

Progressive activists urge vulnerable Americans to rely on programs such as the Low Income Home Energy Assistance Program (LIHEAP). But this is a stop-gap measure with no long-term support. Programs like this promote a welfare state that guarantees energy inequality for generations to come. They are also abject failures: in 2021 only 1 in 5 eligible families received assistance with energy bills.

There’s no way around it. Alternative energy measures are still luxuries. Many in the upper classes find them attractive because they allow the rich to get richer while gaining prestige for “saving the planet.” But the poor would only get poorer, as the rich drive up the cost of daily living.

In spite of progressive calls for “energy justice,” green energy policies typically focus on controlling emissions rather than increasing energy supplies, driving down costs, and providing affordable energy to the poor.

The proposed shift to renewable energy would be primarily driven by two mechanisms: tax subsidies (or rebates) and regulation. Tax subsidies by their nature favor the wealthy, lowering costs for those who can already afford to install luxuries such as solar panels in their homes.

But to survive, utility companies must recapture losses, and they do so by raising the cost of fossil fuel energy. This in turn means increased utility bills for the lower-middle and lower-income families who still rely on these sources for heating, cooling, lighting, and refrigeration.

When governments decide on lofty climate goals and set aggressive deadlines, officials are forced to enact hardline laws to reach those goals – often without understanding their short- or long-term effects on their citizens. Those effects can be disastrous, particularly for the poor who face dire choices as a result of economic unrest.

Environmental regulations entail increasing government control not only of the energy industry but also of the major users of energy. It’s one thing for governments to regulate commerce between states. It’s quite another for governments to control minute details of vast industries such as transportation, manufacturing, and agriculture — all of which meet basic human needs.

Every federal regulation costs big companies money, and these costs are passed on to the consumer – either in the form of rising prices or the destruction of jobs.

Some of these costs might be justified if the benefits to American citizens outweighed the damage done. But too often progressive policies follow ideologies rather than careful planning with a preferential option for and understanding of the poor.

But we don’t need to guess what aggressive energy regulations will do to our country. The nations of the European Union have already gone down this road, and the results are conclusive.

All EU countries have pledged to achieve greenhouse gas “neutrality” by 2045 through aggressive tax incentives and regulation.

Of all the EU countries, Spain has seen the steepest rise in energy poverty: during the winter of 2022, 10% of Spanish households could not adequately heat their homes.

Germany leads the way in regulatory efforts, boasting the most aggressive green energy regulations in Europe. The progressive government aims to make Germany entirely free of nuclear energy by the end of this year (2022) and coal-free by 2030. By then, Germans will be getting 80% of their energy from “renewables,” or so the plan promises.

The problem is that the regulations are not working.

In 2021, the share of nuclear and coal energy in the power mix actually increased. Even as coal and nuclear plants are shutting down their operations, they are seeing increases in demand of over 7% due to “low output from renewables, and the development in energy and CO2 prices.”

Under pressure from the European Union and Dutch courts, officials in the Netherlands introduced policies in June 2022 by which the ruling coalition intends to cut emissions of pollutants by 50% nationwide by 2030. The plan is to meet this ambitious goal primarily by reducing livestock nitrogen oxides and ammonia emissions through regulations that farmers say will drive them off the land and out of business.

Thousands of Dutch farmers protested through June and July, angered by the government’s callous disregard for their families and livelihoods. The Netherlands is the second largest exporter of agricultural goods in the world.

In a surprisingly candid statement, officials remarked, “The honest message … is that not all farmers can continue their business, and not always in the way that they farm now.”

The overwhelming response from government officials, the EU courts, and energy activists to the victims of Europe’s energy poverty has been the same: your suffering is acceptable collateral damage in our ideological battle.

In spite of historical evidence that green energy policies are unworkable for lower- and even most middle-class citizens in Europe, American progressives are pushing the same policies.

In 2019, in a copy-and-paste from the European Union’s playbook, the state of California mandated that by 2045 100% of the state’s electricity must be generated by renewable resources such as wind or solar power.

This has been an expensive undertaking, and will require the state to increase its energy storage to about 200 times what it currently has. Utility companies have so far found that, while California sometimes produces too much renewable electricity, it doesn’t meet the demands of its customers – demand is much higher in the evenings and summer, for example – so the companies must build storage facilities to even out the supply-and-demand patterns. And those costs are passed directly on to the consumers in the form of higher utility bills that hit lower-income households hardest.

Not everyone is following Europe’s lead, however.

In October 2021, Ugandan President Yoweri K. Museveni rejected Western climate policies in a Wall Street Journal essay, arguing that they “force poverty on Africa.” Western powers invest in wind and solar projects across the African continent, earning them  “praise in the U.S. and Europe” but leaving “many Africans with unreliable and expensive electricity that depends on diesel generators or batteries on overcast or still days.”

Museveni proposed a “better solution … for Africa to move slowly toward a variety of reliable green energy sources,” including “mini hydro technologies” installed along rivers for 24-hour energy, coal-fired power stations with carbon capture features, and nuclear power, which is “also already being put to good use in South Africa, while Algeria, Ghana and Nigeria operate research reactors with the intent of building full-scale nuclear facilities.”

Human ingenuity such as President Museveni promotes has the capacity to solve a myriad of global-scale problems.

Already climate solutions like more efficient engines, electric vehicles, smart appliances, and home-weathering techniques are becoming cheaper and more accessible for lower economic rungs. While they are still luxuries, over time – given a robust economy – these products could filter to all economic strata on their own merits.

In the Netherlands, air-scrubbers and robots now operate in many barns. Improvements have been made to additives that farmers can use to dilute or acidify manure. Greenhouse gases will not be at zero by 2045, but they can be reliably and steadily reduced through innovation and education.

That’s not fast enough or flashy enough for the politicians who have adopted the green agenda into their public campaigns. It’s time, they say, for drastic measures, because if we don’t act fast we will destroy the planet.

In 1989, the United Nations predicted that rising sea levels could wipe “entire nations off the face of the earth by 2000” and New York City’s West Side would be submerged.

Americans should continue to improve energy efficiency and drive down the cost of reliable and clean energy sources through innovation and creativity. But this must not be done by regulatory fiat, policies with too-aggressive timetables, or through tax subsidies that only the wealthiest can access.

Deliberately driving up the cost of fossil fuels will only drive the nation into a full-blown energy poverty crisis that well-off politicians will scarcely feel — even as it crushes the poor.