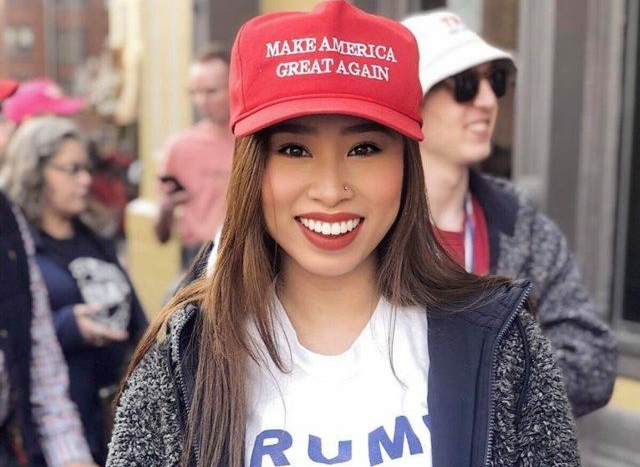 There is a school of thought that aggressive wokeness is what elected Donald Trump in the first place.

It was the Obama Administration’s ham-fisted attempt to force trans-gender bathrooms and locker rooms on schools across America, this argument goes, that pushed blue collar Democrats in the swing states of Minnesota, Iowa, Michigan and Pennsylvania into the Trump camp.

It appears the Chinese-American winner of the Miss Michigan pageant had her title revoked last Thursday for wrongthink.

The winner, Kathy Zhu, 20, a University of Michigan student, committed the unpardonable sin of refusing to wear a hijab in 2018 at a Muslim Student Association booth at the University of Central Florida celebrating World Hijab Day.

A Muslim student offered to let Zhu try on a headscarf. When she politely declined, the Muslim student launched a Twitter campaign to have Zhu expelled.

“Let’s get this girl expelled,” the Muslim student wrote on Twitter. “Email [the office of student conduct] and send them Kathy’s [Zhu] tweet, including the photos in her thread. Ignorance will not be tolerated on my campus.

Declining to wear the hijab wasn’t Zhu’s only sin.

An immigrant from China, she also had the temerity to explain her reasons for not wearing the hijab on social media.

“I said that it was (getting women used to) being oppressed because there are so many women in Middle Eastern countries that are being punished and stoned for refusing to wear a hijab,” Zhu said in an interview. “Nobody is talking about that in the West because all they see is everyone being at peace, but that is the beauty of America.”

It’s clear the totalitarian Left can’t get its ideology straight.

On the one hand, it’s “cultural appropriation” to drink tequila and eat nachos on Cinqo de Mayo… yet refusing to wear a symbol of female domination in Islamic countries is also forbidden.

The final straw for the pageant’s progressive mavens occurred when Zhu admitted that, yes, she supported Donald Trump. A photo posted on her Facebook page shows her wearing a MAGA hat.

“It has been brought to the attention of Miss World America that your social media accounts contain offensive, insensitive and inappropriate content,” wrote Laurie DeJack, state director of MWA Michigan.

DeJack goes on to cite the content rules’ requirement that participants be of “good character” and that their “background” not bring into “disrepute” the Miss World America organization.

The problem is that Zhu, a political science major, is an unabashed conservative who states conservative views.

She has been featured on CBC, RT News, The Rebel, InfoWars, and BBC as a political commentator.

One of Zhu’s social media posts that raised the ire of the woke organizers of the pageant was about black on black gun violence.

When someone on social media blamed black homicide rates on white privilege, Zhu referred to the 2016 FBI statistic that 89.5 percent of African American homicide victims are murdered by other African Americans. For this, Zhu was branded a “racist.”

It goes without saying that Zhu’s precipitous dismissal has triggered a massive backlash among fair-minded people.

The totalitarian Left’s insistence on showing its hand – by the relentless campaign to censor, deplatform and fire anyone and everyone who doesn’t accept its ideology – is backfiring before its very eyes.

Of course, since Twitter, Google, Youtube and yes, Miss World, are all “private companies” – albeit protected by massive tax subsidies and special laws limiting their liability – they can get away with this for a while.

But the price will be high: the re-election of Donald Trump, the possible recapture of the House by the Republicans, and the marginalization of the Democrat Party for the foreseeable future — or at least until it regains its sanity.