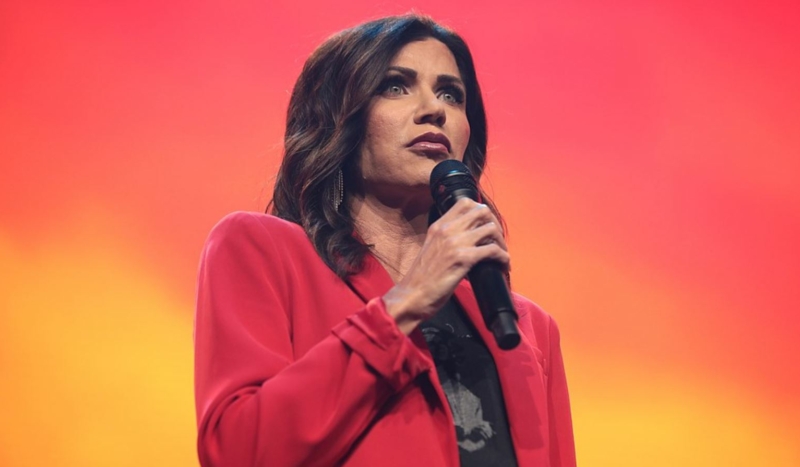 CV NEWS FEED // Gov. Kristi Noem, R-SD, vetoed a bill that would have prohibited biological males from competing in women’s sports, leading to a crushing backlash from her conservative supporters.

In a statement, Noem claimed she still supports House Bill 1217, and that her veto was only a temporary setback for South Dakota legislators, contingent on a few changes pertaining to “style and form.”

But her requested changes, critics argue, would gut the bill and render it almost totally ineffective.

Noam’s requested changes would limit the application of the law to K-12 schools, leaving collegiate women’s sports in the hands of progressive national organizations such as the NCAA (National Collegiate Athletics Association).

Supporters of the bill were blindsided by the move. Many of the bill’s backers were also admirers of Gov. Noem herself, who has come to be known as a courageous leader against the demands of the political and corporate Left.

“Ladies and gentlemen, this is why you don’t bother placating the radical Left,” tweeted Jon Schweppe, director of policy and government affairs for the American Principles Project on Friday. Gov. Noem “has infuriated both sides and nuked her own political future.”

Political pundits have speculated that Noem could be a 2024 formidable Republican presidential candidate. But in light of her decision Friday, that future now seems murky, at best.

Terry Schilling, president of the American Principles Project, concurred. In a series of tweets, Schilling argued that Noem’s decision was “simple.” Either “sign the women’s sports bill” or “cave to the empty threats of woke corporations and the NCAA….”

Schilling went on to point out that there is a “formula” which the social Left has used to advance its priorities over the last seven years:

1. Get corporations, celebrities, and sports leagues to boycott states that pass laws that protect religious freedom, women’s private spaces, and girls sports.
2. Then get the press to cover the boycotts and blame the fake economic losses on the legislation in question.
3. Then the GOP governor caves and goes on an apology tour. (Brewer/Pence)
4. They collect the scalp and use it to keep every other state from passing anything close.

Schilling characterized this pattern as “economic terrorism,” and argued that when governors like Noem fail to stand up to it, the Left’s “demands only get worse.” For example, “it used to be about wedding cakes for gay weddings and now it is over allowing boys to compete against girls.”

The “majority of America” is “sick of this garbage,” Schilling argued. “They want someone to stand up to these insatiable activists.”

“Noem rose to national prominence by standing up to powerful progressives and their economic shut downs — she caught a lot of heat too,” Schilling concluded. Will [she] let that all go to waste by caving on this very simple issue? Boys shouldn’t be in girls sports. Period.”